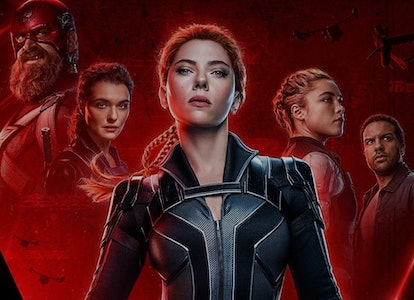 Black Widow has had quite the journey. From the initial trailer release at the 2020 Super Bowl, to multiple delays due to the Covid-19 pandemic, Marvel’s first feature film since Spider-Man: Far From Home is now slated for a July 2021 release — hopefully enough time to allow Marvel fans everywhere to get vaccinated for a safe movie theater experience, or at least shell out for the Disney+ release.

Even a year past when it was originally set for release, we know precious little about the story of Black Widow. For instance, the villain ... we suspect it’s Taskmaster, a classic Marvel villain, who we know will be in Black Widow. What we don’t know is this: who is playing the character?

Perhaps we’re closer to an answer, thanks to a quick chat between Inverse and one of the Marvel movie’s stars.

Mason Accomplished — The actor in question: O.T. Fagbenle, the Handmaid’s Tale star, who is set to appear in Black Widow with a prominent role opposite Scarlett Johansson’s Natasha.

“They have a frisson and chemistry between them.”

Who exactly is Fagbenle playing? Inverse spoke with the actor about The Handmaid’s Tale Season 4 and spent some time picking his brain about his work in the next Marvel movie. Fagbenle, who stars in the Hulu drama as Luke, the estranged husband of Elisabeth Moss’ June, tells Inverse his Black Widow character’s name is Mason, a man tasked with assigning Natasha her deadly missions. What’s more, there may be a romantic history between them.

“They have a frisson and chemistry between them,” says Fagbenle. “He’s a really fun character to play.”

After a long line of half-baked romances with fellow Avengers, could Natasha finally get the suitor she deserves, even if she can’t get her happy ending? Time will tell.

Rumors are flying, however, that Fagbenle’s role isn’t merely Agent Rick Mason, but also the anonymous villain Taskmaster, seen throughout the trailers for Black Widow.

“I’m not allowed to talk about that,” the actor says, bringing up the idea of Taskmaster all on his own, without prompting from Inverse. “I’ve got snipers in the corner, they freaked out I said Taskmaster!”

The Inverse Analysis — There’s a lot of information that can be gleaned from Fagbenle’s take on the character.

First, Mason is definitely a love interest for Natasha Romanoff, whether that’s in their past or something we’ll see develop over the course of the film. Considering Fagbenle’s current role as supportive husband Luke in Handmaid’s Tale, playing the love interest to powerful, badass women is a particular skill of his.

With the Taskmaster mention, it’s possible and perhaps even likely Mason’s allegiances aren’t always going to be with Natasha. Maybe he’s Taskmaster after all. Or maybe it’s a bit more than that — that after years of helping Natasha out, Mason will seek to help himself by aiding the Taskmaster in his villainous deeds.

That’s just our speculation, of course, but can you blame us for getting excited? Marvel fans have waited over a year for this film and there’s barely any information as to what’s in store, so wild speculation is all we have to cling to. Luckily, there isn’t much longer to wait until we see for ourselves if any of these rumors and theories are true. It’s been a long time coming, but Natasha is finally getting her due, even if that means a lover’s betrayal.

Black Widow premieres in theaters and on Disney+ with Premier Access on July 9, 2021.