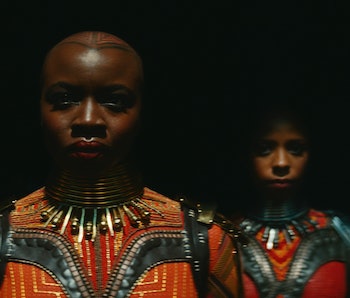 Expectations are understandably high heading into the film, which will not only continue to explore Wakanda’s culture but also pay tribute to Black Panther star Chadwick Boseman, who passed away in 2020. If that wasn’t enough, the sequel is also set to bring Namor (Tenoch Huerta) and Atlantis into the Marvel Cinematic Universe.

While Wakanda Forever’s theatrical release date is still several weeks away, the film’s world premiere took place on Wednesday night. If the reactions coming out of the premiere are to be believed, it sounds like Black Panther director Ryan Coogler has pulled off yet another impressive cinematic feat.

The Early Reactions — The first reactions to Black Panther: Wakanda Forever have mostly been very positive, with many praising the film’s darker, more somber tone, the performances given by its cast members, and its use of new MCU characters like Namor. Several of the early reactions have also, notably, claimed that the film only contains one mid-credits scene.

While no specifics about the film’s sole credits stinger have been released yet, it’s been called “really moving” and “super sweet” by some of the critics who attended the Wakanda Forever premiere.

Just One Post-Credits Scene — The revelation that Black Panther: Wakanda Forever only contains one credits scene will likely come as a surprise to MCU fans. There was a rumor circulating earlier this year that claimed a major comic book villain would make their MCU debut in a post-credits scene.

This update suggests the scene was either scrapped by Ryan Coogler and Marvel, or the rumor itself was never accurate. Either way, it sounds like Wakanda Forever’s sole credits scene ties in further to the film’s emotional core.

It remains to be seen whether the scene is another tribute to Chadwick Boseman’s T’Challa, a game-changing MCU development, or both.

The Inverse Analysis — Until more details are revealed about Black Panther: Wakanda Forever’s mid-credits scene, there’s no way of knowing what might lie in store for audiences after the film’s credits begin to roll. Based on what little has been said about the scene itself, though, it sounds like it will send Wakanda Forever out on a fittingly emotional note.