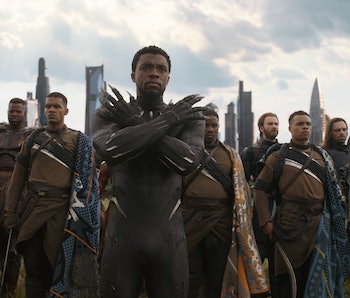 Very little is known about Black Panther: Wakanda Forever. The long-awaited Marvel sequel is set to hit theaters this coming November, nearly five years after the first Black Panther was released in February 2018. However, many fans remain skeptical that it’ll actually premiere this year after experiencing several behind the scenes setbacks and delays.

To make matters even more frustrating, Marvel has released next to nothing about the film’s plot, which means everything fans think they know about its characters and story can be traced back to several unconfirmed leaks and rumors. That said, one new production update claims that fans may see Wakanda Forever visit one surprising location.

The Leak — According to a new report from One Take News, Black Panther: Wakanda Forever is set to film in Puerto Rico sometime soon. The report does not state how long the production will film there, nor does it reveal the reason for the movie’s journey there. The outlet does, however, report that Puerto Rico will be used as a double for Haiti.

Assuming this report is correct, that means a portion of Black Panther: Wakanda Forever’s story will be set in Haiti. While the film could go there for a number of different reasons, there are two possibilities that seem most likely.

Atlantis Confirmed? One of the leading theories surrounding this purported Wakanda Forever leak is that the film’s inclusion of Haiti will be connected to its introduction of Atlantis, as well as its ruler, Namor the Sub-Mariner. Both Atlantis and Namor have long been rumored to be in the Black Panther sequel, though Marvel has yet to confirm the presence of either the villain or his kingdom.

If Atlantis really is in Wakanda Forever, it’d certainly make sense for the film to journey to an island. However, Atlantis isn’t the only reason why Wakanda Forever may go to Haiti.

At the end of Black Panther, T’Challa (Chadwick Boseman) agrees to begin sharing Wakanda’s vibranium technology with the rest of the world. In the film, the Wakandan leader begins that process by creating an outreach center in the Oakland neighborhood where Erik Killmonger (Michael B. Jordan) was made an orphan. With that in mind, it’s possible Wakanda Forever will include a sequence set in Haiti that showcases how Wakanda’s outreach efforts are reaching places no previous Marvel film has visited before.

The Inverse Analysis — Until more official information is released about Black Panther: Wakanda Forever, there’s no way of knowing the context of the film’s alleged Haiti scenes.

It’s possible the location may tie into the film’s heavily rumored Atlantis story. Alternatively, using the location to showcase how widespread Wakanda’s outreach efforts have become would be a great way of honoring T’Challa’s lasting impact in the Marvel Cinematic Universe, which is one of the few things we know Wakanda Forever is focused on.

We’ll probably have to wait a while until we know for sure what the point of this alleged trip is.