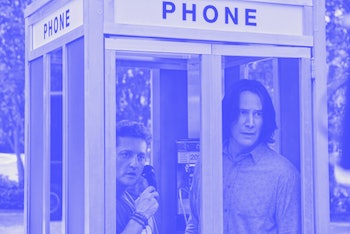 After almost 30 years, Bill and Ted are back, but William S. Preston Esq. and Theodore Logan III are far from the most interesting characters in Bill & Ted Face the Music.

While the movie's core plot focuses on Bill and Ted's attempts to travel into the future and learn the song they'll eventually write to save the universe, the more interesting story is Bill and Ted's daughters (played by Samara Weaving and Brigette Lundy-Paine), who go an adventure back in time to assemble the best band ever.

"They're brilliant in their ability to understand and appreciate music," director Dean Parisot tells Inverse, "and that's quite different than Bill and Ted."

Samara Weaving and Brigette Lundy-Paine are so perfect as Bill and Ted’s daughters. How did you find them? And what was it like working with them?

The second the two of them came in for casting was obvious they were incredibly talented. They were already developing the physicality and the way of talking. The thing they share, they have the same physical attributes and occasional phrasing, but they are their own people, they're different because they're almost musical savants. They're brilliant in their ability to understand and appreciate music. And that's quite different than Bill and Ted. It wasn't really much work though. They were brilliant from the beginning. We had a lot of discussions about it, but they just fell right into it.

The daughters’ plot of this movie sometimes feels like a Bill & Ted greatest hits. They travel through time picking up historical figures, they go to hell. Were you intentionally using those characters to revisit moments from the previous films?

It is a little bit of a nod, but it also is inherent in the entire plot of the movie, which is that they have to put together a band. They’re doing what their dads did, but in a different way. They're reliving the story in a sense that they probably heard as a little kid. So it kind of makes sense, from a narrative perspective but also for those characters.

You made the decision to recast Bill and Ted’s wives. Can you explain why?

Well, in the original, it really wasn’t about the wives, and every movie had recast the roles. We were attempting to contemporize it, but we didn't think that it would be an issue of any kind because they weren't the same. They were big characters in this movie.

It’s true that this version of the characters are much more involved in this movie than in previous ones. What would you say is their most important role in the movie?

I mean, first of all, how do you play the wives of Bill and Ted? For 30 years they put up with that. So the first was they had to be absolutely desperately in love with them. They had to have suffered through Bill and Ted trying to save the world or unite the world for 30 years. So not only do they love them to death, but they're long-suffering. And you also wanted them to be great parents because those kids are fantastic.

We also wanted them to be re-exploring the reasons they got together in the first place, which a lot of couples do as soon as their kids grow up, right? Some couples hold together some don't. So if you look at it just as a movie about middle age, they're going through all the same things we all go through it, which is: Are our kids are growing up? Are they going to have a career? We're now spending all our time with our significant others, and do we have to read to find that relationship? Does it still work? And also, we all thought we were going to do this thing with our lives and we haven't pulled it off yet. All those things destabilize families, and they're very traditional stories to tell. Bill & Ted is no different I think, even though it’s comic.

Bill & Ted Face the Music is available for VOD and in theaters now.