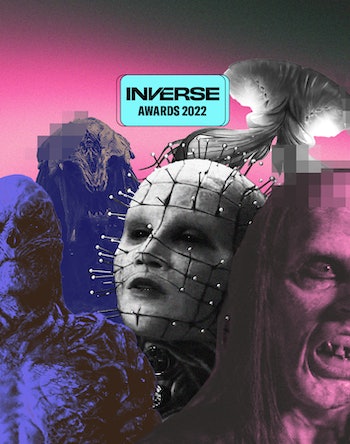 It’s cliché to say that horror is having a moment.

It’s been five years since Jordan Peele’s Get Out redefined the genre and ushered in a new era of serious horror. Since then, fans of the genre have lived through the rise of “elevated horror,” the backlash to “elevated horror,” and the eventual realization that horror is whatever fans want it to be — and whatever sells the most movie tickets. (Horror is seemingly the only genre left capable of filling cinema seats without superheroes or some other pre-existing franchise).

But in 2022, one horror standby does seem to be having a moment: the monster. This year, psychological horror was no longer enough. We needed real, tangible monsters to deliver our scares. And Hollywood was more than happy to oblige.

From original creations like Barbarian and Nope to reboots and prequels like Hellraiser and Prey, 2022 was the year that monsters reclaimed their place at the top of the horror pyramid. Here are the 10 best, scariest, and most thought-provoking monsters of 2022 ranked. (Spoilers ahead!)

After leaning a little too heavily on the Demogorgon and Mind Flayer in recent seasons, Stranger Things introduced an exciting new monster with Vecna. Unlike the demons the gang fought in seasons past, Vecna was intelligent, scheming, and capable of jumping between the Upside Down and the real world of 1980s Hawkins, Indiana. His obsession with stalking his victims, levitating them off the ground, and then twisting their limbs to breaking point gave Stranger Things a much-needed horror boost.

Was that big Vecna twist kind of obvious? It depends on who you ask, but we’re excited to see what happens when Vecna returns for a final showdown in Stranger Things Season 5.

In its third season, Netflix’s sci-fi anthology Love, Death & Robots may have worn a bit thin, but one episode stood out thanks to the direct involvement of series co-creator David Fincher. In his first outing as an LDR director, Fincher told the haunting story of a ship lost at sea that comes under the control of a giant telepathic crab.

Referred to as a “thanapod,” the monster can speak to the crew by controlling the corpse of their own their shipmates. It’s scary stuff, made even spookier when the beast demands meat, and the survivors have to decide who they’ll sacrifice to feed the crab and its growing army of children.

One of the strangest movies of 2022, Alex Garland’s Men felt like a fable in search of a moral. But while the story of a lone woman who’s stalked and hunted by a shapeshifting man-shaped creature across the British countryside might not rank among Garland’s best, the ending alone is worth the price of admission.

When the monster, inspired by ancient sculptures of a legendary being known as Green Man, finally reveals itself, it leads to one of the most bizarre and arresting sequences in horror history. I won’t spoil it here, but it might help to know that Garland is a huge fan of the popular anime Attack on Titan.

Guillermo del Toro's Netflix anthology was full of monsters, from giant animatronic rats to alien parasites, but one of the most interesting episodes focused on a different kind of villain: consumerism. Directed by Ana Lily Amirpour, “The Outside” follows a woman, played by Kate Micucci, who becomes obsessed with a bizarre cosmetic cream called Alo Glo. Convinced that the goop will make her beautiful, Micucci slathers herself into the stuff even though it gives her a nasty rash and seems to be driving her insane.

Of course, this is a horror story, so, eventually, the goop becomes sentient, collecting itself into humanoid form and giving us one of the slimiest monsters in recent memory.

I should make a confession: I haven’t actually seen Terrifier 2, and I haven’t seen the original Terrifier either (I’m personally not a fan of puking at the movies, but that’s just me). But I’ve been a huge fan of scary clowns ever since my father showed me Poltergeist at a probably too-young age. So if a new evil clown is entering the zeitgeist, I’m here for it, even if I won’t be watching this movie until I can do so from the safety of my apartment.

Rebooting the Hellraiser franchise with a new female Pinhead was a risky move, but thanks in part to the involvement of franchise creator and horror legend Clive Barker, the new movie managed to pull it off. Played by Jamie Clayton, this new Pinhead was just as freakish and terrifying as the original — and the original even gave his stamp of approval.

While the 2022 Hellraiser has its faults (too much lore, for one thing), the arrival of a new Pinhead is something to celebrate. And hopefully, we’ll see Jamie Clayton donned in leather, peeling the skin of her unsuspecting victims again before too long.

As the breakout horror movie of 2022, there’s much to say about Barbarian. (And if you haven’t seen it, please stop reading this article now and correct that grave mistake.) But one of the undeniable highlights of the movie is the first reveal of Barbarian’s unexpected monster: a giant naked woman living in the secret tunnels under an extremely cursed Airbnb.

Known as The Mother (and played by Matthew Patrick Davis), Barbarian’s chief antagonist is equal parts killing machine and misunderstood victim. You’ll scream, laugh, and maybe even cry as her story unfolds for what may be the 102 weirdest (and best) minutes of horror in 2022.

No one expected a standout Predator movie in 2022, but that’s exactly what we got. Prey took the standard format and transported it to pre-colonial America, where a young Comanche warrior fights to survive against an alien invader with a serious technological advantage.

Prey might mark a new beginning for the franchise (the movie proves that dropping a Predator into various historical settings is a recipe for success), but it’s going to be very difficult to top the scene where the Predator takes on a giant grizzly bear. What’s next, a dinosaur? (Actually, that sounds awesome.)

There was never any doubt that Jordan Peele’s latest movie would be one of the best of 2022 (horror or otherwise), but nothing in Nope’s cryptic trailers prepared us for the monster he was about to unleash. By taking the concept of a flying saucer and reinterpreting it as a giant flying monster, Peele gave us one of the most original takes on the alien subgenre in years.

But the movie’s true brilliance is in how our understanding of Jean Jacket continues to evolve throughout the movie. From those early abstract shots, to the first reveal, to the monster’s final transformation into some sort of giant floating jellyfish, Jean Jacket is as beautiful as it is terrifying to behold.

It feels like cheating to put a skinny comedian at the top of this list, but like so many monsters tend to do, Nathan Fielder revealed the darkness within in 2022.

The Rehearsal began with a straightforward concept: give regular people the chance to practice a difficult experience they’d been putting off. But the series took a hard turn into absurdity after Fielder offered to help a woman named Angela rehearse the experience of raising a child — only to join her in the experience as the father. From there, Fielder found innovative ways to torture everyone involved. He forced Angela to relive traumatic moments from her childhood. Later, in the finale, he reckoned with the fact that he may have traumatized one of the child actors who played his and Angela’s son, Adam.

In a show full of difficult people (Angela was not a particularly sympathetic character), Nathan Fielder proved himself to be its puppetmaster and architect of pain. In the process, he made us, the viewers, complicit. If that’s not a very 2022 form of evil, I’m not sure what is.