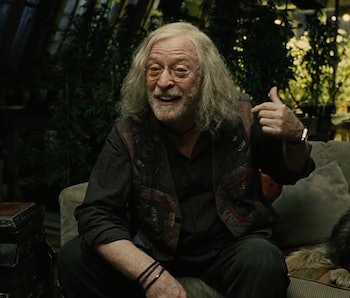 The best Christmas sci-fi movie isn’t very cheery. When thinking about holiday movies, spirited romcoms like Happiest Season and family-friendly fare probably come to mind. Children of Men, Alfonso Cuaron’s gritty, sci-fi masterpiece may not even be on the radar as a go-to Christmas movie, but it should be. Cuaron’s film rejects stereotypical holiday tropes for a bleak, steely exploration of hope, spirituality, and the migrant experience.

Children of Men is streaming now on Peacock, which has a free tier with ads and a paid tier that's ad-free.

Based on the novel by P.D. James, Children of Men is set in a dystopian future where the UK has turned into a police state to keep resources in and refugees out — or, as is often the case in the film, refugees seeking asylum are either imprisoned or killed. While humanity faces chaos, plague, and hunger, any hope for the future is obliterated due to global infertility.

However, everything changes when Theo (Clive Owen) meets Kee (Clare-Hope Ashitey), a refugee and the first woman to become pregnant in 18 years. Amid violence and political agendas, Theo vows to bring Kee to safety; the future of humanity depends on it.

Children of Men alludes to the biblical story of the virgin Mary and the birth of Jesus Christ. When Theo asks Kee who the father is, she jokes that she’s a virgin. She isn’t, but the moment (which takes place in a barn) suggests that Cuaron is very aware of the film’s spiritual and religious allegories. The film never reveals the cause of global infertility, but alludes to the rebirth and future of humanity as being in the hands of refugees and society’s most disenfranchised.

It’s a powerful commentary that offers a reset and the hope for a potentially better future. With no children being born at all, humanity gets that much closer to extinction. The birth of Kee’s daughter changes the trajectory and is influential enough to stop the cops’ assault on the refugees to gaze in wonder at the crying baby, in awe of the sound after nearly two decades without it. It’s as though they are the biblical Magi, the three kings who visited Jesus in the manger following his birth.

Cuaron's film was released in 2006, but it still feels more relevant than ever. Theo and his estranged wife (Julianne Moore), for example, lost their young son to the flu pandemic. Meanwhile, refugees are being treated like criminals by the police and the UK’s Homeland Security works as a front to further ostracize and scare immigrants. The police state, plague, and blocking of the UK’s borders all serve as a reminder that this dystopian reality is actually happening in the present day.

Filled to the brim with religious allegory and parallels to our current political climate, Children of Men is a fitting Christmas sci-fi movie that balances a grim dystopian landscape with the aspirations for the future. 14 years after its initial release, Cuaron’s film is a triumph that hasn’t lost its luster. Themes of hope, rebirth, and redemption in the wake of utter despair and societal chaos shine bright in a Christmas film that breaks tradition and is all the better for it.

Children of Men is currently streaming on Peacock.