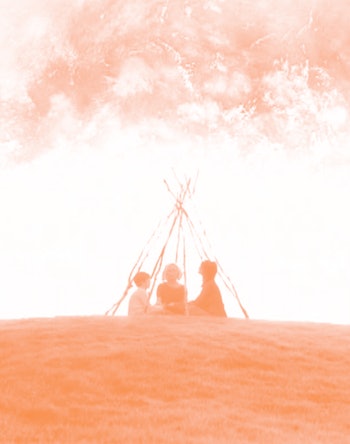 In movies, the world’s end is often represented through grandiose action sequences.

Men in uniform deliver rousing speeches beating back or even canceling the apocalypse, and special-effects spectacles ensured, perhaps accented by an Aerosmith song or two. No matter how many people die or how much destruction we see on screen, Hollywood’s all about seizing moments of badass glory from the end of days.

That's not the case with Danish director Lars von Trier's spin on the psychological disaster epic, which takes arguably the most intimate approach to apocalyptic science-fiction ever committed to celluloid.

A decade ago, the controversial director — credited with forming Denmark’s Dogme 95 movement — premiered the second entry in his "Depression Trilogy." A film that’s as much about coping with the imminent apocalypse as it is about living with depression, it explores the ways humans can misunderstand one another even in the grip of related tragedies.

The result? A terrifyingly relatable, wholly heartbreaking sci-fi drama about family and loss that hits even harder in 2021, as we emerge from a year that often felt like the end of our world. 10 years after its initial release, Melancholia is more relevant than ever.

Melancholia opens at its end, as Earth collides with the giant rogue planet that gives the film its name. In the film’s opening minutes, a series of gorgeously composed, extreme slow-motion shots foreshadow what’s to come for certain characters as the story slowly whirs to life.

The main story takes place in and around a wedding reception for Justine and her lover, Michael (Alexander Skarsgård), held at a lavish country estate. What is meant to be the happiest day in both of their lives slowly turns sour, starting with the bride and groom turning up at their own reception hours late, as their limousine was too large for the countryside roads leading up to the party.

Throughout the first half of the film, which takes place entirely at the party, Justine struggles to be happy, much to the visible anger of her sister Claire (Charlotte Gainsbourg) and Claire’s husband John (Kiefer Sutherland). Claire and John do everything from guilting Justine to getting her drunk to make her smile her way through the reception, though they cannot begin to understand why she feels how she does.

Von Trier infuses Melancholia with a surreal, dreamlike atmosphere that places the viewer in Justine's position as she gradually detaches from reality. Several shots are slowed down until they’re practically still-life portraits, while others are sped up or excised entirely, as in a scene where Justine is one moment walking away into a golf course then dancing with her father back at the party.

The director draws a parallel between the ways depression causes Justine to disassociate and the ways everyone else seems to act a little bit off — understandably, with a rogue planet about to crash down on their heads. At times, it feels like what we're seeing isn't meant to be fully real, but von Trier nonetheless ties his impressionistic images together by focusing on Justine's experience.

Halfway through Melancholia, the film’s perspective shifts to fully track the impending apocalypse and display different characters reacting to it. Von Trier doesn't reach for a hard-science focus like Christopher Nolan does in Interstellar, but he still offers some compelling and convincing dialogue about the planet headed for Earth. It’s mentioned that Internet cults have spawned around doomsayers who refuse to listen to the scientists trying to calm people's nerves. Justine, despite her deep dive into her depression earlier on, seems suddenly at ease in the face of annihilation, as Claire becomes increasingly unhinged.

Melancholia feels relevant, hard-hitting, and relatable in 2021. Von Trier has said that he was inspired to make the film after receiving treatment for depression, during which time a therapist told him a theory that depressives and melancholics handle violent situations better than "ordinary" people.

"Melancholics are ready for it,” Von Trier says he was told. “They already know everything is going to hell."

Watching this film after seeing the end of our own calamity makes me realize how differently people handled the beginning of lockdown. Some panicked about the prospect of COVID-19 never coming to an end, but everyone I know who suffers from anxiety or depression was rather calm throughout the ordeal, handling the initial wave better than anyone.

With Melancholia, von Trier made a rare sci-fi disaster film without groups of heroes putting a bomb in an asteroid. No flood of TV breaking-news updates, and not a single cabinet meeting or scene of scientists discussing the “possibilities.” Instead, the action of Melancholia is contained to a single location and a handful of characters seeing not only the world but their emotional reality, collapse. When the end finally does come, it is both harrowing and hauntingly beautiful.

Melancholia is currently streaming on Tubi.