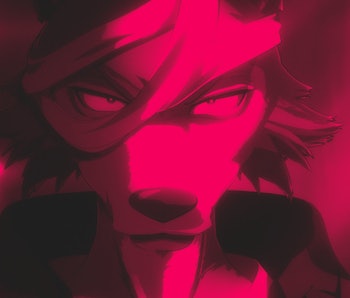 This article about Season 2 of Beastars was originally published on March 17, 2020 and updated on August 1, 2021 following the release of the season on Netflix. Read on for the original article, with some new changes to reflect the latest updates on this topic.

Here’s everything to know about Beastars Season 2.

When was Beastars Season 2 announced?

Orange confirmed via its English-language social media accounts that Beastars Season 2 was in the works as of late 2019.

When did Beastars Season 2 release on Netflix?

What is the plot of Beastars Season 2?

After a couple of failed attempts, Legoshi, our lovable, quiet wolf boy, confesses his love for the bold rabbit Haru. Overlooking the city, Legoshi tells her he will do whatever it takes to get stronger, overcome society and his own instincts to be with her. Haru, reaching to hold Legoshi’s hand before hesitating, says, “I’ll be waiting.”

Season 2 does not make things easy for the duo, as Legoshi gets mired in his thoughts after his love declaration. But the matter at hand for the characters at large is the mysterious murder of Tem. When the All-Organism Council decides whoever solves the murder will become a Beastar, all bets are off.

What were the lingering questions from Beastars Season 1?

Kiss? Yes. Go all the way? No, but they got pretty close.

After saving Haru from being eaten by the Shishigumi, the two spend a night together in a love hotel that allows mixed-species couples. Right when Legoshi and Haru are about to do the deed, Haru’s instincts as prey kick in, and she tries to enter Legoshi’s mouth, a total mood killer.

The two spend the night in the hotel and then journey back to school together.

5. Does Legoshi tell Haru he almost ate her?

Yes. In the love hotel, Legoshi and Haru assume the positions they took on that fateful night at the beginning of the season, Legoshi, crouching down, his arms around Haru, the rabbit with her back to the wolf.

Legoshi confesses that he almost ate the love of his life, only snapping out of it after hearing another voice, clawing her arm as she escapes. Surprisingly, Haru understands and proceeds to show affection to her savior.

4. What happened to Louis?

After initially backing out of saving Haru from the Shishigumi, he and Legoshi threw paws. Louis, pretty much tossing away his opportunity to become a Beastar away, actually ends up saving the wolf’s life when he stops the head of the crime family from shooting Legoshi after their fierce battle.

Louis does what Legoshi avoided doing and kills the leader, shooting him in the mouth. When some of the boss’s henchmen come in, Louis refers to himself as “Number 4” -- the name he was given when he was a part of a Black Market ring -- he then commands the lions to eat him.

We don’t technically see Louis get eaten by the Lions, so while it does look dire for the dramatic deer, there’s no way of knowing for sure.

2. Who is closest to becoming a Beastar at the end of Season 1?

Juno, another gray wolf, who is thirsty for Legoshi. At the end of the series, she pretty much takes Louis’ place as head of the drama club. She has spoken very plainly about her ambitions to become the next “Beastar” in a very dominant and sexual scene with Louis a few episodes earlier.

Sensing Haru has her rival for the wolf’s affection; she stages a grand gesture in an attempt to manipulate Legoshi to see them (not him and Haru) as the perfect couple.

1. Will we ever find out who killed Tem?

Tem’s death hangs like a cloud over the entire first season. However, we don’t find out who ate the alpaca.

A post-credits scene presumably shows Tem’s killer coming out of a bathroom (gender is not clear) and leaving a packet of blood packs in the trash. We then cut to a POV shot of this mysterious figure walking down the halls. He runs into Legoshi, who says everyone is waiting for them. This strongly suggests Tem's murderer is a member of the drama club.

Was Beastars renewed for Season 3?

Yes! In July 2021, Orange and Netflix Japan announced that Beastars would be returning for a third season in the future. A release date has not been announced.

Beastars is available to stream now on Netflix.