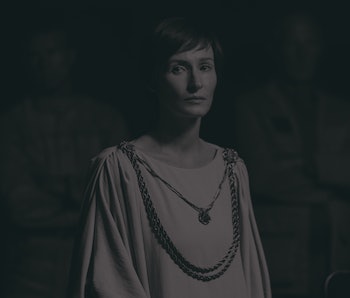 Who founded the Rebellion against the Empire? Around 2006, a deleted scene from Revenge of the Sith would have seemingly answered this question neatly and made you the ruler of your local bar trivia night. In a scene called “Seeds of Rebellion”, Mon Mothma (Genevieve O'Reilly), tells Padmé Amidala that she and Bail Organa are trying to form an “alliance in the senate” to stop Palpatine from gaining too much power.

Seems pretty clear, right? Bail Organa and Mon Mothma started the Rebellion? Except, maybe not exactly. In the latest episode of The Bad Batch — “Battle Scars” — Star Wars history gets another slight revision. It looks like a certain Clone Wars hero was also a behind-the-scenes proto-Rebel. But, the question is, what happened in between The Bad Batch and Rebels?

Warning! Spoilers ahead for The Bad Batch, Episode 7, “Battle Scars.”

“Battle Scars” mostly focuses on the Batch getting their inhibitor chips removed so they don’t turn all murder-y with latent Order 66 action. They’re helped along with this process by the sudden reappearance of Captain Rex, everyone’s favorite clone from The Clone Wars. Turns out the secret hologram person in Episode 6 was Rex — not Bail Organa or Ahsoka.

Chronologically, Rex was last seen stealing a Y-wing with Ahsoka Tano in The Clone Wars finale. In a small Easter egg, we actually glimpse this Republic-era Y-wing parked next to the Batch’s shuttle.

If you’re wondering where Ahsoka is at this point in the timeline, that question was actually answered way back in the 2016 novel Ahsoka by E.K. Johnston. After digging the graves of the other clones they fought with during the Seige of Mandalore, Rex and Ahsoka parted ways for a while.

But is Rex still in touch with Ahsoka during the events of The Bad Batch? And more importantly, is he a founding member of the Rebellion?

Rex still believes in the Republic

Toward the end of “Battle Scars,” Rex makes it clear that he and others are still fighting for the Republic, even though it doesn’t exist anymore. This is telling because the Rebellion is technically called “The Alliance to Restore the Republic.” (That’s the actual name of the organization.)

But, as demonstrated in the series Rebels, the coordination of this effort is a little scattershot, even five years before the events of A New Hope. Basically, there’s a bunch of various Rebel cells, but they don’t always cooperate with each other effectively. Eventually, the Rebellion gets its act together, but who were the early players in making that happen?

Again, conventional wisdom pushes us closer toward the big political players like Bail Organa and Mon Mothma. Bail, and later his daughter Leia, were legitimate representatives of Alderaan in the “Imperial Senate.” Ditto Mon Mothma, who was a senator from Chandrila. Even when Organa and Mothma were high-ranking remembers of the Alliance, their involvement was mostly secret up until the events of A New Hope.

In Rogue One, we learn that both Bail Organa and Mon Mothma leave the hidden Rebel base on Yavin IV because they have to keep up appearances in the senate. This means that prior to A New Hope, the Rebellion was always being run by two types of people: those totally in the shadows, and those who lived out in the open but were secretly supporting the cause.

Although the Batch doesn’t join Rex right away in his efforts (at least not in Episode 7) the show is, perhaps without meaning to, showing us the earliest formation of the Rebel Alliance. We’ve already met Saw Gerrera in Episode 1. We saw a slightly new origin story for Kanan Jarrus, and now, even Ahoska’s buddies the Martez sisters seem to be involved in anti-Empire antics.

Considering the Empire is probably only a few months old during the time of The Bad Batch, this is pretty impressive! People were already resisting even in the earliest days. This kind of activism is a far cry from Luke’s resignation about 18 years later, when he says, “It’s not like I like the Empire, I hate. There’s just nothing I can do about it right now.”

Luke’s attitude isn’t his fault per se, but it does represent a larger majority of the citizenry of the galaxy than we might think. So far, the Batch hasn’t really encountered civilians who feel strongly one way or another. And because of the nature of their work, and their need to stay off the Empire’s radar, they’re naturally bumping into other people who are anti-Empire.

All of this is great world-building and adds more texture to how the Republic became the Empire in those early days. But with the re-introduction of Rex, all of this stuff also presents a new question: What happened to Rex in between the events of The Bad Batch and Rebels?

Setting aside the controversial theory that Rex fought on Endor, we do know that Rex does become a huge part of the more formal Rebellion again in the Rebels timeframe. In the Rebels episode “The Lost Commanders” (4 BBY) Rex is hanging out with two other former clones, Wolffe and Gregor. Here’s where things get weird.

The whole point of the Rex arc in Rebels is about getting him to fight for the Rebels. In “The Lost Commanders,” Rex pushes back against Ezra Bridger’s suggestion that he formally fight for the Rebel Alliance. So what gives? In 19 BBY, in The Bad Batch, we clearly see Rex is actively helping out an early version of the Rebellion. About 15 years later, he’s off the grid and has an attitude closer to whiny ANH Luke. He doesn’t like the Empire, he hates it, but his “days as a soldier are over.”

Will The Bad Batch reconcile the apparent discrepancy? We don’t know if there are time jumps in this show, but one thing is for sure: The story of Rex is long from over. In fact, it might just be getting started.

The Bad Batch airs new episodes on Disney+ on Fridays.