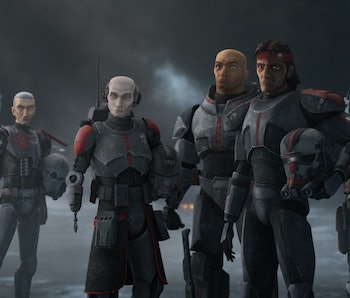 All our clone questions are finally answered. After years of wondering why the Empire switched from laboratory-made clones of bounty hunter Jango Fett to a rag-tag army of random beings with poor aim, The Bad Batch premiere revealed the reason is a lot more mundane than you may think — simple economics.

Clones are too expensive. But the Kaminoans have a plan up their sleeve, a plan that exposes the flaw of cloning but finds a way around it to something even scarier.

Spoilers ahead for The Bad Batch episode 3.

Towards the end of the third episode of The Bad Batch, Kaminoans Nala Se and Lama Su discuss Tarkin’s new fascination with an elite squad of conscripted soldiers and his plans to move away from their manufactured clones. That’s their business, and they’ll do a lot to keep their biggest customer, but there’s a problem: Jango Fett’s DNA, the “source” for every clone, is degrading.

Lama Su tells Nala Se it’s time to move onto the next phase of the plan, creating a genetically superior clone who is not only a better military asset than regular clone troopers but also better than whatever human soldiers Tarkin can find. Basically, it would be an organic superweapon.

The issue of Jango Fett’s genetic material degrading was discussed briefly in episodes of The Clone Wars, but it wasn’t pressing like it appears to be to the Kaminoans in Bad Batch. Cloning was still possible through rationing, but now it’s not a matter of supply — it’s a race against time. Not only do the Kaminoans need to secure the happiness of the Empire, but they also need a new source before their samples become useless.

This could be our first clue as to Omega’s backstory. Maybe the reason she looks so different from all the Jango clones is because she’s genetically engineered to be a whole new source for more clones. It would also explain her slow growth rate. Longer life means more time to harvest genetic material — and a longer shelf life for those cells.

Cloning has always been an inexact science. Palpatine struggled to create Force-sensitive clones for decades, resulting in many reject clones (including Rey’s own father). Even naturally occurring mutations in clones are unpredictable — mutations that gave us the Bad Batch themselves and the tragic story surrounding Tup, the clone whose inhibitor chip activated too early.

But while the process may be messy, there’s no denying the results — the Empire won the Clone Wars thanks to the Kaminoan clones (and Order 66). We know where this path leads: an all-random-dude army in only a handful of years. Still, it’ll be interesting to see what the Kaminoans are willing to do to secure their business.

The Bad Batch is now streaming on Disney+.