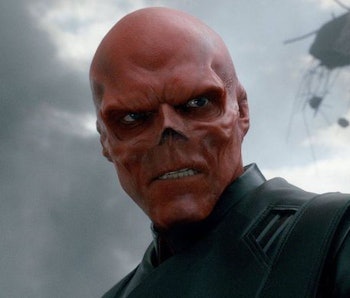 Red Skull's appearance as keeper of the Soul Stone in Avengers: Infinity War was a shocking cameo for many Marvel fans. After trying in vain to capture the Tesseract, also known as the Space Stone, he was cursed to keep watch over the cliffs of Vormir as those who seek the Soul Stone sacrifice someone they love. That's surely punishment enough, but recently released Avengers: Endgame concept art shows the early versions of the story envisioned a far more torturous fate for Red Skull.

Concept illustrator Rodney Fuentebella shared an unused illustration of Red Skull under the control of the Soul Stone to his Instagram followers over the first weekend of May. The watchman of purgatory's silhouette is shadowy, and his head licked by flame. The caption describes image as the iconic Captain America villain "with the Soul Stone controlling and splitting his soul apart."

This emaciated, ethereal being is far different than the Red Skull we saw in robes on Vormir, and drives home the profound pain of the Space Stone's curse. He's banished to live out the rest of his days watching over this stone. Even if he doesn't look as tortured as he does in the concept art, he still is living out an eternal punishment.

Why was this concept left on the cutting room floor? It may have just been a stylistic choice, but perhaps there was a need not to transform Red Skull too much, in case there was a need for him to return to the MCU. The Russo Brothers tweeted during Vudu's live tweet of Infinity War that after the Soul Stone was taken, Red Skull was free to leave Vormir. Unfortunately, Captain America's journey to return the stones in Endgame probably but him back to square one, but there's no knowing for sure.

There could have been other reasons as well, with the stone controlling him completely you don't get as much resolution to Red Skull's story. It wouldn't be him talking, it would be the stone. Keeping Red Skull sentient and not a Stone Zombie allowed audiences to see the once-mighty villain now stuck in isolation in protection of a stone that requires devastating loss. Even for a former leader of HYDRA, it's torture, and the reaction is important to show.

The concept art expresses an alternate version of Red Skull's fate that sheds new light on his banishment. Whether or not that style choice was the best choice for the movie is debatable, but one thing's for sure: it looks really cool.