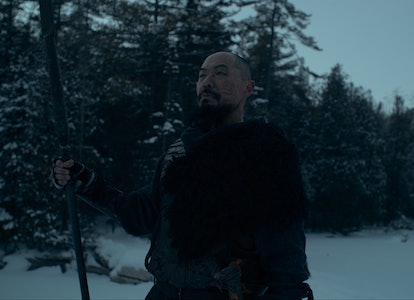 Two men cross swords in a ruined gazebo. One knows what he’s doing. The other doesn’t, and loses the bout with comical speed.

“That’s 12 heads you’ve lost today,” the master quips smoothly to his student. “I blocked you twice that time,” the student retorts. Replies the master, “We’ll tie a knot by your grave to remember that stunning achievement.”

The student is Kofun (Archie Madekwe), a sighted man in a world run by the blind. The master is Toad (Hoon Lee), a “Witchfinder” who believes sight is evil but follows a code that dictates Kofun must be protected. This is See, the Game of Thrones variant Steven Knight created for Apple TV+. The post-apocalyptic fantasy sci-fi drama is set in the future where a virus cuts Earth’s population down to a fraction and the living are left blind.

Scene Stealers is a countdown that salutes the unforgettable small-screen characters of the year. Toad is #29.

In See Season 2, Kofun’s safety is entrusted to Toad, who at first begrudges his duty but eventually comes to regard the boy with grudging fondness. In their sparring match in episode 6, “The Truth About Unicorns,” Toad has space to breathe as a character, and actor Hoon Lee seizes the opportunity with gusto.

Lee isn’t an unknown quantity: He played cross-dressing computer hacker Job in Cinemax’s Banshee and voiced Splinter and Shredder in two different Teenage Mutant Ninja Turtles cartoons on Nickelodeon. He has a place in the Marvel Universe as Lei Kung the Thunderer in Iron Fist and currently stars in HBO Max’s ass-kicking masterclass Warrior as black market salesman Wang Chao.

There’s a little cross-pollination between these roles and Toad. But See’s feral action scenes demand greater physicality from Lee, while the dialogue requires he remain unfailingly dour. Toad has many strengths. Conviviality isn’t among them.

For Lee, the differences between Toad and other characters in his repertoire are why the role is so tailored to his style. “We’re always trying to find roles, ideally, that allow us to grow and to stretch,” Lee opined on an episode of The Action Sit Rep podcast in September, “and those things can be quite subtle.”

What separates Toad from Job, Wang Chao, or Lei Kung isn’t subtle. He’s a no-nonsense soldier, a fearsome combatant, and a blind man capable of cutting enemies like he’s buttering toast. Toad stands out in Lee’s body of work, but the qualities of standing out facilitates his performance. Toad enables Lee to tread new territory. Or as he puts it, to “grow and stretch.”

The relish Lee brings to See is obvious despite Toad’s grouchiness. Toad keeps his cards close to his raggedy leather vest and communicates in bitter sardonicism. As an actor, Lee knows his way around cutting remarks, but he’s less familiar with ferocious action choreography. Toad’s reason for being is swordsmanship. The contempt he heaps on Kofun lends his martial prowess a prickly depth, but Toad’s constant criticism in “The Truth About Unicorns” belies genuine concern for Kofun’s safety. He wants Kofun to learn to fight like a (blind) man, dogma be damned. “The Truth About Unicorns” ties these characteristics together to give Toad dimension, and Lee embraces the challenge with palpable joy.

“Toad has many strengths. Conviviality isn’t one of them.”

The bad news about Toad (and if you haven’t seen the show, look away): He dies in the Season 2 finale, fighting alongside Kofun in a gloriously gory and thoroughly awesome climactic battle. There’s no spinning off from death, so any ancillary narrative about Toad would have to be a prequel, an infinitely less compelling premise than an odd couple action comedy where Toad plays Oliver Hardy to Kofun’s Stan Laurel. If only.

It’s been nearly two years since America began its dance with Covid-19, which has only further divided our society ideologically. Before he’s introduced in See, Toad lived on that division’s violently oppressive side; throughout season 2, his intolerance towards the sighted thaws to where he willingly teaches Kofun how to kill with a sword. If Toad can get over ingrained hatreds, anybody can.

More like this
Culture
8.3.2022 9:00 AM
7 amazing sci-fi shows and movies coming to HBO Max in August 2022
By Robin Bea
Entertainment
8.9.2022 1:00 PM
Has your favorite HBO Max show been canceled? The fate of 9 sci-fi series revealed
By Robin Bea
Entertainment
8.12.2022 11:00 AM
Neil Gaiman teases a Sandman prequel on Netflix. Here's what that means.
By Mónica Marie Zorrilla
Related Tags
Share: