“We’re not dealing with a flu virus here.” 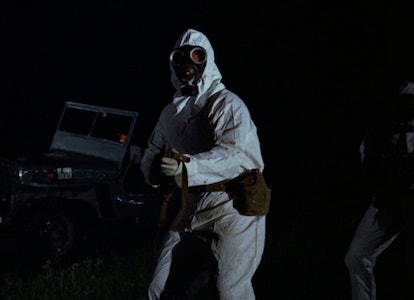 A mysterious and deadly virus is ravaging a small town in Pennsylvania, but government neglect and incompetence are the real threat.

It’s not surprising to see that kind of overtly political message in a movie by horror master George A. Romero, whose undead-horror films (starting with 1968’s seminal Night of the Living Dead) all emphasize the dangers of human nature as much as those posed by flesh-eating zombies.

Five years after Night of the Living Dead, and five years before Dawn of the Dead, Romero explored similar themes in a different context, mixing strong political commentary with suspense and horror in an underrated sci-fi thriller that’s very much worth seeking out to stream for free online.

Romero’s 1973 film The Crazies opens with a seemingly placid domestic scene, and a nod to Romero’s own biggest hit, as a young boy pretends to be a zombie in order to scare his sister. The kids are soon confronted with something much scarier, though, as their father goes on a rampage, smashing everything in his path before setting fire to the house. He’s patient zero for a new infection, brought to town via a contaminated water supply.

Soon, the military has taken over the previously sleepy town of Evans City, imposing a quarantine and rounding up local residents. Of course, the military is responsible for the contamination in the first place, after a plane containing a supposedly inactive biological weapon crashed into a nearby river.

Miscommunication and bureaucratic inefficiency allow the virus to spread, before anyone who knows how to handle it is even aware. The first military commander on the scene is Major Ryder (Harry Spillman), a mid-level functionary who’s sent to monitor what he thinks is a simple plane crash and winds up in the middle of a raging outbreak. Ryder is the kind of put-upon underling who’s annoyed that he’s been called in on his day off, and Spillman conveys this resentment every time he lights up a cigarette or chomps on a sandwich.

Even the authorities brought in to assist Ryder are chosen more or less at random, based on who’s available. “Do you realize the blunder that’s been made?” bellows Dr. Watts (Richard France), one of the scientists who worked on the virus project, code-named Trixie. Watts is furious at the haphazard response to the Trixie leak, but his pleas fall on increasingly deaf ears, culminating in a tragic misstep in the third act.

This is not a sci-fi movie about intrepid scientists banding together to solve an impossible problem. Romero is more interested in how the military treats American citizens as collateral damage; as such, The Crazies is full of explicit references to civil unrest and the ongoing war in Vietnam.

The closest thing the movie has to a main character is David (Will McMillan), a Vietnam veteran and local volunteer firefighter. David teams up with fellow veteran and firefighter Clank (Harold Wayne Jones) to form what passes for a resistance force, in the same guerilla formation as the people they fought against in Vietnam. When a fellow resident speculates that the military might just be there to help, David offers a reminder that the same military has turned student protests into massacres.

David’s main concern is protecting his pregnant wife Judy (Lane Carroll), a nurse who receives one of the few doses of a potential serum meant to inoculate people against the virus. There aren’t enough doses of the serum even to distribute to all the soldiers, let alone the civilians, and the hierarchy of who gets access to protection from the virus is just one element of The Crazies that has taken on disturbing new resonance with the world’s current pandemic.

Watts talks about people as “vectors” for the virus, noting that even one person getting past the quarantine perimeter could mean the virus spreading across the country. And when military commanders suggest just letting the virus run its course in town, Watts shoots down that idea by asserting, “We’re not dealing with a flu virus here.”

Trixie isn’t a respiratory virus, either. As the title indicates, and as the opening scene foreshadows, the infected become disoriented and often violent. The local high school is eventually filled with a crazed mob that doesn’t look all that different than one of Romero’s zombie hordes. “It leaves its victims either dead or incurably mad,” Watts explains of the virus — and that’s only if the military doesn’t shoot them first.

The biggest body count in The Crazies comes not from Trixie but from the soldiers, clad in white hazmat suits and gas masks, who show little hesitation before gunning down residents who resist their advance. These rural Pennsylvania residents are remarkably well-armed, though, and David and his crew aren’t the only people who fight back. “We’re only doing what we have to do to ensure survival,” says reluctant military leader Colonel Peckem (Lloyd Hollar), who gives the order to shoot anyone who appears infected or shows signs of resisting.

Whose survival is Col. Peckem ensuring, exactly? Not that of the local residents, and not that of his own men, who end up infected despite their protective gear. Really, Peckem is protecting the bureaucrats back in Washington, who calmly discuss nuking the entire town if the quarantine doesn’t hold, and who debate the proper cover story to feed to the press. Romero knows that the real crazies aren’t the hapless victims of this virus, but the callous political leaders all too eager to sacrifice everyday people to suit their agendas.

The Crazies is streaming for free on Tubi and Vudu in the U.S.