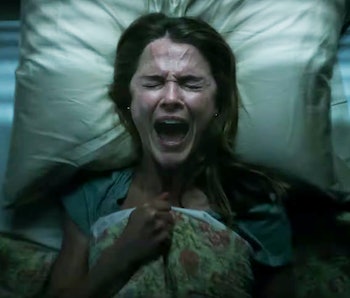 What happens when a teacher gives a lesson on myth and legend, only for one of those myths to be all too real for one of her students? That's the core of Antlers, the new movie produced by horror legend and Academy Award-winning director Guillermo del Toro. With the movie's April release date closing in, here's everything we know about the terrifying tale.

When is the Antlers release date?

The film is slated to open April 17, after being in development since 2018. It's produced by Searchlight productions, formerly known as Fox Searchlight Productions. (After Fox was bought by Disney, they eliminated the name from the company.)

The Pacific Rim creator is only on board as a producer. Scott Cooper, director of 2009's Wild Heart, for which star Jeff Bridges won the Oscar, will helm the movie in his debut foray in the genre.

What's the plot of Antlers?

Though it appears to be a totally original story, it's been adapted from Nick Antosca's short story entitled "The Quiet Boy." Antosca adapted it for the screen along with three other writers, including director Scott Cooper. Though the story seems to have evolved since being published in the online magazine Guernica, those looking for spoilers will be thrilled to know the story is available to read online.

Antlers centers on Julia, a young elementary school teacher who takes a special interest in one of her pupils, Lucas, after he writes a particularly disturbing story for an assignment. She discovers he's keeping a supernatural creature in his home, and unraveling the mystery will require a deep-dive into local legends.

In the first teaser, Lucas reads an excerpt from his story that hints at the kind of monsters we can expect from Antlers:

"Once, there were three bears that lived in a dark and wet cave above a small town. Every day, Little Bear went to school, and at night he would come home and eat dinner. But one day, the little bear came home, and Big Bear and Baby Bear were different. Big Bear got sick and his insides turned black. Big Bear has become more angrier and meaner, because they had no food, no meat. But they had each other."

Everything's creepier when read in a child's voice, but this is on another level.

Who's in the Antlers cast?

In her first role since The Rise of Skywalker, Keri Russell stars as Julia, with Black Mirror alum Jesse Plemons as her policeman brother Paul. Plemons has appeared in several Netflix ventures, including The Irishman and El Camino: A Breaking Bad Story. Lucas is played by Jeremy T. Thomas, who's no stranger to the horror genre. He appeared in Amazon Prime's anthology series, Lore.

Is there a trailer for Antlers?

Yes! The final trailer has already racked up more than a million views on YouTube. Check it out here:

More like this
Entertainment
5.13.2022 1:30 PM
Christina Ricci says Yellowjackets fans will love her monstrous new thriller
By Dais Johnston
Entertainment
5.10.2022 11:15 AM
5 years ago, Happy Death Day did one revolutionary thing no time-travel movie had done before
By Will Ashton
Science
5.6.2022 11:30 AM
The best sci-fi thriller on Netflix reveals a provocative spin on time travel
By Tara Yarlagadda
Related Tags
Share: