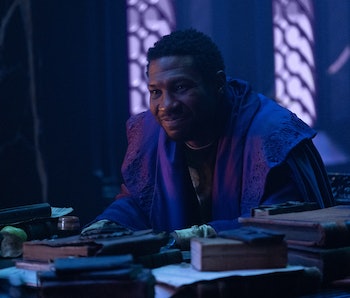 It’s been nearly a year since the Loki Season 1 finale premiered on Disney+, but the episode’s introduction of Kang the Conqueror (Jonathan Majors) is still very much on the minds of Marvel fans. While none of the MCU titles that have come after Loki have followed through on the promise of Kang’s debut, there’s hope that will start to change next year when Ant-Man and the Wasp: Quantumania is released.

The Ant-Man sequel is set to feature Kang as its central villain, which has led fans to believe that it will be the project that actually kicks off the MCU’s Kang arc. However, it looks like Marvel fans may want to start preparing themselves for the possibility that the Kang they meet in Quantumania won’t necessarily be the most important or villainous version of the character.

The Leak — In a recent Twitter exchange, Marvel insider DanielRPK was asked why Kang was chosen to be the main villain of Quantumania if he’s also going to be the MCU’s new Thanos-level villain. The Marvel insider responded by saying that “different variants of Kang” will appear in “multiple MCU projects” in the coming years, and even went so far as to say that Kang’s multiple variants are “the point” of his story in the MCU.

In other words, fans shouldn’t necessarily go into Ant-Man and the Wasp: Quantumania expecting its version of Kang to be one at the center of whatever multiversal arc Marvel is developing for the character. That doesn’t mean he won’t be a powerful antagonist in the film, but it does mean that he may not be the version of Kang who ultimately poses the biggest threat to the MCU.

Kang’s Multiversal War — In the Loki Season 1 finale, the Kang variant known as He Who Remains explains that he created the TVA in response to a multiversal war that nearly destroyed everything in existence. That multiversal war was apparently started by variants of himself from across the multiverse, many of whom sought to achieve complete multiversal domination.

He Who Remains then warned that his death would only open the door for his own variants to start yet another war. As most comic book readers already know, Kang is a character who has multiple variants in the comics, so it makes sense that there’d be multiple versions of him in the MCU too. However, most Marvel fans still seem to be operating under the assumption that there will be one, prime version of Kang in the MCU who will lead the character’s inevitable story.

With that in mind, most Marvel fans have predicted that Ant-Man and the Wasp: Quantumania will be the film that will introduce them to said version of Kang. This alleged leak, however, reveals that might not be the case. In fact, it suggests that Marvel fans need to reset their expectations for how the MCU’s Kang storyline will actually play out.

The Inverse Analysis — If this leak is correct, it means Phase 4 of the MCU, as well as the ones that follow it, may unfold very differently than the universe’s first three did. Kang likely won’t be the kind of singular antagonist in the MCU that Thanos was. Instead, it seems more likely that Jonathan Majors will appear as different versions of the character moving forward.

Kang’s story may, therefore, see Earth’s Mightiest Heroes come together to stop not just one version of Kang, but every variant of him that exists throughout the multiverse. That would certainly be a different and bigger story than the one Marvel told with Thanos.

Ant-Man and the Wasp: Quantumania is set to hit theaters on February 17, 2023.