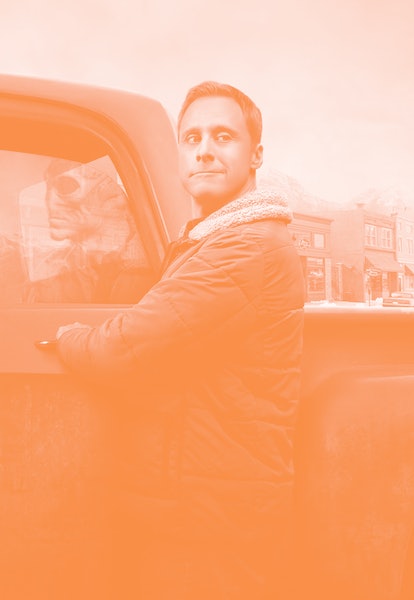 Alan Tudyk is no stranger to science fiction.

The actor has a long history of playing around in the genre, from his breakout role as Hoban "Wash" Washburne in Firefly to his recent villainous turn as Mr. Nobody in DC's Doom Patrol. But for the first time in his career, Tudyk’s latest sci-fi performance has him in the starring role as the titular Resident Alien in Syfy’s kooky new alien invasion series.

The basic gist is as follows: An extra-terrestrial on a mission to obliterate Earth ends up crash-landing on the very planet he hates. Trapped in a small town called Patience, Colorado, the alien attempts to blend in. He takes the form of a human male, one Dr. Harry Vanderspeigle, and works tirelessly to find the remains of his ship to complete the mission. Things get complicated when the town sheriff calls on him to assist in a murder investigation. Needless to say, this is not ideal for Harry.

"I just want to kill everyone," Alan Tudyk tells Inverse, "and I'm just terrible. I'm terrible at pretending to be a human — the thing I want to destroy."

This is who Harry is: A highly-intelligent alien who suddenly finds himself in the body of a human. In order to keep his cover intact, he must immerse himself in a community full of the very thing he despises, humans. It’s a winning concept, and Tudyk’s ability to blend sci-fi and comedy makes him the perfect man for the job.

Tudyk has been doing this for a while, and he compares his new role to one other in particular, the wry re-programmed Imperial security droid K-2SO in Rogue One: A Star Wars Story. To drive home the point, the actor recalls a quote from the movie that was cut from the film:

“There used to be a line when he first meets Jyn Erso (Felicity Jones) where he says, ‘No one likes you. Whenever everyone talks about you, and then when you come in the room, they stop. When you leave, they start talking about you again.’”

That line might not be in the final cut of Rogue One, but its spirit lives on in Tudyk's latest and (arguably) greatest role so far.

Inverse spoke with Alan Tudyk about the genre influences featured in the show, his knack for cursing on set (especially around the child actors), and the unlikely similarities that exist between petulant children, Harry Vanderspeigle, and K-2SO — the droid he played in Rogue One: A Star Wars Story.

First off, this is your first lead role on a TV show. So, congratulations on finally being on top of the call sheet.

Thank you, thank you.

And boy what a difficult show to categorize. It feels like a variety of genre influences were tossed in a blender and out came Resident Alien. You've got bits of They Live, Mork and Mindy, Law & Order, and maybe even some Monk.

It's an hour-long comic drama? Wait, a comedy-drama? Nope, that still says comedy. A dramedy. That's it!

Chris Sheridan, who wrote it, worked on Family Guy for so long. Those influences peek out here and there. He does a good job of creating a whole world where these characters are sympathetic and interesting and have real emotional issues.

Oh, and I love your reference to Monk. I see a Monk thing as well. I'm a big fan of Monk. So I appreciate that.

You are absolutely welcome. And then, on top of that, it's hard to categorize Harry. One second, your character comes off as this methodical, calm, sinister foe. But then, at any minute, things can pivot and turn him into a bumbling oaf. Were there challenges for you to get that balance right?

I just want to kill everyone and I'm just terrible. I'm terrible at pretending to be a human — the thing I want to destroy. I didn't plan to be on Earth; I didn't plan on interacting with any humans. So, I don't know anything about them when I accidentally crash land. That's where so much of the humor comes from: the trying to learn how to make the body work, and how to speak, and how to make the mouth make sounds or even kiss.

Harry, in a way, is interacting with the world as a child would. He's discovering his body and figuring out how he fits into the world. That's pretty fitting considering that his number one nemesis is a nine-year-old boy named Max, played by Judah Prehn. Out of everyone in town, he's the only one who can see Harry's true alien form. Some of the best scenes come out of these interactions.

I love Judah. He's fantastic. He knows his lines and he knows what he's doing. He's on it. Gracelynn [Awad Rinke] is another young actor who's with him. They end up teaming up basically, against me. She plays a character named Sahar, and she's just whip-smart. I mean, in real life, they've kind of got me outmatched.

They must've kept you on your toes on set.

It's funny to have that kind of adversarial relationship on set. I cuss a lot, accidentally. I don't know why. I ended up paying [Judah] so much money, to the cuss jar. At the very beginning, I was like, I need a real incentive to not curse around you. So it was five dollars every time I said a curse word. And man, he's on it.

Another element that adds this quirky energy to the mix is the way the series blends your on-camera comedic chops with your voice-over talents. Your narration adds a whole other layer to things, giving the audience an inside perspective into Harry's mind. Sometimes using this type of narration can come off as a gimmick but here, this component adds just the right amount of oddness to the mix.

It's great because It gives you an added opportunity to tell the story. It's storytelling, and it's being the narrator but it's also great to be able to set yourself up for a fall. And then, whenever you have a narration, if something needs to be clearer when you go back and do the narration after it's all shot, you can tighten things up and make certain things are clearer. It gives you an opportunity to put the finishing touches on it.

You've built up an impressive repertoire filled with memorable characters like Tucker in Tucker and Dale vs. Evil, droid K-2SO in Rogue One: A Star Wars Story, and the dastardly DC villain Mr. Nobody on Doom Patrol comes to mind. These characters exist on the fringes of society and seem to lack a sense of basic etiquette, or understanding, of public decorum and simple human interaction. And now you've got Dr. Harry Vanderspeigle and it feels like each role you've taken led us to this character. Are these traits something that you're drawn to?

Definitely, there are similarities. I hadn't put Mr. Nobody in there. That guy, he's so evil, and he's so powerful. But K-2SO in Rogue One definitely has that same way of speaking to people. There used to be a line when he first meets Jyn Erso (Felicity Jones) where he says, "No one likes you. Whenever everyone talks about you, and then when you come in the room, they stop. When you leave, they start talking about you again."

It was in an early cut of the movie and that seems like something that Harry would say. "No one likes you. And then they talk about you when you're not around." He's like a petulant little kid. I am drawn to that. There's a lot of humor there. It's really fun.

Resident Alien premieres on January 27 at 10 pm Eastern on SYFY.