“The invasion is coming” 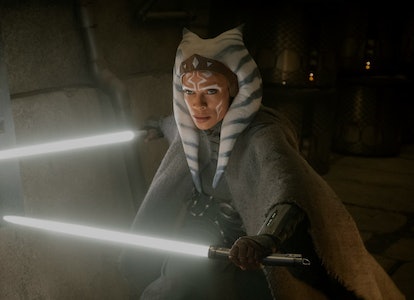 Ahsoka Tano’s appearance in the live-action Star Wars universe has been guided by one thing: Grand Admiral Thrawn. Thrawn, a major villain of Star Wars Rebels, was last seen with young Jedi Ezra Bridger. Ahsoka has sworn to find him and to confront Thrawn — it was even included in her first lines in The Mandalorian, when she fights the Magistrate.

But, now, new information about her Ahsoka spinoff suggests the threat is much bigger than Thrawn. In fact, it could be bigger than anything we’ve seen in the live-action universe so far.

On the official D23 website, a recap of the Lucasfilm and Marvel showcase mainly includes all of the announcements that rocked the fandoms over the weekend. But, buried in the summation of all the Ahsoka news, is a one-sentence plot synopsis that we haven’t seen anywhere else.

Set after the fall of the Empire, Ahsoka follows the former Jedi knight Ahsoka Tano as she investigates an emerging threat to a vulnerable galaxy.

It seems innocuous at first, and in keeping with the assumption the series will follow Ahsoka in the hunt for Ezra and Thrawn. But, on closer inspection, why would the synopsis mention an “emerging” threat? Thrawn already emerged in Rebels, and that’s without taking into account his many appearances in novels both in and out of canon.

Within those novels, we find a more likely threat that could certainly be “emerging” around the time the Empire falls. In the latest Thrawn books, we see the Chiss Ascendancy (Thrawn’s species) locked in a brutal war with the Grysks, a cunning alien species that managed to turn the Chiss against themselves.

If they actually triumph in that war, they’d next look to the galaxy as a whole. In order to find her old friend and old enemy, it may be necessary for Ahsoka to single-handedly keep an invasion at bay in the process.

Grysks would be an interesting addition to Ahsoka. They’re a devious and villainous threat that wield more than just brute force. They’re a kind of threat that begs a more strategic approach — an approach that comes naturally to the Jedi and the Chiss alike. Who knows? We may even see an uneasy alliance between Thrawn and Ahsoka. (The Empire has fallen, so Thrawn’s loyalties may lie with his people more than his affiliation.)

Granted, we’re speculating off of one word in a plot description, but this could be the wake-up call fans need to look beyond just Thrawn as a potential enemy in Ahsoka. The universe is unending, as is the list of people who could have beef with Ahsoka.