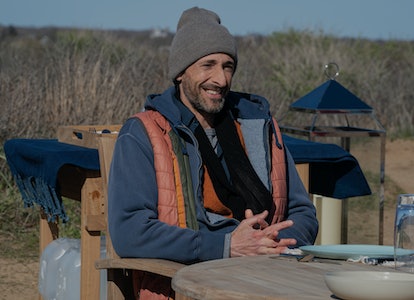 The Roys are used to lavish hospitality. And while it might not be an affair decorated with pomp and majesty, it doesn’t get much better than a professionally-cooked meal on an idyllic, privately-owned beach. In normal circumstances, this would be true. But not here.

This is a honey trap for the sweat-soaked Logan (Brian Cox) and meekly valiant Kendall (Jeremy Strong), a father and son at all-out war, ensnared here by the common goal to win over one man. For once, they do not hold the cards; their balls are held, novelly, in another’s grasp.

SCENE STEALERS is a countdown that salutes the unforgettable small-screen characters of the year. Josh Aaronson is #9.

The hands that hold said testicles — metaphorically speaking, of course — belong to the gilet-wearing, beanie-adorned new money tech bro Josh Aaronson, played by series guest star Adrien Brody. In the fourth episode of Succession Season 3, Josh Aaronson has summoned the battling Roy men from behind their individual trenches into something of a No Man’s Land, where only he is the sole holder of arms.

Who is Josh Aaronson?

Both Roys need him to stay invested in Waystar Royco, despite the infighting and outside conflict with Kendall’s ex-friend Stewy (Adrian Moayed) and perennial Waystar rival Sandy (Hope Davis). Without his four percent share in the company backing a Roy family premiership, they are doomed to failure. And Josh Aaronson luxuriates in the raw gift of power.

Brody has been very comfortable, historically, with embodying snideness. Think back to Wes Anderson’s The Grand Budapest Hotel, in which his villainous Dmitri Desgoffe und Taxis (yep, it’s a Wes Anderson film) is painted with a perpetual, condescending scorn. In Midnight in Paris, portraying the long-dead Surrealist Salvador Dalí, he emanates sleek, snooty pretense.

Aaronson isn’t all of these traits rolled into one — even if he is quietly condescending, and pretentious enough to live in a multi-multi-million dollar concrete mansion — but Brody does boast one unifying quality: clever, under-the-radar coerciveness. “[He’s] an amalgamation of a number of people I’ve encountered,” Brody told Variety, “A personality that I’ve felt is both disarming and dangerous.” It’s a testament to Brody’s A-list bona fides that he does so much with so little screen time. But then again, that’s one of the benefits for a show like Succession in building prestige cache: blockbuster cameos. (See also: Alexander Skarsgård.)

Both disarming and dangerous, Aaronson most certainly is. Who else wields the strength of character (and, fundamentally, the sheer confidence) to beckon Logan Roy, the man who names the President of the United States, to a private island on his hands and knees?

If Aaronson was to have his own show, it would have to play into that quiet, lingering danger. A high-class dealmaker coiled like a snake, ruthless and yet entirely affable. Perhaps we’d see the world of Succession through his eyes, crucially external to the Roys. He is, after all, one of the few members of the board we’ve had a full-bodied look at so far. If he’s this perceptive of the Roys, the most powerful business moguls in the entire world, how effective must he be in board rooms with comparable minnows? “Everything is being assessed and dissected,” Brody says of the aforementioned scene, and this shrewdness most certainly makes for a starring quality, even if the scope of conflict wouldn’t be quite as big as the Jacobean theatre of the core show.

Aaronson is, fundamentally, a product of the individualistic traits and impulses similarly seen — variously celebrated and denigrated — across the wider Succession ensemble. Like everybody else in the money-grabbing world in which Waystar Royco sits its throne unopposed, Josh Aaronson serves to spell out the immorality of the hyper-rich: those with gargantuan, poorly-designed mansions on distant islands, who trick their equally rich friends and colleagues into nefarious beachside teas. All for the chance at another buck. In a world currently dominated by narratives around worker exploitation and the ever-widening gap between the rich and poor, Aaronson reminds us of the shrewdness, and more fittingly, moral vacancy, required of the 0.001%.