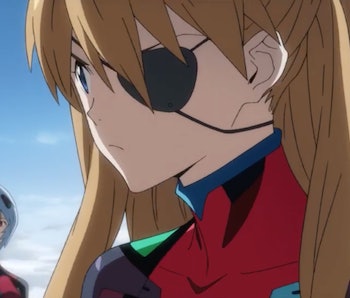 This article about the film Evangelion: 3.0+1.0 Thrice Upon a Time was originally published on December 28, 2019 and updated on July 3, 2021 following the movie's release. Read on for the original article, with some new changes to reflect the latest updates on this topic.

2019 was a banner year for fans of Hideaki Anno’s iconic mid-90s anime series, Neon Genesis Evangelion. After being without a U.S. distributor for years, the show’s full 24-episode run and the iconic End of Evangelion OVA came to Netflix over the summer, to the nostalgic delight of OG weebs nationwide. And after eight long years in production, the fourth Rebuild of Evangelion reboot movie finally released in 2021.

Here’s everything we know about the hotly-anticipated film Evangelion 3.0 + 1.0.

Initially, it was announced Evangelion 3.0 + 1.0 would come to theaters in Japan on June 27, 2020. However, the film had to get pushed back multiple times due to the coronavirus pandemic. The final release date of March 8, 2021 was finally confirmed earlier that year.

Internationally, the film is planning to release on Amazon Prime Video on August 13, 2021. It will be screening the updated release of the movie, which features a new cut that adds bonus scenes. The new version is titled Evangelion: 3.0+1.01 Thrice Upon a Time.

Yes! Here’s the trailer for 3.0+1.0, which released shortly before film came out in Japan.

Then there’s the trailer for the updated 3.0+1.01 release, which Amazon dropped in the beginning of July 2021. You can watch that below.

How are the Rebuild movies different from the original Neon Genesis Evangelion anime?

The Rebuild movie series is a retelling of the original 24-episode anime, with enhanced visuals and significant tweaks to the storyline. There are new scenes, settings and characters in Rebuild that were not included in Neon Genesis Evangelion. While Shinji, Rei and Asuka are still the primary focus of the story, the teen mecha pilots are joined by Mari Makinami Illustrious, who’s the skillful, pink-clad pilot of Unit 08.

Shinji is able to halt the full destructive potential of the apocalyptic Third Impact in the earlier versions of the story. Evangelion 3.0 moves the action some 14 years into the future, and sees him directly cause both Third and Fourth impact. Whoops.

As the conclusion of the four-movie arc, 3.0 + 1.0 features an entirely different ending from either Neon Genesis Evangelion or End of Evangelion.

We get a first glimpse at the plot when the opening ten minutes of the film were screened at an event in Paris in summer 2019. Coincidentally, that’s where the action begins, as Mari, Ritsuko and Maya search for some defense technology in the city’s ruins, only to be attacked by a group of never-before-seen, four-footed Evas.

Meanwhile, Shinji, Asuka, and Rei despondently wander the outskirts of Tokyo-3 after the events of the last film. The former two begin to grow closer together and realize their feelings. But they have to turn their focus to the matter at hand: Unit-13 has been restarted, leading to one final showdown between Shinji and Gendo.

More like this
Entertainment
Jan. 19, 2023
Netflix's next big sci-fi franchise finally has a release date
By Eric Francisco
Entertainment
Jan. 18, 2023
M3GAN 2.0 confirmed: Everything we know about the killer doll sequel
By Mónica Marie Zorrilla
Entertainment
Jan. 25, 2023
Polite Society breaks the mold for the coming-of-age movie
By Andy Crump
LEARN SOMETHING NEW EVERY DAY.