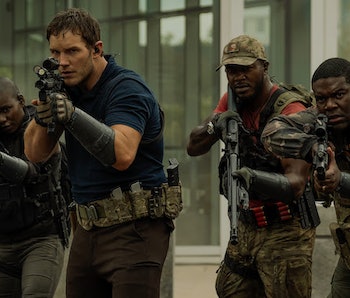 Starlord is facing a different type of alien. Chris Pratt is taking a break from the MCU following Avengers: Endgame so he can mix it up with some new projects. On the horizon for Pratt is a new Pixar movie, Onward, and The Tomorrow War. Pratt has posted sneak peeks from set which suggest this is a movie sci-fi fans will want to keep on their radar.

Here’s what we know so far about Chris Pratt’s next big movie.

When will The Tomorrow War be released?

The Tomorrow War was initially scheduled to hit theaters on December 25, 2020. However, due to the COVID-19 pandemic, it was pulled from the schedule by Paramount. While in release limbo, Amazon Studios acquired rights to the film. In April, it was announced that The Tomorrow War will release digitally on Prime Video on July 2, 2021.

Is there a trailer for The Tomorrow War?

Not yet! Considering the amount of times the release date (and studio) has changed for The Tomorrow War, a trailer for the film may not be seen until closer to its release in summer 2021.

Who is directing The Tomorrow War?

Chris McKay will direct, and previously worked with Pratt on The Lego Movie. McKay’s past work has mostly been comedy, including The Lego Batman Movie, Robot Chicken: Star Wars III, and Moral Orel. It seems like McKay is slowly expanding his wheelhouse, though, because after The Tomorrow War, he’s attached to Nightwing movie and a Johnny Quest movie, both of which in the early stages of production.

Who is starring in The Tomorrow War alongside Chris Pratt?

As of December 2019, the cast and crew were filming in Iceland. Pratt shared a look at some of the scenery with his Instagram followers. In the video, we not only get a glimpse of the snowy exterior but Simmons and McKay, too.

What is the plot of The Tomorrow War?

The specifics of The Tomorrow War plot remain a mystery, but we do have a basic idea of what to expect. The Tomorrow War tells the story of a husband and father (Chris Pratt) drafted into a war against invading aliens. It seems like this man will bring a unique skillset to the table involving the past.

In August, Deadline said the plot of The Tomorrow War is about “a husband and father who is drafted to fight a future war in which the fate of humanity may rely on his ability to correct issues of the past.” Meanwhile, on the movie’s IMDb page, the plot is listed as: “A man is drafted to fight in a future war where the fate of humanity relies on his ability to confront his past.”

It seems like Pratt’s character will have issues he must work through, or he might be literally going into the past to fix certain events. It might even be mix of the two.

In December, Pratt shared a look at the concept art for The Tomorrow War, including clothing, aircraft, and most likely key shots. It doesn’t seem to be too spoilery, so take a look below.

Is The Tomorrow War based on anything?

As far as I can tell, The Tomorrow War is a completely original idea based on nothing but the screenwriter’s imagination. That screenwriter would be Zach Dean, who is also responsible for writing Deadfall, starring Eric Bana and 24 Hours to Live, starring Ethan Hawke.

Why is it called The Tomorrow War?

Glad you asked; there’s an interesting story to that part. So, originally, The Tomorrow War was titled “Ghost Draft.” In a November Instagram post, Pratt acknowledged that title “Ghost Draft” was “problematic.”

He chose to have some fun with revealing the new title in the same post, throwing out joke names like “World War A.” In the end, “The Tomorrow War” won out.

The Tomorrow War will be released on July 2, 2021 on Prime Video.