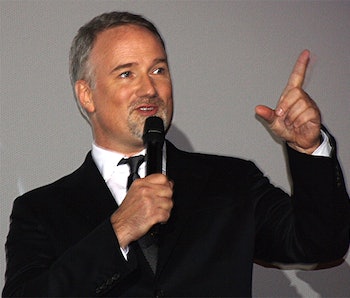 It’s time for another trip to Chinatown. Visionary director and Mindhunter showrunner David Fincher’s relationship with Netflix is about to get even closer, judging from the recent announcement of a hugely unexpected upcoming project. The director will helm a new series for the streaming service that will serve as a prequel to Roman Polanski’s legendary 1974 detective film Chinatown, which starred Jack Nicholson and Faye Dunaway. It garnered eleven Oscar nominations and has since gone down as one of the greatest films ever made. Here’s what we know about Fincher’s prequel series.

Who are the cast and crew of the Netflix Chinatown prequel?

Fincher, who you likely know best as the legendary director of films like Fight Club and The Social Network, will write the series alongside the original film’s writer Robert Towne, who won the Oscar for Best Original Screenplay for the film. Towne also returned for 1990’s The Two Jakes, a sequel which saw Jack Nicholson return to the screen as Detective Jake “J.J” Gittes. While that film didn’t make quite as big of a splash as Chinatown, it certainly doesn’t take away from his prior accomplishments.

Netflix has yet to make any official casting announcements. However, it feels safe to say that Nicholson won’t be returning, partially due to his lengthy hiatus from screen acting and partially because he’s a bit too old to pop up in a prequel series for a character he played 40 years ago. Whoever is tapped for the lead role has big shoes to fill, though. Nicholson is one of the most accomplished screen actors of all time, with the role of Jake Gittes among his most notable performances.

What’s the Netflix Chinatown prequel about?

While the series is being marketed as a prequel, the original film’s story is relatively self-contained. According to Variety, the series will focus on Jake’s early days as a private investigator in Los Angeles. Elements of those cases may cross over with the eventual plot of Chinatown, but for now, it would seem the series will more or less stand on its own.

We’ll keep you in the loop on the progress of the Chinatown prequel series as the news comes. It’s still very much in its infancy, but this is for sure a series to keep an eye out for on Netflix. Fincher’s work on Mindhunter is among the best the network has produced, and it feels safe to say that this series will be no different.

When will the Chinatown series arrive on Netflix?

As of March 2021, the Chinatown prequel is still in its infancy. Fincher has said that he and Towne are still trying to break the story. The director has been keeping busy the past couple of years, including the Oscar-nominated Mank and a modern take on Alfred Hitchcock’s Strangers on a Train.