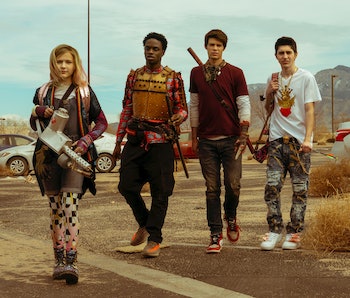 This article about Season 2 of the streaming series Daybreak was originally published on November 18, 2019, and updated on June 20, 2021 following the cancellation of the series. Read on for the original article, with some new changes to reflect the latest updates on this topic.

Netflix had a hit on its hands in the form of Daybreak, which premiered just before Halloween 2019. The show melded the worlds of The Breakfast Club and Mad Max, a post-apocalyptic high-school dramedy. It was met with instant critical acclaim and had viewers eagerly anticipating the announcement of a second season. Unfortunately, that good news never came. Here’s everything we know about the series’ cancellation.

Was Daybreak renewed by Netflix?

Unfortunately not. Only a couple of months after Season 1 aired, in December 2019, Netflix announced that Daybreak would not be returning for a second season. Co-creator Aron Coleite announced the news in a tweet.

“We learned last week that Daybreak will not be returning for a second season,” he wrote. “We’re so sorry we couldn’t share it with you sooner but also grateful that we got to hang out in these last few live-tweet sessions with all of you. Thank you for picking up what we put down, for running with it in all of your amazing, weird, monstrous ways and for being such an important part of this show and our experience making it.”

“No one is as heartbroken as we are that we can’t share more of this ride with you,” he continued. “But we’re so grateful to have gotten to bring it this far.”

What happened in Season 1 of Daybreak?

Daybreak takes place in a post-apocalyptic setting that melds a myriad of archetypes from various sorts of genre fiction. It’s got Mad Max-esque gangs, ronin, and cliques reminiscent of those seen in classic high school films like Mean Girls. In the world of Daybreak, teenage survivors roam the Los Angeles landscape and vie for control in cliques that largely resemble those of everyday high school life, including the Cheermazons and the Jocks.

Our protagonist is Josh, a lone wolf searching for his missing girlfriend, Sam. He’s soon joined by Angelica Green, a 10-year-old punk-rock genius and pyromaniac, and Austin Crute (Booksmart) as Wesley Fists, a ronin-esque figure searching for redemption.

The cast unites against the show’s villain, played Ferris Bueller himself, Matthew Broderick. Broderick plays a former high school principal who has stylized himself as the villainous Baron Triumph.

Most of the show’s first season revolves around Josh’s search for Sam and the gradual coming together of his crew. It also explores the feuds between the various gangs of survivors as they wage war against one another over territory and social strata.

The season comes to a head as the survivors face off against Broderick’s Baron Triumph. Though they claim victory in the season finale, there’s still a rough road ahead. When Josh finally presents Sam with the opportunity to reconcile and ride off into the sunset together, she refuses, instead staking her claim as the community's new leader. Jocks and Cheermazons alike kneel before their new queen.

What could have happened in Daybreak Season 2?

Season 2 would have likely focused on the new social dynamics that resulted from Sam taking the throne. There was a sinister air to her ascent in the finale, and it feels safe to say her rule wouldn’t exactly have been good and just.

In terms of character, though, the season would have needed to focus on Josh coming to grips with the fact that his notions of who Sam is are antiquated and somewhat sexist — he only ever saw her, by her own words, as a damsel to be rescued and not her own person. If Josh is going to continue to survive the apocalypse, he’d need to learn better — and fast.

Daybreak is currently streaming on Netflix.