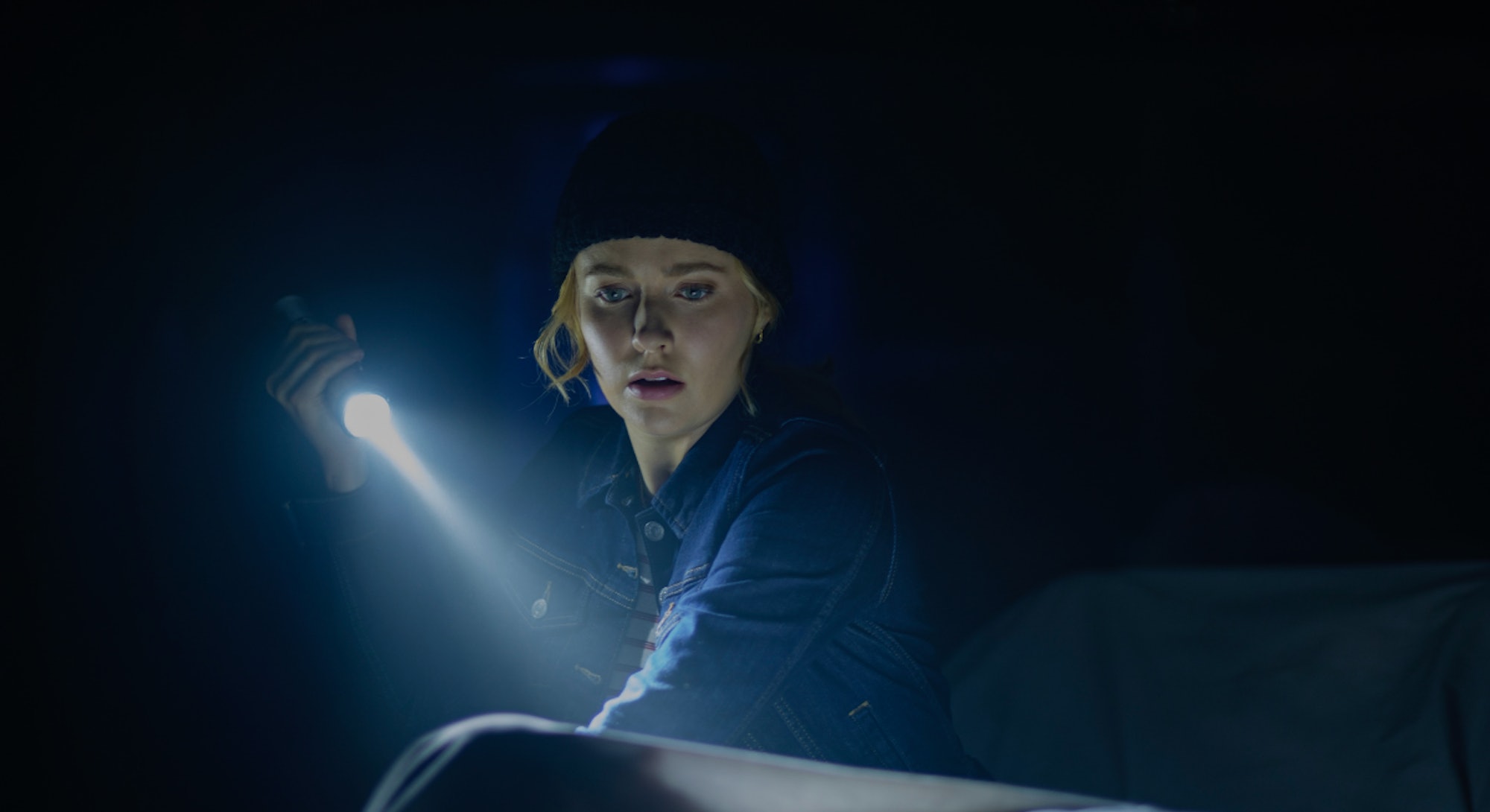 The plot thickened in Season 1, Episode 2 of Nancy Drew. Aptly titled “The Secret of the Old Morgue,” Nancy does indeed go searching for clues inside a morgue, but she happens upon a lot more than she bargained for. The series is still clearly working to establish the characters and backstory, but everyone is still a suspect in Nancy’s eyes — except George, who is on the road to forging a reluctant friendship with our protagonist.

Last week, we discussed our first impressions of Nancy Drew in a post-Riverdale world. Now that the series is starting to really get going, Inversers Mae Abdulbaki and Chelsea Szmania delve into the mysteries of Horseshoe Bay, why only Nancy can see Dead Lucy, the adults’ presence in a teen show, and exactly what the hell is up with Ace.

Warning! Spoilers ahead for Season 1, Episode 2 of Nancy Drew.

Why can only Nancy see Dead Lucy?

CHELSEA: Does Nancy have some kind of witchy powers we don’t know about? Because it seems like she’s the only one who can actually see this folklore ghost.

MAE: My first thought is that Dead Lucy has something to do with Nancy’s dead mom, so maybe they’re tethered somehow and that’s why she can see her.

CHELSEA: That’s certainly an interesting theory. We have extremely little background information on her mom, which I can’t help but wonder is intentional for the sake of mystery and intrigue.

MAE: Exactly. There haven’t even been any flashbacks to her mom, and even her dad became a suspect when he found out what Nancy had found in the attic and then lied about it before burning Dead Lucy’s blood-stained dress. Why else would he do that?

CHELSEA: Her dad is almost definitely involved in the Sea Queen’s murder in some way or another, but if I know anything about mystery tropes, it’s that he’s too obvious a suspect. I’m betting her mother is responsible and Carson is doing whatever it takes to protect her reputation.

MAE: It reminds me of Scream, when Sidney believed one thing about her mother only for it to be something completely different. Knowing how much Nancy loved her mom, her dad definitely seems the type to keep whatever secrets she had.

Who exactly manages this restaurant anyway? WHERE ARE THE ADULTS?!

CHELSEA: OK, I know this is a show for teens, but even Riverdale has a strong parental presence on the show…

MAE: Yes and no. Riverdale does have a strong parental presence, but the teens are the ones who are portrayed as morally sound. But hey, at least Pop’s is run by an adult. Can’t say the same for Horseshoe Bay’s resident eatery, the Claw.

CHELSEA: I’m genuinely wondering if I missed something in the way of them mentioning a restaurant owner because it seems like this show is being run by five kids (if you count Nick).

MAE: Same. We know George is the manager, but she can’t possibly be the owner. Unless, of course, Mr. Hudson is the real owner and he let George run the show because they’re secretly dating. My mind is wandering.

CHELSEA: It could be a plausible theory if not for the fact that when Hudson and his crew walked in that first night, no one aside from George seemed to know who the hell he even was. And while we’re at it, where is Nick’s family at?!

MAE: Good point. But it is strange that Hudson is Horseshoe Bay’s elite but no one knew who he was until his wife died. And Nick’s family, yes! Again, it goes back to the idea that Nancy Drew is keeping everyone at arm’s length for the mystery, which prevents even the adults from being a part of the story.

Whose side is Ace on?

MAE: At this point, it’d be great for Nancy to have her own Scooby gang, but Ace is probably working with whoever really killed Mrs. Hudson. Why else would he be snapping photos of his coworkers?

CHELSEA: You bring up an interesting point about her mystery-solving crew. Must it always be The CW’s style to make friendships form out of enemies instead of just, ya know, letting the show celebrate fortified relationships?

MAE: Right? Everyone needs a great group of friends and, although it does seem like she and George will grow closer, there isn’t a strong enough friendship on the show just yet. It’s frustrating because it makes it harder for the characters to grow and evolve.

CHELSEA: They feel like nothing more than stock characters, but this isn’t The Breakfast Club so why do they insist on hammering out these stereotypes without any real character development behind them?

Why is Nancy such a spoiled brat?

MAE: Throughout the episode, Nancy became harsh with Karen, acted out against her dad, and was playing judge to George’s life. Why is it that Nancy can’t react a bit more maturely?

CHELSEA: Though Nancy is presented to us in this “adult world” post-high school, working at the restaurant and barely in communication with her father (I can count the number of scenes they’ve had together on one hand), the show’s more pivotal events are a shocking reminder of how young she still is.

MAE: Yeah, she definitely has a lot of anger to work through. I know she is young, but she’s no longer in high school and she might be angry with everyone else when she’s probably just angry with her mom, so she acts out.

CHELSEA: Because we’ve seen so little fleshed out in this father-daughter dynamic, perhaps there’s more to Carson’s wrongdoings that could be fueling these angry, holier-than-thou outbursts.

MAE: Definitely possible. Last week, I found it odd that Nancy’s relationship with Carson was so strained. Again, the show hasn’t shown us why so it makes Nancy’s behavior come off as bratty and her dad as a suspect. It just seems like the show wants her to eventually suspect her dad, so they created this tense dynamic between them.

CHELSEA: I’d also love to know why Karen is even on the show other than to serve as a silent guardian angel for Nancy, because I’m not buying this quasi mother-daughter thing they have going on with the way Nancy treats her.

Easter egg alert! The blue roadster is now a part of Nancy Drew, but it has less of an emotional connection now than it did in the books.

CHELSEA: At the end of Episode 2, “The Secret of the Old Morgue,” Nancy’s boyfriend? Nick — or whatever it is we’re calling him — surprises her with a 1930s blue roadster, which is a subtle nod to her earlier glory days.

MAE: Ah yes, Nick did gift her the famous blue roadster in the books. It seems such a shame, then, that the car made an appearance prior to truly establishing their relationship.

CHELSEA: I hope this car doesn’t merely serve as a prop for a, I’ll say it, otherwise flat, one-dimensional protagonist. The car is cool, Nancy Drew as a cultural icon is cool — this adaptation of her … not so much.

MAE: Ouch, but I do agree she’s, so far, one-dimensional. The blue roadster, on the other hand, is probably meant to give the show more of an old-school vibe, which is a nice callback to the books. However, it just exists right now with no backstory, so it’s unclear how she came to have it. Maybe a gift from her mom instead of Nick?

CHELSEA: That whole scene was weird. Did he fix up a car for her? Is it her mom’s old car based on the fact that he put her necklace, which I presume to be a gift from her mother, in the car? It was difficult to enjoy the romantic elements of this scene without being distracted by the peculiar way in which it was set up — with no background information whatsoever.

MAE: I liked the romantic gesture, but that aside, it’s hard to really root for this couple when Nancy herself doesn’t seem all that established, and they’re really working the Nick-as-a-suspect angle. Unless I completely blocked it out, nowhere in the episode does it imply that Nick knew about her mom’s necklace.