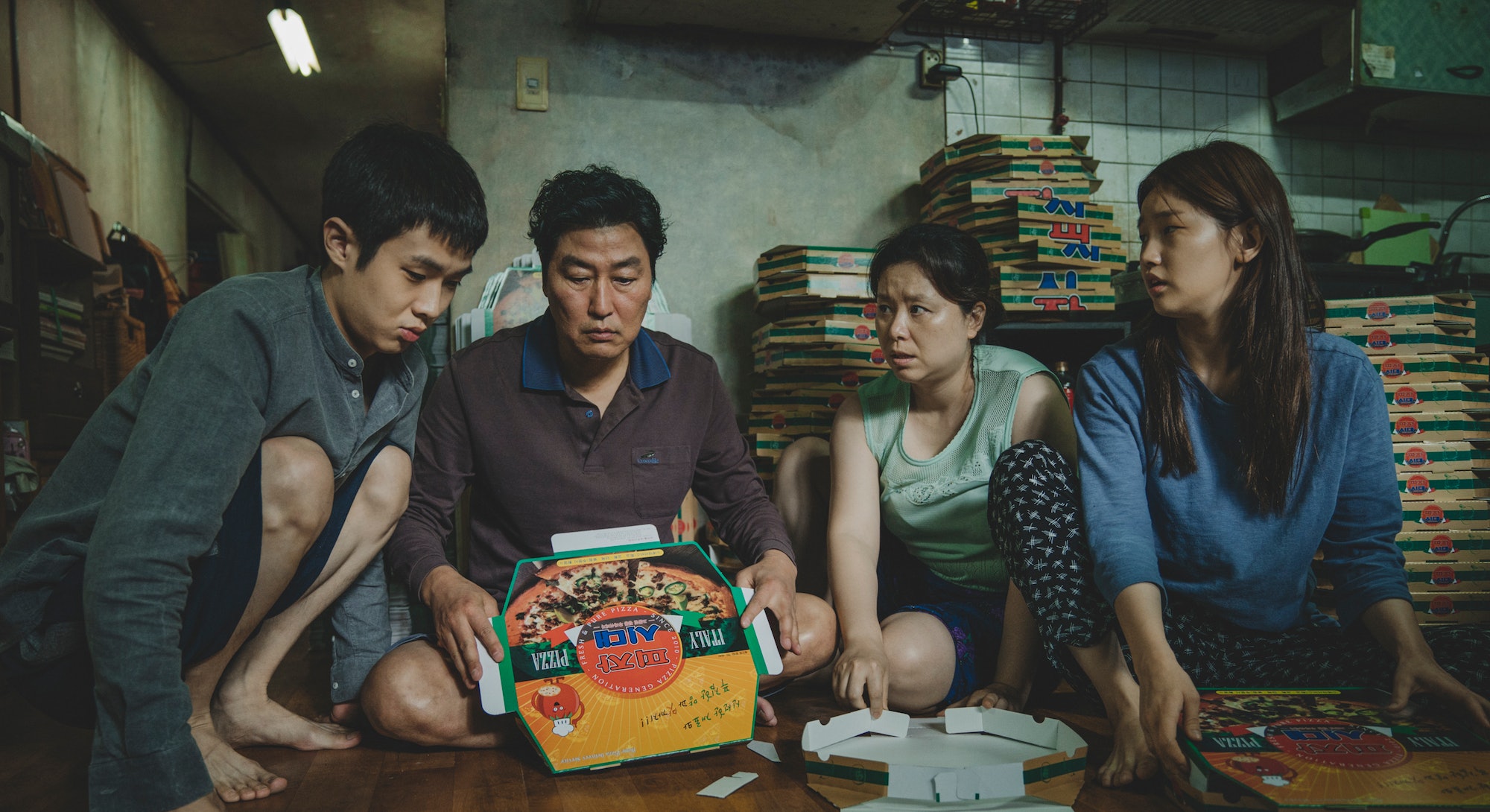 To anyone who grew up poor, there’s one tell that reminds you, is ingrained in you, why you’re not like the wealthy. It isn’t nicer clothes, newer cars, access to better education and health care, or even cleanliness. It’s your clutter.

Poor people keep stuff anywhere shit fits. Growing up, our dining table was where my family kept the computer. My older sister typed term papers and applied to college whilst besieged by coloring books, magazines, and scattered Ninja Turtles. On the rare occasion I found myself at a wealthy home, the homely clutter I found comforting was never there. At an early age, I discovered a paradox — that people who could actually afford stuff kept their spaces free from it, flattening the texture that actually suggested to outsiders, We live here.

No one says a thing about clutter in Parasite. Yet, poor people’s clutter and rich people’s feng shui is the most defining visual element in Bong Joon-ho’s newest satirical masterpiece. It’s the most vivid definition of class divisions yet seen in a 21st-century movie.

Set in modern South Korea, Parasite follows the Kims, a poor, conniving family who sneak their way into the lives of the wealthy Parks and their spacious, luxurious home. It starts with Ki-woo Kim (Choi Woo-shik) posing as an English tutor, with the rest taking key positions among the Parks. Sister Ki-jung (Park So-dam) masquerades as an art therapist, father Ki-taek (Song Kang-ho) becomes the family’s driver, and mother Chung-sook (Jang Hye-jin) takes over as housekeeper.

Some of the movie’s most enjoyable moments involve watching the Kims seamlessly dispose of the previous help and take over the Park home like a parasite eating its host from within. Each move is carefully choreographed — a ballet where the tools are women’s underwear and bloody napkins instead of tutus and pointe shoes.

But it’s when that plan hits a snag that Parasite really gets interesting. A dark secret in the Park home emerges from the basement and threatens to destroy everything. The careful illusion the Kims have constructed crumbles like a house of cards as the story races toward its violent end.

Darkly funny and emotionally gripping, Parasite is perhaps Bong’s best movie in an impressive oeuvre on class tension. While it eschews his genre-bending signatures — there’s no dystopian trains or giant monsters here — Parasite has all of Bong’s tried-and-true story beats.

Characters get what they want at a steep and ironic cost, emotional themes bubble to the surface through gorgeous and gross visual metaphors, and tense situations are the ones that conjure the loudest laughter.

Black comedy is one of Bong’s most distinct sensibilities, even if his unusual sense of mischief is often overlooked by his artistic ambitions. And Parasite is far from a straight comedy. In fact, the movie’s persistent sunshine (save for a long midway point that sees a damaging torrential downpour drown the city’s slums) only brings stark light to the ugliness of the characters. But Parasite is also profoundly funny; see a toilet backed up with poop explode in a way even Todd Phillips and Kevin Smith would have found gross. Schadenfreude truly is the name of Bong’s game.

Ultimately, it’s in the production design where Bong is at his most brilliant. As a satire of the tensions that divide the working class and the elite, Bong uses physical spaces to tell a million and one stories.

The Kims live a cramped, tight existence just below ground. Their nightly view is of drunk pedestrians who urinate on their window. You can smell their bathroom, stained with a sickly brown, through the movie screen. And because of all the clutter, one nasty flood means utter disaster. It’s little surprise when they briefly gain the Park house to themselves that they camp out in the living room to gaze upon the backyard’s green, suburban seclusion.

And it’s an envious view. The Parks live a life ripped straight from a furniture catalogue. Polished wood and flat, illuminated lines that shape the kitchen and living room hint at luxurious comfort without soul. Even their youngest, who has a museum-level obsession with Native American culture (stray suction arrows populate the home), has a room that could be completely spotless with a single run of a Roomba.

It’s not that the Parks don’t have warmth as a family — they actually seem pretty happy, if also bored. But they’re all too vulnerable to predators crawling in and out. Or, in the Parks' case, crawling underneath.

Bong’s thesis on wealth and capitalism in Parasite, as outlined in a Vulture profile, is that for the rich to have wealth, someone must be poor. This metaphor manifests literally, with the film illustrating wealth atop destitute misery. Bong takes this predatory relationship an extra step, showing how the poor pit themselves against each other even without the ruling class holding them. Comedy becomes tragedy as the film’s poor people turn their hostilities inward, only for the story to end with no one unscathed.

If your social media feed is any indication, wealth inequality is the issue of the minute that everyone seems to get. You don’t need Bernie and AOC memes when even mainstream movies like Joker bother to make empty references towards class divisions. But Bong’s Parasite is a journey, and a moving experience, that masks big-picture ideas about wealth and happiness amid tear-inducing laughs and anxious terror. Where Joker haphazardly duct tapes class warfare onto its plot, Parasite is a delicate, careful weave.

There’s one visual metaphor I can’t get over, and it requires some very light spoilers. Remember that rain I mentioned in the midpoint of the movie? The rain floods the Kim home with sewage water, forcing the Kims to swim up to their necks in actual shit at a point in the plot where there’s no turning back. In Bong’s film, the greedy aren’t always wealthy. But wealth has a way of drowning everyone, especially in a cluttered home.

Parasite is in theaters October 11.