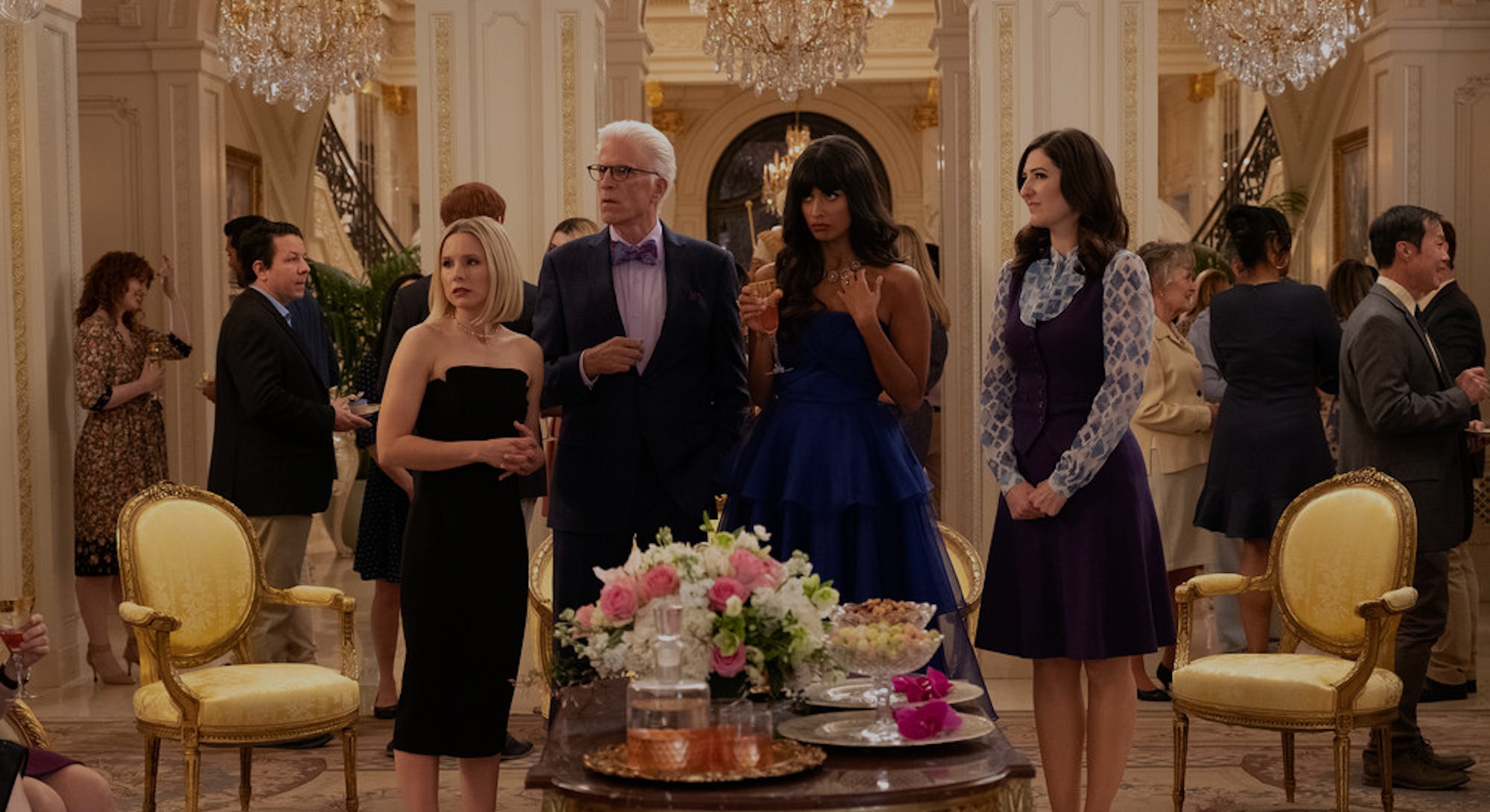 Holy motherforking shirtballs, The Good Place is finally back for Season 4! At the end of Season 3, Michael, Eleanor, and the rest of the gang made a shocking discovery: The points system was broken and humans hadn’t been allowed into the Good Place for hundreds of years.

But these benches weren’t deterred. The judge gave them a new challenge: They had one year to prove that terrible humans could change and become better people, essentially replicating what happened to our original heroes back in Season 1. Of course, this wouldn’t be The Good Place if it didn’t tug at the heartstrings as well. So when the Bad Place snuck Chidi’s ex-girlfriend, Simone, into the experiment, he asked to have his memories erased to avoid ruining the plan. What bullshirt!

Now that The Good Place Season 4 is here, Inversers Mae Abdulbaki and Chelsea Szmania weigh in on the premiere, Chidi’s fate, Eleanor’s leadership skills, and whether Brent is indeed modeled after Brett Kavanaugh. Let’s dive right in, cockroaches! Here are four questions we have after watching the first episode of our favorite sitcom’s final season.

Warning! Spoilers for The Good Place Season 4, Episode 1, “A Girl From Arizona, Part One” below.

4. Was it really necessary to reboot Chidi?

When the group comes up with a plan to rework the faulty points system, Chidi sacrifices his memories for the greater good of the afterlife, but at what cost to Eleanor’s growth?

MAE: Not really. Based only on the premiere, Chidi’s loss of memory and decentralization from the core four didn’t factor much into the new plan. It did, however, work to torture Eleanor for most of the episode. Who knows? Maybe Shawn knew that Chidi would sacrifice himself and prepared for it, knowing that Eleanor would lose her grip on the leadership responsibilities she is now shouldering. Chidi is such an endearing character, though, and he’s gone through so much over the course of three seasons. To reboot him was a major step backward, especially when it’s clear the other characters get to grow and learn in new ways. I trust this show a lot, but if the only goal for Chidi’s reboot is to mess with Eleanor’s head, then it’ll be more than a little disappointing.

"Once again we’re cheated out of getting to see Eleanor and Chidi function as a couple.

CHELSEA: Look, the reason The Good Place has been able to continue this narrative for as long as it has is because of all the ridiculous twists and turns. And this show is, by all means, absolutely ridiculous, but that’s what makes it work. There does come a point, however, when a show marketed on the absurd simply becomes too much. How many times are we going to reboot these characters’ memories to move the story forward? It’s bordering on lazy, and once again we’re cheated out of getting to see Eleanor and Chidi function as a couple, full memories intact. Perhaps there’s more at play here, so I’m willing to suspend disbelief and go along for the ride — I just hope it’s not, like you said, at the cost of Eleanor’s growth as a character.

3. How will Eleanor do as the “architect” of the Good Place?

Michael has “stepped down” and Eleanor has taken her rightful place on the architect throne — at least we seem to think so.

CHELSEA: It’s a little disappointing that Michael is taking a backseat this season as the show’s endearing demon leader with an affinity for simple human pleasures like riding the bus. But it also feels like a natural shift in the series to put Eleanor front and center. After all, The Good Place is a show about bad people learning how to be good, and all of Eleanor’s decisions up until this point have proven she’s evolved enough to take on the position of head honcho. There wasn’t a single reboot where she didn’t figure out Michael’s motivations, and she’s often the only one of the core four with a plan when demons are threatening to take them to the Bad Place. After centuries of getting her memories wiped clean and still coming out of it a better person, I’d say this girl knows a thing or two about how to lead the people to the Good Place.

MAE: I agree about Michael. It’s strange that he’s no longer leading, but characters can’t stay the same or else the show risks becoming stagnant. And honestly, Michael has taught Eleanor everything he knows, but she adds a new dimension to her role that Michael didn’t have: humanity. Now that Eleanor is in charge, she gets to branch out and grow in a wholly different capacity. While on Earth, she proved herself to be an irresponsible adult and now she’s shouldering the greatest responsibility of all. For the first time, Eleanor is thinking about everyone ahead of herself, which is a pretty phenomenal breakthrough considering her past. This newfound selflessness has helped her become a leader. That and a healthy dose of fear. Additionally, she’s had reboot after reboot to learn by Michael’s side and there’s no one who understands bad people more than Eleanor. It’s finally time for the student to become the teacher and so far, so good.

2. Is Brent just a Season 4 stand-in for Brett Kavanaugh?

The Good Place has always been good at balancing humor with social commentary and is swinging bigger than ever in Season 4. The series tackles toxic masculinity by introducing Brent, but is he actually meant to be Justice Brett Kavanaugh?

MAE: One of the most surprising things about The Good Place has been its philosophical leanings. I Kant believe how seamlessly they managed to discuss ethics and moral ambiguity. So naturally, the next step was to introduce Brent, who’s the epitome of toxic masculinity. He is a misogynist, a racist, and believes the world revolves around him. On the surface, he reflects a large number of rich, white men who’ve had the world handed to them on a silver platter, but the fact that his name is also Brent? That sounds awfully similar to Brett… as in Brett Kavanaugh. Yeah, that’s not a coincidence. I’m convinced nothing on this show is.

Prior to being appointed Associate Justice of the Supreme Court, Brett Kavanaugh was accused of sexual assault by Christine Blasey Ford and two others, though he denied the accusations. Despite the allegations and Ford’s testimony, Kavanaugh was still appointed to the highest court in the nation. It just goes to show that men like Brent and Kavanaugh are so used to getting what they want without consequences for their actions and nothing anyone does or says could convince them otherwise.

Eleanor and Michael have their work cut out for them with Brent, but my hope is that The Good Place uses his character as a way to talk to the audience about his behavior in an honest way instead of simply making him a gag. Perhaps they will be able to make progress and change him for the better, but they’ll have to convince him he’s a bad person first.

"Yeah, that’s not a coincidence. I’m convinced nothing on this show is.

CHELSEA: I gotta seriously hand it to The Good Place for refusing to color between the lines as a network TV show. Their jokes often come across as a coy wink at the viewers, and then other times, they really drive their point home. As you said, it’s no coincidence the character of Brent shares a striking similarity to Brett Kavanaugh. It’s doubtful the show would go on record to confirm this — I can’t imagine how many feathers that would ruffle — but the implication is there, that’s for sure. And even if Brent isn’t intended to share a likeness with the infamous Kavanaugh, the show’s commentary is clear: toxic masculinity exists everywhere, even on a charming show like The Good Place. It’s high time we stop ignoring this persistent problem and address it head-on — time’s up, folks! — and what better, more clever way to do this than on a show that teaches people how to grow and evolve with a second chance in the afterlife. It’ll be interesting to see how this character progresses, that is if Eleanor doesn’t strangle him first.

1. What is the best reference from the Season 4 premiere?

CHELSEA: If there’s one thing I picked up on relatively early, it’s that if The Good Place makes a pop culture reference, it’s definitely not cool that you like said thing anymore. (Hi, hard-core Red Hot Chili Peppers fan over here who’s no longer willing to admit that at will after The Good Place made fun of them.) But one of my favorite things about the show is it’s riddled with good-humored jokes that have a similar feel to when a cool teen says something that makes their parents cringe because they’ve realized they are indeed NOT cool anymore. Season 4 certainly continues on that trend by throwing a little Third-Eye Blind “Semi-Charmed Life” into the mix. If you grew up in the ‘90s, you likely still know every single line to this much-adored millennial anthem. But is it still cool that you do? Probably not so much.

MAE: I love how many references The Good Place drops into each episode. It keeps me on my toes (and I’ve admittedly had to look up a few of them). They’re like a pop culture factory on this show, and I laughed really loudly when Shawn and his demonic miscreants started singing the Kars4Kids commercial jingle “1-877-Kars-4-Kids.” It was so absurd and random (and therefore perfect). The song was also a reminder that there indeed was an organization that asked for car donations to fund educational programs for kids (though the commercials never actually said that, making it all the more ridiculous). When the song debuted in 2014, it was everywhere: on the radio, all over the internet, and on TV. No matter where you went, there it was to greet you like a Christmas jingle in July. Now that the song has made its way onto The Good Place, expect to hum it at the most inappropriate of times. Thanks for that, Mike Schur.