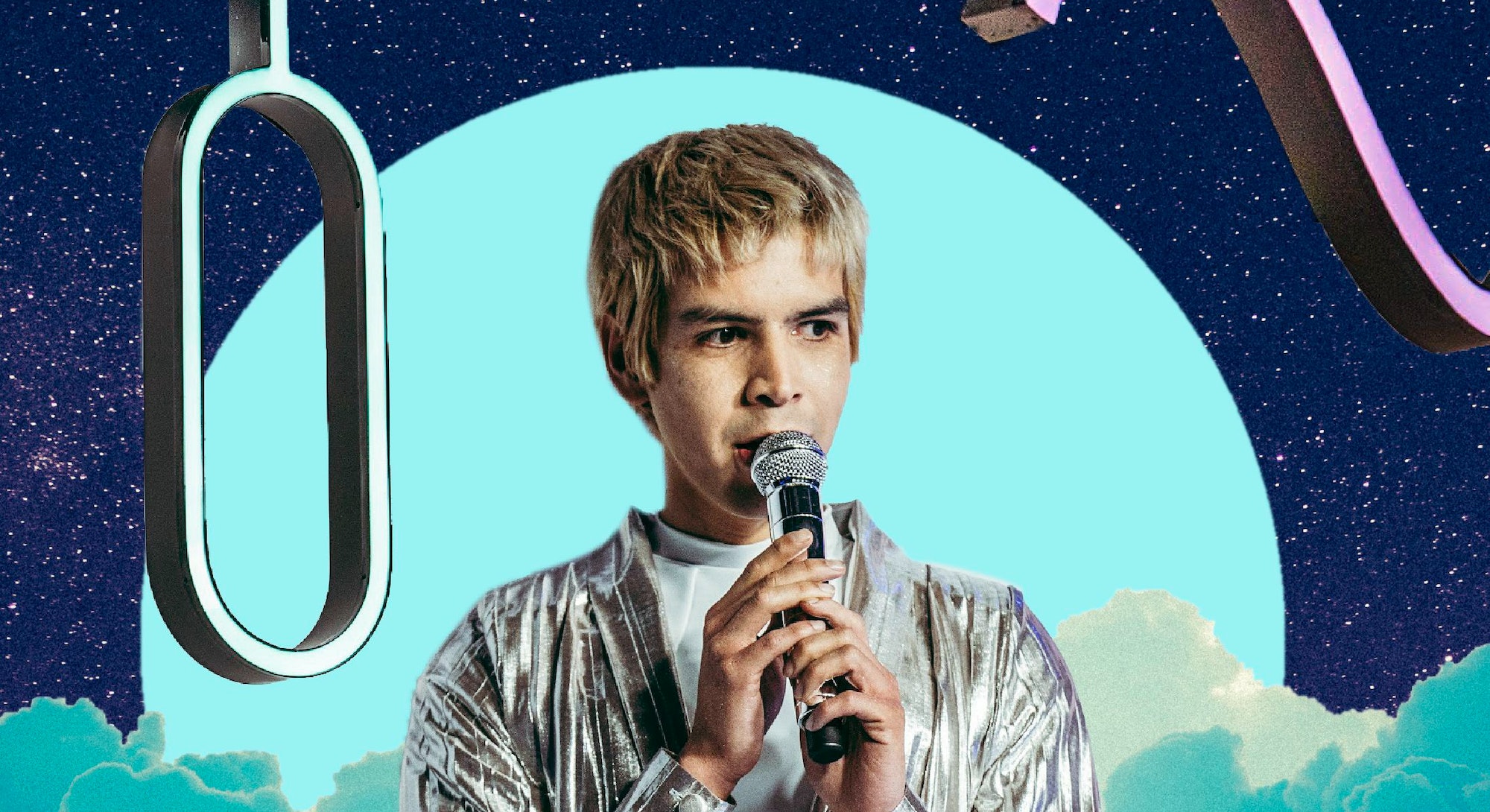 The morning before my interview with Julio Torres, I checked his Twitter account and was shaken to my core by a bewildering observation from this 32-year-old Saturday Night Live writer on the verge of becoming the next big thing in comedy.

“The letter Q comes up waaaaay too early in the alphabet,” he wrote. “We’re not ready for it where it’s currently placed. It belongs with fellow avant-garde acts, X, Y and Z, deep in after the mainstream.”

A few hours later, I was still thinking about it. By then I was across from Torres, seated in HBO’s high-rise offices on the west side of Manhattan and surrounded by plastic water bottles and Ferrero Rocher chocolates (a reference to a joke from his new comedy special My Favorite Shapes). I have to ask, and Torres doubles down on his argument.

These may sound like the ravings of the type of person you’d avoid on the subway, but Torres has carved out an unlikely lane in the comedy world by being as weird and melodramatic as possible (his best-known SNL sketch is about a Fisher-Price toy well for sensitive boys). At the same time, Torres sees himself as a curator, and that’s evident in My Favorite Shapes, which begins with the words, “I have a lot of shapes and not a lot of time,” before quickly unspooling into skits about an awkward conversation between Fred Flinstone and Betty Rubble, and a bit about the “nasty” curtain that divides first class from coach on airplanes.

For Torres, these off-the-wall observations, infused with his deadpan delivery, are what comes naturally. He’s about as far from Jerry Seinfeld as a comedian could possibly be, and I mean that in the best way possible.

“I cannot have a funny experience and relay it in a funny way,” Torres says. “I cannot have my dad come over and then say something funny. Or maybe I can, but I’m interested in the other type.”

Also read: Julio Torres Loves Space So Much He Wants to Die There

“I want to figure out what the best use of me is.”

Growing up in El Salvador, Torres always knew this was where he belonged: In New York, making comedy.

“Back home, my cable company sometimes would steal the NBC signal,” he says. “So I would watch local New York NBC and would even watch local New York news. Watching Sue Simmons report on stories and seeing commercials for Grand Prospect Hall really made me think like I was in New York.”

The real spark, however, came from watching Saturday Night Live on that same stolen cable connection in the early 2000s when a pair of non-white comedians consistently stole the limelight.

“For a brief bracket of time I got to see SNL and I loved it,” he says. “ Seeing Fred [Armisen] and Maya [Rudolph], I grew to love their work.”

When Torres finally made it to New York and got a job writing for SNL, it didn’t come as a shock. “This was the plan,” he says casually, but what came next was beyond anything Torres had even hoped for. Fred Armisen had been keeping tabs on the young writer behind some of his favorite recent sketches and offered him a role on a show Armisen was developing.

“He had this idea for a show in Spanish about horror makeup fans and artists,” Torres says. “So he asked me and my friend Ana [Fabrega] if we wanted to be in it and write on it, and that was just such a gift. What a dream to have Fred Armisen be like, ‘Hey, do you want to make a show with me?’ I’m so grateful. He’s been such a champion for what I do.”

Los Espookys aired on HBO this summer and a second season is in development (the day before our interview, Torres met with Armisen and Fabrega to talk preliminary ideas). And in the meantime, he’ll continue to write for SNL and develop his comedy.

It’s hard to say exactly what unifies Torres’ comedy style, and when I ask for a definition he deflects, saying “I like for other people do that.” After all, what connects a sultry commercial for “Cheques” starring Sandra Oh — “there’s nothing like furiously scribbling on a piece of paper, tearing it, flicking your wrist, and saying, ‘I trust this will suffice’” — to an extended scene where Ryan Gosling obsesses over the graphic designer who got away with using Papyrus for the font in James Cameron’s Avatar?

Maybe it’s a willingness to take weirdness seriously, but Torres never breaks, even when he’s cracking Jimmy Fallon up on The Tonight Show with Halloween costume suggestions (the lost city of Atlantis, a Ferrero Rocher chocolate). Or maybe it’s just the industry opening up to a new voice we’ve never heard before. Then again, maybe Torres’ comedy style can be best described by a sketch he wrote that still hasn’t made it into SNL.

“I have tried a couple of times a sketch called ‘Tiny Little Stairs’ about little stairs that you put next to your ear at night so that your dreams can come out and dance,” he says. “It was close to being an actual sketch. It might become a coffee table book.”

It’s easy to imagine each new joke coming into the world in the same way, as a tiny dream that escapes through his ears at night to dance and shows up as a sketch idea or a tweet the next morning.

With My Favorite Shapes, Torres has been able to bring those ideas into the physical world. By now, everyone knows that Julio loves shapes. He often receives them as gifts, but sometimes when he needs something specific and weird, he’ll turn to a friend, the artist Sophie Parke.

“For a few of them, I have the idea first and then I needed the object, he says. “I’ll say, ‘I need a swan with a neck so long, and I needed it clear to be its soul in black to be its shadow.’ And she just makes stuff like that happen.”

Torres’s humor doesn’t skew political — he stopped writing those Melania sketches for SNL after the “I really don’t care, do u?” jacket incident — but in his own life, it’s been impossible to avoid the impact of Trump. Torres immigrated legally and just obtained his green card, but he often feels on edge as a Latin American man in the United States.

“I feel paranoid,” he says. “I was on vacation outside of the states and I just wanted to fire up a political tweet and then it was like, ‘Maybe I should wait till they let me back in.’ I’m paranoid going through the airport, and I say that fully having the privilege of someone who’s been able to do it illegally, which is not the case where the people who are being hurt right now.”

Torres has done some work with the ACLU, but says he’s still figuring out how to use the limited influence he has to do some good.

“I do feel the need to address it in some way,” he says, “and I’m still trying to finesse the way I can use whatever little platform I have. Now that I have some downtime, I want to figure out what the best use of me is.”

At the same time, he sees the ongoing climate crisis as an equally important issue that needs to be addressed, and one that the entertainment industry isn’t doing enough about.

Assuming Trump or climate change doesn’t kill us all, Torres is excited for the future, and sees HBO and SNL as stepping stones to something even bigger.

“I want to be creating things I’m proud of,” he says. “Longer form things. Working on film would be great. But also, this whole summer I’m like, ‘Should I just design pool floaties or a resort wear collection` and then just like find a way of tying that with writing?’”

When I ask if he sees himself as a Kanye West-level mogul selling clothing and other products alongside his art, Torres says no. He’s not a fan of capitalism. He doesn’t want to sell you anything, but he sees his creative vision as extending beyond the writing to encompass every aspect of the storytelling, similar to the way he curated My Favorite Shapes.

“I am into furthering what that first experiment did in marrying comedy and visuals,” he says. I want to keep moving forward with that, because I have so many talented friends and family who can make things and design things.”

And if the opportunity presents itself, he does have a few more thoughts on the alphabet.

“The W, I think, is the first time they were like experimenting with form, because we were like, it’s the V, but you know what? We can, we can get playful. So then after that, after you ease us into that, then I’m ready for the Q, for the avant-garde. Some say that the K should go further back too. But that’s not an angles thing. It’s an attitude.”

Also read: Julio Torres Loves Space So Much He Wants to Die There

Julio Torres is a member of the Inverse Future 50.