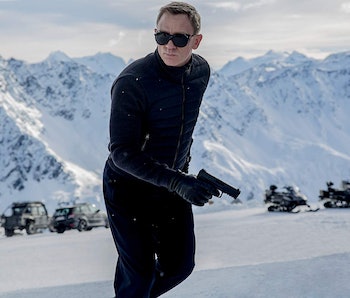 This article was originally published on July 15, 2019 and will no longer be updated. For all the latest updates on No Time to Die, check out this article instead.

Fall 2021 is looking real good right about now because it means a new James Bond film will be arriving in theaters. No Time to Die, the 25th installment in the James Bond film series, will feature Daniel Craig reprising his role as MI6 Agent 007. This will mark Craig’s fifth time playing the famed spy first dreamt up by author Ian Fleming, and his last as Craig passes the torch to a new actor.

Filming began in Jamaica in May 2019, where the film will begin before whisking audiences away on a new, tense mission. Here’s everything we know about No Time to Die, including new and returning cast members, release date, and more.

In August 2019, it was officially announced that the 25th Bond film would be titled No Time to Die. When speaking about the rationale behind it, producer Barbara Broccoli said, “We were struggling to find a title. We wanted a title that wouldn't give away anything but would be understandable, and after you see the movie, have a deeper resonance, because that's often what Fleming titles are all about

When is the No Time to Die release date?

The No Time to Die release date has shifted around quite a bit over the past year. The highly-anticipated James Bond film came close to hitting theaters in April 2020 but was delayed to November of that year because of the Covid-19 pandemic. The film was subsequently pushed from its November release date to an April 2021 release date... before that date was eventually abandoned as well.

Now, No Time to Die is scheduled to be released in theaters in the U.K. on September 30th, 2021, and on October 8th, 2021 in the United States. That is assuming those release dates hold, of course.

Is there a No Time to Die trailer?

There is! The last trailer for No Time to Die was released back in September 2020, months after the movie's original release in April. The trailer highlights all the coolest parts of the movie — explosions, stunts, cool new tech — all while summarizing the plot, which centers on a new villain, Safin (played by a scarred Rami Malek), who threatens the world. The only real "twist," if you can call it that, is an emphasis on Lashana Lynch as a new double-O agent who is primed to replace James Bond.

"I met your new double-O," Bond says in the trailer. "She's a disarming young woman."

But what's different about the No Time to Die trailer is how ineffably 007 it feels. As if riffing on all the classic movies and audience's perception of what makes up a James Bond movie, No Time to Die proudly booms the classic Monty Norman theme in a way no Daniel Craig movie has done before.

Despite the grittier 'tude of Daniel Craig on the surface, he was no stick in the mud. His James Bond knew how to have fun. (Only he would ever have a drinking game with a scorpion.) Yet No Time to Die sporting a James Bond making dry quips ("You could imagine why I've come back to play") and clinking glasses with Ana de Armas feels so very Sean Connery and Pierce Brosnan. It's really something else how much of a throwback No Time to Die appears. When de Armas casually unfurls a wrinkle-free tuxedo, it just feels right.

Who is the No Time to Die director?

No Time to Die was originally supposed to be directed by legendary British filmmaker Danny Boyle, but he left the film over creative differences. He was replaced by True Detective and Maniac filmmaker Cary Joji Fukunaga, who promises to bring his modern and stylish visual approach to the film.

What is the plot of No Time to Die?

No Time to Die picks up five years after the events of Spectre, with Daniel Craig’s James Bond living in retirement in Jamaica. The film follows him as he is pulled back into active service by an old friend (Jeffrey Wright’s Felix Leiter) and sent on a mission to rescue a kidnapped scientist, only to find himself coming into conflict with a dangerous and mysterious new adversary.

The film promises to wrap up many of the themes and plot lines that have been present throughout the Daniel Craig era of the franchise, including his relationships with Léa Seydoux’s Madeleine Swann, MI6, and the espionage world as a whole.

As the final James Bond movie starring Daniel Craig, it's also necessary that the franchise marks the film as a sort of "end of an era" because it is. Therefore, it is unsurprising that the movie (or at least its trailers) celebrates the franchise's entire familiar spirit rather than just the Craig era's distinctly non-traditional tone.

Who is in the No Time to Die cast?

Like most Daniel Craig-led Bond films, No Time to Die boasts an impressive cast of familiar faces. Predictably, there is a number of returning players, including Craig, Ralph Fiennes, Ben Whishaw, Naomie Harris, Christoph Waltz, and Léa Seydoux, all of whom are reprising their roles from previous Bond films.

Meanwhile, the film features a handful of exciting new additions to the franchise, like Ana de Armas and Lashana Lynch as two capable female agents that Craig’s Bond crosses paths with in the film. Rami Malek is also making his Bond debut as the film’s mysterious villain, Safin, and Jeffrey Wright is reprising his role as Felix Leiter, who was first introduced in 2006’s Casino Royale.

What’s all this about Lashana Lynch taking over as Bond?

Over the weekend of July 12, 2019, news rapidly spread that Lashana Lynch’s character, Nomi, would be revealed as the new Agent 007 in No Time to Die. A source speaking with The Daily Mail alleged the film would reveal Nomi to be the new 007 now that Bond has retired from MI6 and retired to Jamaica. This was confirmed by the No Time to Die trailer, which revealed Nomi when 007 was called in.

Considering this is confirmed to be Daniel Craig’s final Bond film, there’s a small chance that the 007 mantle could remain with Nomi. However, if it happens, it would be a monumentally modern move for the James Bond franchise. There has never been a non-white actor — let alone a non-male, non-white actor — in that role in the history of the franchise, and those in charge have often dodged giving clear answers as to why. Frequent defenses sit somewhere between “Bond was always male in Ian Fleming’s books” and “If it ain’t broke, don’t fix it.” That could all be in the franchise’s rearview mirror if Lynch really is the new 007.

How many James Bond films should I watch before Bond 25?

The James Bond film franchise is more than 50 years old, so re-watching the entire thing just to prep for one film is a bit much. But it’s not a Herculean task since you have four months until No Time to Die is out, giving you plenty of time to watch.

For the purposes of No Time to Die, you should probably just watch all of the Bond films which feature Craig as Bond. They are:

Once you finish binging, you’ll be all caught up and ready to see Craig in his next (and final) turn as Bond.

More like this
Culture
1 hour ago
How Vin Diesel tried (and failed) to take down James Bond
By David Grossman
Entertainment
November 16, 2022
Stranger Things Season 5 could finally fix the show’s biggest problem
By Mónica Marie Zorrilla
Entertainment
November 16, 2022
House of the Dragon Season 2 could show the decline of a powerful family
By Mónica Marie Zorrilla

This article was originally published on July 15, 2019