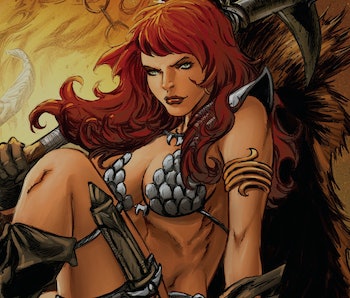 Red Sonja returns! Millennium Studios is looking to get in on the current hunger for comic book-adapted movies with a new Red Sonja movie, coming to theaters … soon? Based on the fierce female warrior character Red Sonja, who first appeared in Marvel’s Conan the Barbarian comics back in 1972, Red Sonja soon became a popular enough character to warrant getting her own Marvel run. Dynamite Entertainment helped revive interest in the Red Sonja franchise in 2005 and continues to publish new stories about the She-Devil with the Sword.

Getting this new Red Sonja film off the ground has been a chore for the better part of the past decade. Millennium has been keen to make an updated story for years. Director Robert Rodriguez came close when he and then-girlfriend Rose McGowan announced at Comic-Con 2008 he would be directing a Red Sonja film, and she would be starring. However, that project was pushed to the backburner. Now, after lots of hand-wringing and controversy over who would direct the forthcoming Red Sonja, a director and star have been locked down, and production can continue.

Here’s everything we know about Red Sonja, including who has been confirmed to direct, what the plot is, and the release window might be.

Who is directing Red Sonja?

Director Bryan Singer was initially attached to Red Sonja. The Hollywood Reporter noted Singer’s attachment in a September 2018 article, implying his work on past X-Men films likely helped get his foot in the door at Millennium Studios, who have been gunning to get a Red Sonja film into production for years.

In June 2019, Deadline was among the many outlets that confirmed Transparent creator Joey Soloway had been hired to direct. Soloway expressed excitement at helming the film in a statement to Deadline, remarking, “I can’t wait to bring Red Sonja’s epic world to life. Exploring this powerful mythology and evolving what it means to be a heroine is an artistic dream come true.”

No official date has been confirmed. The release is dependent on a few key factors, including what date Millennium wants to set for optimum returns at the box office (e.g., will it be a holiday movie? Or will it arrive during the summer, which is frequently packed with comic book movies?) and what kind of a shooting schedule is in place. There’s been no word yet on when Red Sonja will begin filming, nor has Millennium hinted, even vaguely, when they’d like to get Red Sonja into theaters.

Who is in Red Sonja’s Cast?

On May 5, 2021, Hannah John-Kamen was announced to be cast as the titular warrior. The British actress is known for her roles as antagonist Ghost in Ant-Man and the Wasp, her leading role in Syfy’s Killjoys, and her appearance as a Dothraki on Game of Thrones. No other cast members for Red Sonja have been announced at this time.

What is the plot of Red Sonja?

No official plot has been confirmed for Red Sonja yet, but it’s possible this new take on the Red Sonja story will function as an origin story introducing the new generation of fans.

Red Sonja’s backstory in the Marvel Comics is a grim one as it established her as a 17-year-old woman living in the fictional Western Hyrkanian steppes with her father, mother, and two brothers. Sonja is turned into “the She-Devil with the Sword” after a group of mercenaries kill her family, physically assault her, and take all of the family’s possessions. A broken young woman, the red goddess Scathach endowed Sonja with the incredible skill to handle any weapons, especially swords, under the special provision she would never be with a man unless he defeated her in fair combat. Did I mention Red Sonja first appeared in a Conan the Barbarian comic in the early 1970s?

Do I need to read every Red Sonja comic before seeing the movie?

No way! Catching up on Red Sonja by taking a deep dive into the comics is by no means a requirement to seeing this film when it arrives in theaters. As is the case with a wide variety of comics book-based stories being adapted into movies these days, origin stories are the usual first film framework and do lots of table-setting for audiences, especially those new to the franchise.

If you are looking to get into the Red Sonja comics and get a foundation set before seeing the film, you could start with the most recent takes on the character, including Dynamite Entertainment’s Red Sonja run, which began in 2005, or, more specifically, focus on famed comics author Gail Simone’s Red Sonja: Vol. 1 - Queen of the Plagues, which freshens up the Red Sonja story for newer audiences.

Do I need to watch previous Red Sonja films before seeing the new one?

Again, it’s not required you see the infamous Arnold Schwarzenegger-Brigitte Nielsen version of Red Sonja from 1985 before seeing Soloway’s upcoming version. But why turn down some fun movie homework? Especially when it involves Schwarzenegger and Nielsen? (Editor’s note: Um, Red Sonja (1985) currently has a 15% score on Rotten Tomatoes. You’ve been warned, I guess.)

Red Sonja is currently in development.