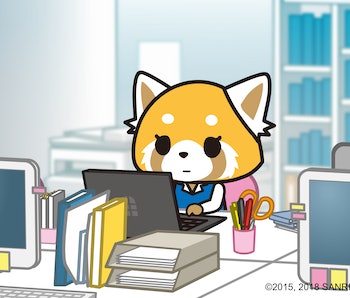 This article about Season 3 of the series Aggretsuko was originally published on June 19, 2019 and updated on May 24, 2021 following the release of the season on Netflix. Read on for the original article, with some new changes to reflect the latest updates on this topic.

When it comes to animated comedies that really get how weird and tough and wonderful adulthood can be, Netflix has the market cornered. Whether it’s Bojack Horseman, Tuca and Bertie, or the Ezra Koenig-helmed Neo Yokio, there’s something the streaming giant fundamentally understands about using the animated medium to really unpack big, serious, adult issues. Perhaps that’s why Aggretsuko has been so warmly embraced by adult fans.

The Sanrio character Retsuko has made her way to Netflix, presenting as a 25-year-old red panda who is sweet and only wants to be the best at her job. But life in the workplace comes with its regular set of annoyances, so Retsuko frequently channels her frustrations into regular metal-filled karaoke sessions after work. Here’s everything we know about Season 3 of Aggretsuko.

When was the Aggretsuko Season 3 release date?

Is there a trailer For Aggretsuko Season 3?

Yes! The trailer for Season 3 was released by Netflix in early August 2020, just a few weeks before the season dropped.

How many episodes were included in Aggretsuko Season 3?

Aggretsuko Season 3 consisted of 10 episodes lasting 15 minutes apiece. That continues the trend from Seasons 1 and 2.

How did Aggretsuko Season 2 set up Season 3’s plot?

Aggretsuko Season 2 took a more inward look at Retsuko’s life, analyzing her relationships to her family and her friends while still incorporating the wry depictions of life in the workplace that made Season 1 so beloved. Retsuko gained a new appreciation for some of her coworkers, like the very gossipy Kabae, whom she witnessed counseling another employee with a more mature attitude. For Retsuko, Season 2 was not just about managing the daily pressures of being a 20-something and trying to hold it all together, but really looking deep at preconceived notions she had about what adulthood is supposed to be like and what they’re really like.

Season 3 had Retsuko moving on from romance in exchange for falling more into her work. As she fills the void in her life with a virtual boyfriend, she’s left with her funds depleted. Luckily, a new opportunity opens up when her singing prowess is discovered and she’s recruited for a girl group. It ends up being a big test for Retsuko, as she tries to figure out managing her day job with a chance at stardom.

How can I watch Aggretsuko Season 3?

All three seasons of Aggretsuko are streaming on Netflix.

Will Aggretsuko return for Season 4?

Yes! Netflix announced the series would be returning in a super-cute holiday-themed tweet on December 23, 2020.

Do any other Sanrio characters have their own TV shows?

Unfortunately, the proverbial cheese that is Aggretsuko stands alone on Netflix as the only Sanrio character with a TV show. Popular Sanrio character Hello Kitty has had her own TV show in the past, but alas, she’s off the air. But if you’re looking to fill Aggretsuko-sized hole in your heart that’s craving for more twee animals, check out Rilakkuma & Kaoru on Netflix, an animated series based on the San-X character Rilakkuma.