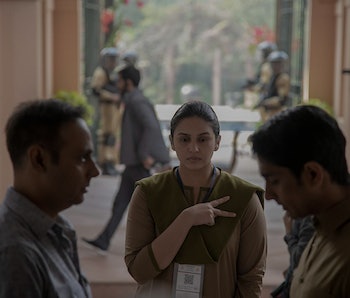 Hailed by Netflix as India’s first dystopian TV drama, Leila has earned comparisons to Hulu’s critically acclaimed The Handmaid’s Tale. The series envisions an India where one state, Aryavarta, has risen up above the others, proficient in technological advancements and able to provide for its people but demanding every ounce of blood, sweat, tears, and devotion from those people in return. As one woman living in Aryavarta searches for her daughter who was stolen from her by government officials, she begins to challenge those in power, putting her life — and her daughter’s life — in danger.

Here’s everything we know about Leila Season 2, including whether or not it has been renewed, what the plot of Season 1 covered, whether or not this series really bears any resemblance to The Handmaid’s Tale.

Has Leila been renewed for Season 2?

Leila has yet to be renewed for Season 2. There’s no precedent set for how quickly or slowly a renewal is handed down from Netflix. It could come any day, months from now, or never.

Is there a trailer For Leila Season 2?

Without a renewal and thus, production not yet underway on the new season, there’s no new footage or photos to share with fans eager to see more.

If Season 2 is a go, the trailer may be released one month before the season. This was the case when Leila’s Season 1 trailer was released in May 2019, one month before its June 14 premiere. If you want to refresh your memory on how the trailer set the tone and established the grim, dystopian vision of the fictional Indian state of Aryavarta, you can watch that below.

No confirmation means nothing is currently in production on Leila Season 2. Even if that confirmation did come through, time would be needed to develop a script, film, put the season through post-production, and get it ready to stream for Netflix.

How many episodes will Leila Season 2 have?

There’s no word yet on the episode order for Season 2. Season 1 had six episodes, which could be the series standard and expected Season 2 order.

What is the story in Leila Season 1?

Spoilers ahead for Leila season 1.

Season 1 follows Akbar’s novel while expanding on some elements. The year is 2047 and the action is set inside the fictional Indian state of Aryavarta, an innovative city of the future that is walled off from the rest of India. Inside, the city is prosperous but citizens are expected to live entirely at the mercy of Aryavarta’s governing officials. Outside, India has been ruined by famine, disease, war. It’s inhabited, but it’s not much of a life.

Viewers follow Shalini (Huma Qureshi), a woman who gets married “outside of her community” to Riz (Rahul Khanna) a Muslim man. The story begins when the couple’s daughter Leila (Leysha Mange) — “mixed-blood” in Aryavarta because her mother is Hindu and her father is Muslim — is separated from Shalini and Riz by guards known as Repeaters. Riz is killed by the guards and Shalini is brought to Aryavarta and expected to submit completely to the state. As she tries to survive, she also looks for answers to her daughters whereabouts, both inside and outside Aryavarta’s walls.

So, is Leila really similar to The Handmaid’s Tale?

Author Prayaag Akbar, who wrote the novel Leila upon which the series is based, acknowledged the similarities between Margaret Atwood’s novel The Handmaid’s Tale and the acclaimed series is been adapted into on Hulu and the story he wrote which has now been adapted for Netflix.

Speaking with Indian outlet The Hindu in 2018, Akbar explained:

“Shalini searches for Leila in a very different context, one that is shaped by a number of the most urgent concerns of Indian society. Atwood explores a gendered dystopia, something I would not presume to write. While Shalini suffers a great deal of gendered violence, there are different forces creating her world.”

For Akbar, Leila has deeper ties to the effects of living in India’s caste system, which has been part of Indian life for centuries and remains intact to this day. It is class, not gender, which fuels the dystopian nightmare of Leila. In the same interview with The Hindu, Akbar explained:

“To my mind, in India we are constantly told who we are. It doesn’t really matter whether we feel this or that or any other. I suppose my experience growing up as a — relatively deracinated — religious minority in Delhi brought this home quite sharply. Much later I began to think what that meant for society. Why it was so important for us to ascribe these minute identities of caste and subcaste to each other.”

How much do I need to know About the Indian Caste System & politics?

Viewers are not required to know about the caste system in India, a system of breaking up groups of people based on superficial things like class or income, or the political climate that has shaped the book and the TV series. However, understanding them would no doubt deepen and enrich the viewing experience and add weight to the drama unfolding onscreen. If you want to get caught up on contemporary Indian politics, definitely go watch Season 2, Episode 1 of Patriot Act With Hasan Minhaj on Netflix, which explains the most recent Indian election, or read Time’s primer on what was at stake in the election.

Is Leila based on a true story?

Leila is rooted in very real systems of government or social stratification, incorporating values and societal structures that feel like a continuation of things we see in our world today. The story may not be exactly based on something that happened, but all of the elements of the story are seemingly pulled from real life.

Leila Season 1 is available to stream on Netflix.