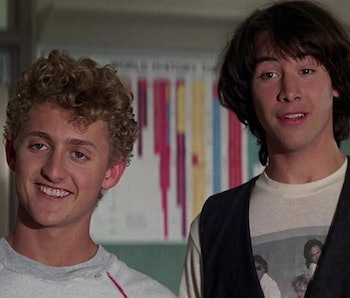 This article about the film Bill & Ted Face the Music was originally published on June 28, 2019 and updated on May 29, 2021 following the movie's release. Read on for the original article, with some new changes to reflect the latest updates on this topic.

Bill S. Preston Esquire and Ted Theodore Logan returned yet again in Bill & Ted Face the Music. It’s been more than 20 years since Bill & Ted stars Alex Winter and Keanu Reeves played Bill and Ted, two of San Dimas, California’s most chill residents and the two closest friends you could ever envision. And they’re not alone, with a slew of new characters along for the ride.

Rumors had been circulating for some time that Bill & Ted 3 was on the way. In 2016, Winter addressed those rumors to Forbes, saying a third film was in the works but some kinks still needed working out. By March 2018, Reeves and Winter were telling Entertainment Weekly they were very close to getting the green light thanks to the spec script written by returning Bill & Ted writers Chris Matheson and Ed Solomon. Then, in May 2018, it was confirmed at Cannes.

Here’s everything you need to know about Bill & Ted 3, including when and how it released, who was in the cast, and whether a fourth movie will happen.

What’s the official title of the Bill & Ted 3 Movie?

The titles for past Bill & Ted movies have been very much of their time and full of fun. Who doesn’t love an “Excellent Adventure” or a “Bogus Journey”? But the title for the third Bill & Ted movie, Bill & Ted Face the Music, is definitely more sobering and grown-up. Whereas the first two films were all about having a good time amidst some very strange circumstances, the third movie involved a very big reality check for our two favorite San Dimas residents.

When did Bill & Ted Face the Music release?

Bill & Ted Face the Music will be released on August 28, 2020. Bill & Ted stars Winter and Reeves confirmed the initial release date of August 21 in maybe the greatest announcement video recorded in human history?? Watch it for yourself below:

Things shifted a bit, though, with the COVID-19 pandemic. With other films being postponed, Bill & Ted Face the Music was bumped up to August 14 to help cover the schedule. But a delay in Christopher Nolan’s Tenet then pushed it back to a final release date of August 28.

When did production of Bill & Ted Face the Music start?

Production on the third Bill & Ted began Sunday, June 16, 2019. Alex Winter tweeted out confirmation of the big moment in the afternoon, writing, “Just got to location to shoot @BillandTed3. Making movies is a miraculous gig, but it’s also stressful & fairly nuts. Good to be here with @ed_solomon, our great director & producer, many folks I’ve known most of my life. We’re family, and that makes this all the more special.”

Is there a trailer for Bill & Ted Face the Music?

Yes! The first trailer for Bill & Ted Face the Music dropped on June 9, 2020. We can imagine it wasn’t coincidental that the trailer released on 6/9.

The plot of Bill & Ted Face the Music is all about Bill and Ted facing the pressures and realities of parenthood, adulthood, work, the future, diverted dreams, and beyond — all in a 21st century that looks very different from the one they probably envisioned when they were hanging out with Rufus back in 1989. Plus, they have yet to write the song Rufus told them would save the world, which is… kind of a big bummer.

“When we last met Bill and Ted they were time-traveling teenagers trying to pass history class and win the battle of the bands. Once prophesized to save the universe with their rock and roll, middle age and the responsibilities of family have caught up with these two best friends who have not yet fulfilled their destiny. They’ve written thousands of tunes, but they have yet to write a good one, much less the greatest song ever written. With the fabric of time and space tearing around them, a visitor from the future warns our heroes that only their song can save life as we know it. Out of luck and fresh out of inspiration, Bill and Ted set out on a time travel adventure to seek the song that will set their world right and bring harmony in the universe as we know it. Together with the aid of their daughters, a new crop of historical figures, and some sympathetic music legends, Bill and Ted find much, much more than just a song.”

Who returned for Bill & Ted Face The Music?

It wouldn’t be a Bill & Ted adventure without Reeves or Winter, so, of course, they’re coming back. the dynamic duo has been front-and-center building hype up for the third film for a while now. So it’s a foregone conclusion they’re back on board for this next adventure.

June 2019 was a big month for the Bill & Ted casting department as two separate casting announcements were released that helped to flesh out an already exciting cast. Part of the casting news was Variety’s report that Amy Stoch and Hal Landon Jr. would be reprising their roles. Stoch returned as Missy, Bill’s very young step-mom we first met in Bill & Ted’s Excellent Adventure. Landon Jr. returned as Ted’s dad, a local San Dimas police officer.

It was previously announced that William Sadler, who played the Grim Reaper in Bogus Journey back in 1991, would be returning, too. The Hollywood Reporter confirmed Sadler would be reprising his role as death incarnate back in March 2019, more than a year after voicing his hopes for a third Bill & Ted back in February 2018.

In additional casting news, some key roles were announced in late June 2019. In the same Variety report confirming Stoch and Landon Jr. were returning, it was announced Saturday Night Live cast member Beck Bennett was joining the film as Ted’s younger brother, Deacon Logan (truly genius casting, TBH). The Hollywood Reporter announced Barry baddie Anthony Carrigan had signed on to play the villain of Face of the Music.

Deadline reported that Glee alum Jayma Mays and Kevin Can Wait’s Erinn Hayes would also join as Bill and Ted’s wives, Princess Joanna and Princess Elizabeth, respectively. For those who may need their memory jogged, Joanna and Elizabeth were the two medieval babes Bill and Ted fell for during their time-traveling shenanigans in Excellent Adventure who were then transported to 1989 San Dimas with Rufus’ help.

Bill and Ted are dads now, so casting their daughters was going to be big news. Previously, Deadline confirmed Samara Weaving (Netflix’s The Babysitter, SMILF) and Brigette Lundy-Paine (Netflix’s Atypical) casting in Face the Music made its way to the internet. Weaving will play Bill’s daughter, Thea, and Lundy-Paine will play Ted’s daughter, Billie. Ever the best friends, it sounds like Bill and Ted named their daughters after each other, bonding the girls for life.

Both actresses have been mum about their casting. That didn’t stop the Instagram account for Face the Music from posting a most excellent collage featuring a throwback photo of Bill and Ted with screenshots from Weaving and Lundy-Paine’s audition tapes to show off just how much they look like their movie dads.

Shortly after that exciting casting news, The Hollywood Reporter announced Scott Mescudi, (aka, Kid Cudi), had also been cast. He ended up playing himself in the film

How did Bill & Ted 3 pay homage to Rufus?

Sadly, comedian George Carlin, who played Bill and Ted’s time-traveling pal Rufus, passed away in 2008. Rufus was an integral part of the Bill & Ted universe, first alerting the best friends to the place they would hold in history thanks to the power of their music back in Excellent Adventure. With Carlin gone, will Face the Music address Rufus’ absence?

Solomon confirmed to Digital Spy the film would definitely include an homage to Rufus and it would be done in a creative way:

“They return to that scene at the Circle K when Bill and Ted first meet themselves, only now they’re watching their younger selves and looking at the exuberance and joy that they had at that time in their lives. And they see Rufus, they see George Carlin.”

Kristen Schaal starred in the film as Kelly, Rufus’ daughter. The name was a shoutout to Kelly Carlin, Geroge’s real-life daughter. The real Rufus also made archival appearances via footage from the first film.

Who’s featured on the Bill & Ted Face The Music soundtrack?

The title and plot only further confirm that the soundtrack for this film would be nothing but the best thing landing in our laps during summer 2020. You really thought a movie that included the words “Face the Music” which is about two middle-aged California rocker dads who go on a historical adventure and encounter music legends wouldn’t have good music?!

The soundtrack for Bill & Ted Face the Music went in a different direction from previous films. Rather than keeping with the hair metal of the last two movies, the film instead brought in groups like Weezer, Mastodon, and Lamb of God. Music director Jonathan Leahy felt these bands represented the modern-day state of electric guitar and would be fitting for the updated setting.

Duh! Bill and Ted took to the stage as Wyld Stallyns at the end, in the most epic way possible. The duo realize to save the universe, their song has to be performed across all of space and time instantaneously. So the titular track “Face the Music” infinite copies of Bill and Ted, shredding until the end of time.

How did Bill & Ted Face the Music do at the box office?

Bill & Ted Face the Music grossed $3.4 million in the United States and Canada, and $2.8 million in other territories, for a worldwide total of $6.3 million. While this box office total seems abysmal, that’s because it was during the height of the pandemic. Wisely, the movie decided to direct its marketing to streaming services, including Amazon Prime, iTunes, FandangoNow, and Google Play. By the end of September, it had grossed an estimated $32 million from rentals. And in October, The Hollywood Reporter said it was the fifth most popular on-demand movie during the pandemic.

What did critics have to say about Charlie’s Angels?

Bill & Ted Face the Music has an 82% rating on Rotten Tomatoes and a score of 65 on Metacritic. Most critics enjoyed the long-awaited sequel, saying it captured the magic of the first two films while not retreading the same plot points and jokes.

If there are more adventures of the Wyld Stallyns to come, don’t expect Winters or Reeves to be involved. When asked if there could possibly be another film, writer Ed Solomon told DisccusingFilm, “I think we've finished with the Alex and Keanu Bill & Ted story. I think it's done.” However, he is open to a spinoff with daughters Billie and Thea as the new leads.

More like this
Entertainment
8.4.2022 2:42 PM
Joker 2 release date, cast, plot, and more for the Todd Phillips DC sequel
By Gabrielle Bondi and Dais Johnston
Entertainment
8.6.2022 12:00 PM
The real stars of Bullet Train deserved better
By Eric Francisco
Entertainment
7.27.2022 4:15 PM
Everything we know about Rick and Morty Season 6
By Corey Plante