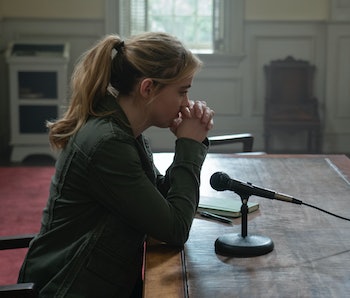 This article about Season 2 of the streaming series The Society was originally published on July 9, 2019, and updated on May 30, 2021 following the cancellation of the series. Read on for the original article, with some new changes to reflect the latest updates on this topic.

At one point in time, Netflix’s latest YA drama, The Society, was going to return for Season 2. The series, created, written, and executive produced by Christopher Keyser (Party of Five), is built on an intriguing elevator pitch: What if Lord of the Flies and The Leftovers had a baby and that baby grew up in the privileged society of West Ham, Connecticut, in 2019?

The Society stars Legion’s Rachel Keller, Big Little Lies’ Kathryn Newton, and Blockers’ Gideon Adlon. Season 1 is focused on a group of Gen Zers who return from a school trip only to discover that all of the adults and younger kids have mysteriously vanished. In the wake of their mysterious disappearance, the teens are forced to quickly mature as they figure out a way to survive. Of course, these teens don’t run a society in the way you’d expect, leading them to make increasingly difficult decisions along the way.

Unfortunately, the series was canceled in 2020. Here’s what we know about what would have happened in Season 2 of The Society.

Was The Society renewed by Netflix?

Originally, yes. Netflix renewed The Society for Season 2 on July 9, 2019. The Hollywood Reporter initially confirmed the series would return in 2020 but didn’t specify a date. In August 2020, Deadline Hollywood reported that Netflix reversed its decision, canceling the series.

Why was The Society canceled by Netflix?

On paper, it doesn’t make sense for The Society to be canceled. The show proved to be popular for fans and critics alike. And even amidst production difficulties, they were looking to film in the fall of 2020. Unfortunately, the cancellation came down to one thing: The coronavirus pandemic.

According to Deadline Hollywood, series like The Society and I Am Not Okay With This (which also got canceled) proved to have more complicated scheduling than other Netflix series. For The Society in particular, having to balance the schedules of a large youthful cast and paying for COVID tests and restrictions would significantly increase its budget. Unfortunately, when push came to shove, Netflix simply couldn’t afford another season of The Society in 2020.

Who would have returned for The Society Season 2?

It was expected that most, if not all, of the cast would return, except for Rachel Keller, Seth Meriwether, and Chloë Levine. (The characters played by these actors were killed in Season 1.)

What was The Society Season 2 plot?

In The Hollywood Reporter’s same coverage confirming the Season 2 renewal, series creator Chris Keyser offered this about where the show is heading thematically:

“[S]eason [one] deals a lot with men versus women, and it deals only briefly with race, but I think you can expect that conversation about class and race to keep coming up. All these things need to be re-litigated in a world in which there are no givens. We hope, over time, and if we’re lucky enough to get a season two, to explore all the social contract questions that we take for granted.”

The Society Season 1 covered a lot of ground over the course of 10 hour-long episodes. We followed a group of high school juniors and seniors from the sleepy town of West Ham, Connecticut, who were meant to go on a school field trip only to be returned to their hometown for vague reasons. Upon returning home, the teens realize they were the only ones left with no parents, government, or discernible social structures in place. They also discover that all roads out of town were mysteriously blocked by forests, as if their town had been dropped in the middle of nowhere.

Over the course of six months, the teens work to rebuild their lives, creating a new society where they attempt to form a governing body, ration food, and help each other through an otherwise confusing and upsetting situation. Things quickly spiral out of control as tough decisions, betrayals, and power plays are made, and cliques form, leading to deaths, arrests, and even more turmoil.

What questions were never answered in Season 2?

This is your last warning. Major spoilers ahead for The Society Season 1 finale.

The Society Season 1 left viewers in some very interesting places, that much is for sure.

The biggest question that needs to be answered is: Where exactly are all of the parents and community leaders of West Ham? The final scene of Season 1 quickly teased this, revealing Harry’s mom (and one of the town leaders) going into a library to read Peter Pan to the children of West Ham. Other adults stand in the back, listening, and everyone is wearing yellow ribbons as a sign of remembrance. The camera cuts to a plaque on the library wall listing all of the teenagers' names who have been living in isolation throughout Season 1. The plaque implies that the adults believe their teen kids are dead or that it’s all part of a constructed lie to explain why the teens aren’t with them. We still need major answers about where these West Ham adults and children are.

The other big question Season 2 needed to answer is why this is happening in the first place. Season 1 provided some clues about why the teens are living in what might be a replica of their hometown but are cut off from the rest of the world. Sam (Berdy) discovered documentation signed by his father and Cassandra (Keller) and Allie’s (Newton) father about the town paying to have a mysterious smell overtake the town (a plot point addressed in the pilot but never looked into over the season) and the men refusing to pay it. Additionally, some girls discovered photos they’d taken during the bus ride for what they thought was their school trip, realizing that their bus driver was an unknown man they’d seen at school right before this incident. Is this all connected? If so, what does it all hint at?

Other questions that needed to be addressed in Season 2 revolve around the teens. First, how will they survive the winter with dwindling food supplies and no clear plan about how or where to plant crops? These Gen Zers have proven themselves capable of doing things they have literally zero training for, including triage when a few teens are poisoned with antifreeze at Thanksgiving and helping one give birth, so it’s possible they could take up farming, too.

Second, what will happen to Allie and Will (Colimon)? The Season 1 finale saw Allie, the former town leader, and Will, her friend and pseudo-advisor, arrested for conspiracy to rig the election for town mayor. Their arrest was part of a coup formed by Lexie (Cox), Campbell (a confirmed sociopath and The Society’s primary villain, played by Wallace), and Harry (Fitzalan) to put Lexie in power. Season 1 ended with Allie and Will chained to a radiator in her house with no clarity on whether they’d get a fair trial, be freed, or possibly executed.

The Society Season 1 is currently streaming on Netflix.