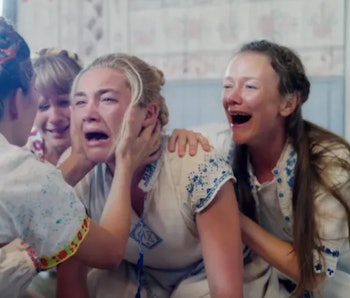 This article about the film Midsommar was originally published on May 14, 2019 and updated on May 12, 2021 following the release of the movie. Read on for the original article, with some new changes to reflect the latest updates on this topic.

Dust off those maypoles and gird your loins because Hereditary director Ari Aster returns with his latest grim vision, Midsommar. Juxtaposing the seemingly never-ending supply of sunshine against a rural Swedish pagan cult up to no good, Midsommar summons the dread of The Wicker Man with the quiet horrors of pastoral life as seen in Swedish films like Virgin Spring.

The release of Hereditary quickly established Aster as a writer/director worth keeping tabs on. Aster’s sense of world-building — as well as dread-building — put him on the map as a director with a unique eye. At the same time, his ability to bring supernatural horror into human events like family deaths or breakups offers a new, enigmatic way to look at the world. Here’s every single detail you need to know about Midsommar.

When did Midsommar release in theaters?

Midsommar released in theaters on July 3, 2019.

Is there a trailer For Midsommar?

The official trailer for Midsommar was released on Tuesday, May 14. The teaser trailer showcased the hazy summer aesthetic and leaned into the sense of dread permeating the film’s plot. In addition to these details, the trailer was more informative about what moviegoers, and especially fans of Aster’s, can expect from the film.

In the full-length trailer (embedded above), we get more of the backstory about the film’s central couple, Dani and Christian, and the reason why they and their friends head to Sweden for a midsummer celebration overseen by a pagan cult. Jarring shots of a vivisected bear, maypole dances, and unsettlingly cheerful locals in linens and flower crowns are seen throughout the trailer.

What is the plot of Midsommar?

Aster has called Midsommar “a breakup movie, in the same way that Hereditary is a family tragedy,” as well as colorfully describing it as a “Wizard of Oz for perverts.”

The trailer for Midsommar, while visually intriguing, is still pretty minimal on the details. Dani (Pugh) and Christian (Reynor) are a couple who have been together for about 4 years, but Christian is close to calling it quits. It also doesn’t help that Dani is dealing with the death of both of her parents, and Christian’s friends, Josh (Poulter) and Mark (Harper), are urging him to cut and run.

Instead of breaking up, Dani and Christian put some temporary emotional Band-Aids on the situation, and Christian invites Dani on the summer trip to Sweden that he, Josh, and Mark have planned (much to the guys’ chagrin). The trip, overseen by Pelle (Vilhelm Blomgren), is to a sleepy, remote Swedish village where a special midsummer festival is set to take place, and it only comes around every 90 years.

As Dani, Christian, Josh, and Mark get settled and participate in the increasingly eccentric and unsettling activities the locals have planned out for their midsummer celebration, Dani begins to feel something amiss. Trouble is, the locals won’t let her leave, and things quickly go from weird to horrific as the outsiders try to survive.

Ari Aster, who directed 2018’s chilling Hereditary starring Toni Collette, is back at it with Midsommar. Aster once again seems interested in exploring the pain of a specific form of a personal relationship quickly eroding. In Hereditary, it was the death of a matriarch, and in Midsommar, it looks like it’s a breakup.

Speaking with Vulture, Aster, who also wrote Midsommar, explains that the film is “less overtly a horror movie, but it’s still working in that same space. It’s very macabre. But people shouldn’t go in expecting Hereditary.”

Who is in the Midsommar cast?

Midsommar features a predominantly British and Swedish cast, and it’s a fairly small one at that.

Florence Pugh (Lady Macbeth, Fighting With My Family) plays the film’s protagonist, Dani. Midsommar marks Pugh’s second foray into horror (the first being 2018 indie Malevolent). Pugh continued to make a name for herself in Greta Gerwig’s Little Woman and a role in the upcoming Black Widow solo film.

On the Swedish side of things, newcomer Vilhelm Blomgren makes his feature film debut as Pelle, the group’s friend and guide to the Swedish village where they’ll celebrate midsummer. The cast is rounded out with various Swedish actors, including Liv Mjönes, Henrik Norlén, Anna Åström, and Julia Ragnarsson.

Is Midsommar Related to Hereditary?

Midsommar and Hereditary exist in separate universes, and there are no details that seem to overlap. Even if there are no connections to Hereditary, Midsommar delivers the same level of gore, chills, and creeps amidst an eerily familiar setting.

Is Midsommar based on a true story?

Midsommar isn’t based on a true story. However, it does incorporate elements of familiar stories we’ve heard before. Cults, and pagan cults, in particular, have existed for centuries and have provided fertile narrative ground for horror movies like The Wicker Man, Rosemary’s Baby, and Children of the Corn.

The midsummer celebration in Sweden is definitely a thing IRL and which Aster no doubt drew on while writing Midsommar. Taking place from June 19-25, a traditional Swedish midsummer celebration is all about celebrating the summer season and all its earthly delights. There’s lots of dancing around maypoles, gathering with friends and family, picking flowers to make wreaths, and eating traditional Swedish fare like pickled herring, boiled new potatoes with fresh dill, soured cream, and chives.

There are absolutely no blood-soaked sacrifices, weird cabins with creeptastic, centuries-old paintings on the walls, or ominous village elders watching your every move involved in a real midsummer celebration.

How did Midsommar do at the box office?

Midsommar grossed $27.5 million in the United States and Canada, and $20.5 million in other territories, for a worldwide total of $48 million.

What did critics have to say about It Chapter Two?

Midsommar has an 83% rating on Rotten Tomatoes, a score of 72 on Metacritic, and a C+ on CinemaScore. Reviews particularly praised Ari Aster’s direction, as well as the performance of lead Florence Pugh.

Midsommar was released in theaters on July 3, 2019.

More like this
Gaming
6 hours ago
Super Mario Bros. release date, trailer, cast for the Nintendo animated film
By Hayes Madsen, Jess Reyes and Jen Glennon
Entertainment
November 24, 2022
Is 1899 Season 2 renewed? Everything we know about the Netflix show's future
By Dais Johnston
Entertainment
9 hours ago
Star Wars news reveals the next movie will avoid Rise of Skywalker’s biggest mistake
By Dais Johnston

This article was originally published on May 14, 2019