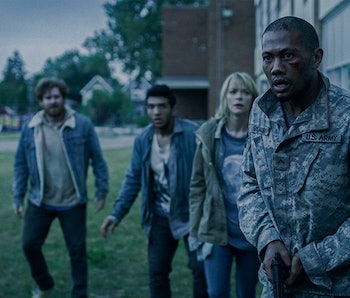 If you’ve been looking for a good zombie apocalypse fix lately and The Walking Dead just doesn’t cut it, then there’s a good chance you’ve already discovered (or need to discover) one of Netflix’s newest sci-fi TV shows, Black Summer.

Black Summer Season 1 follows Rose (Jaime King), a wife and mother who becomes separated from her daughter during an evacuation right at the beginning of a zombie apocalypse. Rose quickly joins up with a ragtag group of survivors (as you do during harrowing times like a zombie uprising) as they make their way to a known safety point that should include shelter, weapons, and other survivors.

Season 2 of the series was officially confirmed back in 2019. And though we’re still waiting on further details about the adventures of Rose and the gang, here’s what we know so far.

Is Black Summer renewed for Season 2?

Yes! In November 2019, over six months after the release of the popular first season, Netflix announced that Black Summer would be renewed for Season 2.

When is the Black Summer Season 2 release date?

Is there a trailer for Black Summer Season 2?

There’s no trailer released yet for Black Summer Season 2.

How many episodes will there be in Season 2?

Black Summer Season 2 has 8 episodes, the same episode count as Season 1 and as listed on IMDb.

Which cast members are returning for Black Summer Season 2?

In the Season 2 announcement, Netflix confirmed that cast members Jamie King, Justin Chu Cary, and Christine Lee would be returning in their roles of Rose, Spears, and Sun, respectively. Additionally, Zoe Marlett could likely return in the role of Anna, Rose’s daughter, and Kelsey Flower could potentially return as Lance, who went MIA during Season 1.

What is the plot of Black Summer Season 2?

Spoilers ahead for Black Summer Season 1

The plot for Black Summer Season 2 isn’t entirely clear at this point, especially because Season 1 seemed to end in a logical, satisfying place.

At the season’s end, Rose had completed her primary mission: reunite with her daughter, from whom she’s been separated in the first episode. We actually see the pair about to reunite, effectively closing that narrative loop. Additionally, the survivor’s group Rose was a part of only had three remaining members: Rose, Sun, and Spears. With Rose having completed her own arc, Sun possibly just looking to be evacuated, and Spears’ main drive — to protect Rose so she can see her daughter — satisfied, it’s tough to tell where Season 2 will go. However, there’s still the loose end that is Lance, who separated from the group in Season 1.

Beyond that, there’s plenty of directions for Black Summer to go. If The Walking Dead taught us anything during its nearly decade-long run, it’s the notion that there are plenty of enemies, obstacles, and twists of fate ready to mess up any good survival plan in the midst of a zombie apocalypse. We wouldn’t put it past the Black Summer writers to craft a tense, twisted Season 2, even if it’s tough to guess where the story will go from here.

More like this
Entertainment
8.4.2022 7:00 AM
The Sandman release date, time, plot, cast, and trailer for Netflix's dark fantasy series
By Jeff Spry
Culture
8.5.2022 10:30 AM
How Netflix's epic Sandman finale sets up Season 2
By Mónica Marie Zorrilla
Entertainment
8.12.2022 11:00 AM
Neil Gaiman teases a Sandman prequel on Netflix. Here's what that means.
By Mónica Marie Zorrilla