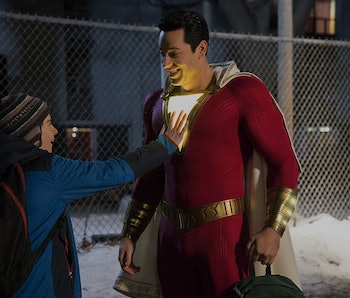 Color us not even a little bit surprised that a Shazam! sequel is in the works. Following its premiere in April 2019, Shazam! dominated at the box office, raking in a reported $56.8 million domestically during its opening weekend. Add in the excitement over the DCEU finally getting a movie that keeps things light and fun thanks to its stars, Zachary Levi and Jack Dylan Grazer (who play Shazam and Freddy Freeman, respectively) and it was only a matter of time before Warner Bros. greenlit the sequel.

Here’s everything we know about Shazam! 2, the highly-anticipated superhero sequel.

What is the title for Shazam! 2?

The title of Shazam! 2 was officially announced at DC FanDome in August 2020. The movie is titled Shazam! Fury of the Gods.

When Is the Release Date for Shazam! 2?

New Line Cinema initially announced Shazam! 2 would premiere on April 1, 2022. However, the COVID-19 pandemic greatly shifted production and the release schedule for many DCEU films. The current release date for the film is June 2, 2023. It is the latest announced film from DC to release, after The Suicide Squad, Black Adam, The Flash, and Aquaman 2.

Is there a Shazam! 2 trailer?

Not unless you consider the post-credits scene to be one, though it does hint at what could be coming next.

What is the plot for Shazam! 2?

It’s tough to say. Given that the origin story aspect of Shazam’s story has already been told, the sequel will be freed up to focus on new stories within the Shazam! canon. The post-credits did tease another classic and extremely weird Shazam villain (read out spoiler-filled explained here), so that may have been a hint at where the sequel is headed.

Who is writing and directing Shazam! 2?

In April 2019, The Wrap was among the many outlets reporting that Shazam! writer Henry Gayden had been re-hired to write the script. Gayden quickly confirmed the news on Twitter. It was later announced that director David F. Sandberg was also re-hired to help recreate the first film's magic.

No official announcements have been made, but it stands to reason that Levi will reprise his role as the titular Shazam (because of course he will, and also, that’s how big studio contracts work). Grazer will likely be back as Shazam’s partner-in-crime, Freddy. Similarly, expect to see Asher Angel return as Billy Batson because, without Billy, there is no Shazam.

You can probably also expect to see the rest of the Shazam family return. That includes actors Adam Brody (Freddy), Michelle Borth (Mary), Ross Butler (Eugene), D.J. Cotrona (Pedro), and Meagan Good (Darla), along with the kid versions of each character.

Additionally, many new characters will appear in Shazam! Fury of the Gods. YouTuber Rachel Zegler is set to star, playing a “mysterious key role,” according to Variety. Oscar-winner Helen Mirren will make her DCEU debut as the villain Hespera. Another evildoer will be Kalypso, played by Lucy Liu.

When will Shazam! 2 take place in the DCEU?

Since we don’t know too much about the plot for the sequel, it’s tough to say exactly when this movie will take place. But since we can safely bet Shazam! happens after Justice League, we’re willing to go out on a limb right now and guess that the sequel will happen sometime after the first film's events and, thus, a few years after the events of Justice League.

Never say never! Although it didn’t really come together in the first Shazam!, we know that this Shazam story is being told in a post-Justice League world. With that in mind, it’s entirely possible the Shazam sequel will nudge the hero closer to the Justice League’s ranks.

It’s also been hinted at in the past, though DC seems less interested in creating an extended cinematic universe to compete with Marvel than it once did. Then again, back in July 2018, producer Peter Safran spoke with Entertainment Weekly about the probability of Shazam joining the Justice League now that he’s been introduced into the DCEU.

“I wouldn’t be surprised to see Shazam play a role in the DCU,” Safran hinted to EW. “He exists in that world.”

Is Black Adam Still Going to Appear in Shazam! 2?

We know the DCEU is planning to release a Black Adam movie, and we know that Shazam and Black Adam will likely meet up in the future to battle it out. But — big “but” here — we’re not entirely sure if any mention or appearance of Black Adam will happen in the Shazam! sequel. Black Adam will hit theaters nearly a full year before Shazam! Fury of the Gods, so it remains to be seen if he’ll stop by for a face-off. We’ll have to wait and see how that all shakes out.