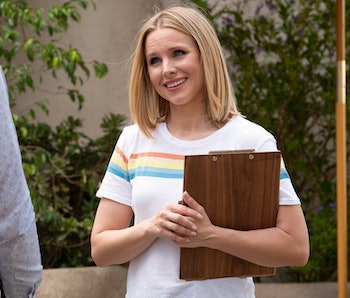 This article about Season 3 of the series The Good Place was originally published on February 8, 2019 and updated on June 12, 2021 following the release of the season on NBC. Read on for the original article, with some new changes to reflect the latest updates on this topic.

The Good Place Season 3 continued to be equal parts philosophical and hilarious. As the powerhouse ensemble cast returned to Earth for another chance at life, there were plenty of opportunities for shenanigans in what turned out to be the penultimate season of the NBC comedy. Here’s everything we know.

When was The Good Place Season 3 premiere date?

The Good Place Season 3 premiered on September 27, 2018. It started with an hour-long two-part episode.

Is there a trailer for The Good Place Season 3?

It’s not necessarily a trailer. But a sneak peek of The Good Place Season 3 dropped on September 12, 2018, only a couple of weeks before the premiere. You can watch it below.

How many episodes were in The Good Place Season 3?

The Good Place Season 3 had 13 episodes, the same as its previous two seasons. That includes the two-part premiere, which was aired together.

When did The Good Place Season 3 release on Netflix?

What happened at the end of The Good Place Season 3?

The comedy series has come a long way from Eleanor discovering the supposed Good Place was really the Bad Place at the end of Season 1. At the end of Season 3, Eleanor and the others were right back where they started. Only this time, they know the truth, and they’re repeating the experiment with new subjects to see if humans really can change for the better in a fake version of the Good Place.

However, the plan has already had a few hiccups. First, Michael panicked, and Eleanor had to step in and play the role of architect with new arrivals. Even worse, it turns out that the new experiment subjects, who were chosen by Bad Place demon Sean, were all picked to torture Eleanor, Chidi, Tahani, and Jason specifically.

That includes a blogger who tortured Tahani online. But that’s not all; Sean also chose Chidi’s ex-girlfriend Simone. As a result, Chidi decides to wipe his own memory (and Simone’s) to avoid ruining the experiment.

Season 3 ended with Eleanor preparing to welcome her boyfriend, who didn’t remember her, to the “Good Place.”

Did The Good Place Season 3 receive any Emmy nominations?

The Good Place was nominated for four Emmy Awards in 2019. They were:

Unfortunately, the show went home empty-handed from the Emmys ceremony.

Was The Good Place renewed for Season 4?

Yes! The announcement came in December 2018, in the middle of Season 3 airing. Unfortunately, after that, creator Mike Schur clarified that Season 4 would be the final season of The Good Place. He revealed he had always planned the series to run for four seasons in a follow-up statement, even with critical praise.