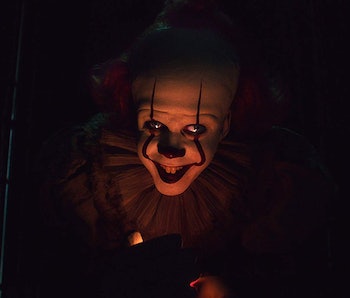 This article about the film It Chapter 2 was originally published on May 10, 2019 and updated on May 12, 2021 following the release of the movie. Read on for the original article, with some new changes to reflect the latest updates on this topic.

It Chapter Two, the anticipated sequel to 2017’s It, is finally here, and our excitement couldn’t be more palpable. The Losers’ Club of Derry, Maine are all grown up now, and they’re bringing us back home for one last fight against the demon that has plagued them their entire lives.

It Chapter Two picks up 27 years after the events of It, with the Losers’ Club drawn back to Derry after reports of a wave of new killings sound similar to Pennywise’s M.O., setting off alarm bells to the adult Losers. Despite leaving their hometown and moving on with their lives, they’ve been forever changed by their childhood encounters with Pennywise, the demon clown who devours children. It’s time to take him down once and for all.

It has been adapted in TV and film form several times since the original book was published in 1986. Still, virtually no version saw more success than the 2017 film version directed by Andy Muschietti. By the end of its run, It grossed a record-breaking $700.4 million worldwide. And that was only the beginning.

Here’s everything to know about the horror-filled sequel.

What happened in It?

Based on Stephen King’s iconic novel of the same name, 2017’s It details one of two separate encounters decades apart that a specific group of children has with a demon known as Pennywise, who appears as a clown. Known as the “Losers’ Club,” this gang of misfits first encounter It when they’re children. Pennywise is shown to prey on children and feed on their fears. The more frightened a child is, the tastier they are to Pennywise when he eventually eats them.

It showed the Losers’ Club banding together to try and take down Pennywise. Throughout the film, we are shown was scares each member of the club the most as they try to kill the demon. Although they don’t know it at the time, the Losers’ Club’s efforts to kill Pennywise don’t work. Years later, as adults, they reconnect again to face the creature one more time, which will be covered in Chapter Two.

What’s the plot of It Chapter Two?

The basic plot of It Chapter Two shouldn’t surprise anyone. Much like part one, the sequel will follow the source material pretty closely. Stephen King’s 1986 horror novel of the same name is split into two parts: one set in the ‘50s and one set in the ‘80s. The first movie covered the time period when the Losers’ Gang is still young.

The second reunites most of the same people for another confrontation with the monster 27 years later. That means for It Chapter Two, we’re dealing with a totally new cast.

What is the formal title of the It Sequel?

Was the first movie IT or It? We may never know for sure because the style of the film’s title seems remarkably inconsistent.

It does seem, however, like the 2017 remake film was formally titled “It.” The direct sequel’s official title is actually It Chapter Two. The first movie was “Chapter One” all along! Rest assured, however, that we’re all bound to see “IT” instead of “It” in plenty of places.

When did It Chapter Two release in theaters?

The sequel got an official release date back in September 2017 when Warner Bros. Pictures announced that It: Chapter Two would be released on Labor Day Weekend, specifically September 6, 2019.

That’s almost exactly two years after the first film’s release. Despite Labor Day weekend being a notoriously bad time to release a movie in terms of ticket sales, historically speaking, the first film saw a lot of success. It earned $123.1 million in ticket sales its opening weekend, breaking records for a September release and a horror movie release.

Is there a trailer for It Chapter Two?

The first teaser trailer for It Chapter Two was released on May 9, 2019. The majority of the teaser recreates a scene from the 1990 miniseries, which focuses on an adult Beverly revisiting her childhood home. In the scene, Beverly (played by Jessica Chastain) is shown into her old home by the elderly woman who lives there. As the woman prepares tea, Beverly goes into her childhood bedroom and re-discovers the romantic note that her childhood friend, Ben, gave to her anonymously. Upon returning to the living room, it becomes clear that something is…erm, not quite right with the old woman, who drops weird comments about how hot it is and how nobody who dies in Derry really dies.

The trailer eventually reveals the old woman’s father was an immigrant who worked in the circus. As this information is shared, Beverly looks at a photo of father and daughter together, and wouldn’t you know it, the father looks exactly like Pennywise. In fact, the photo shows to pair are standing in front of a cart that reads “Pennywise the Dancing Clown,” teasing Pennywise’s origins will be further uncovered in It: Chapter Two.

The trailer goes on to give us a preview of the adult Losers Club, teasing the ways in which each member is haunted by their first encounter with Pennywise and what new terrors await them as they try to defeat him once and for all.

Who’s in the It Chapter Two cast?

In the sequel, Bill Skarsgård returns as Pennywise the Dancing Clown, but the rest of the core cast has been replaced by actors who will portray adult versions of the same characters in a new conflict against It:

How did It Chapter Two do at the box office?

It Chapter Two grossed $211.6 million in the United States and Canada, and $261.5 million in other territories, for a worldwide total of $473.1 million. That’s, unfortunately, a little over half the amount its predecessor made at the box office, though its $91 million box office debut marks the second-best for a horror film. Some believe that ticket sales fell due to mixed critical reception and the lengthy three-hour runtime of the movie.

What did critics have to say about It Chapter Two?

It Chapter Two has a 62% rating on Rotten Tomatoes, a score of 58 on Metacritic, and a B+ on CinemaScore. Reviews generally praised the adult cast but felt the film was too long and not as scary compared to the 2017 chapter.

It Chapter Two was released in theaters on September 6, 2019.

More like this
Entertainment
6.21.2022 12:15 PM
Ethan Hawke is an instant iconic horror villain in The Black Phone
By Eric Francisco
Entertainment
6.19.2022 11:30 AM
You need to watch the best monster thriller of the '90s before it leaves HBO Max next week
By Mónica Marie Zorrilla
Culture
6.17.2022 11:31 AM
45 years ago, the worst Exorcist sequel almost killed the franchise forever
By Jon O'Brien