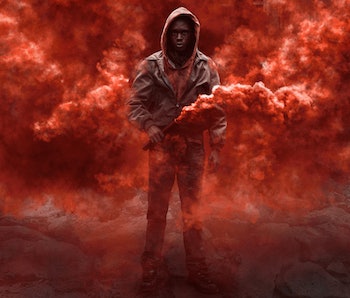 This article about the movie Captive State was originally published on December 11, 2018 and updated on April 22, 2021 following the film's release. Read on for the original article, with some new changes to reflect the latest updates on this topic.

A new alien invasion has arrived, and there’s nothing the humans in Captive State can do to stop it because it happened 10 years ago.

This sci-fi post-apocalyptic film, written and directed by Rupert Wyatt (Rise of the Planet of the Apes), explores what happens when it’s already too late for humanity. The film picks up 10 years after aliens took over the planet and established a governing body called “The Legislature.” Even before that, society was plagued by war, famine, crime, disease, and disasters.

As part of a historical record on a viral marketing website, one section reads, “In its darkest hours, an alien force saw opportunity and swooped in to enslave humanity under the guise of “peaceful unity.”

Intrigued? Here’s everything else we know about Captive State.

What was the plot of Captive State?

John Goodman plays Chicago Police Officer Mulligan, a man who fell in line with great zeal after the Legislature took over and is eager to please his alien overlords. Of course, not everyone is ready to fall in line. Ashton Sanders plays Gabriel, a young man who becomes connected with a rebellious organization called “Phoenix.”

Hence the synopsis: “Set in a Chicago neighborhood nearly a decade after an occupation by an extra-terrestrial force, Captive State explores the lives on both sides of the conflict — the collaborators and dissidents.”

When was the Captive State release date?

Is there a Captive State trailer?

Focus Features released two “teaser trailers” for Captive State in October and November 2018. Neither one offers much in terms of coherent plotlines. Like most teasers, it’s just a lot of flashy imagery cut together in a jarring way.

The first (above) feels similar to some Purge trailers in that’s it’s basically a political ad that boasts a strong “State of the Union” and lovely statistics like an all-time low unemployment rate. But it quickly becomes apparent that cameras are always watching as the human government strictly enforces their new laws. Eventually, a football stadium full of humans rises to salute a massive alien craft as it slowly flies overhead.

The second trailer (embedded at the top of this page) plays similar to the first, but intercut with the state-controlled propaganda are some red-tinged messages from rebels claiming things like, “It’s a lie!” The outcry for humanity to take a stand might fall on deaf ears, however, because in the end, we get a glimpse at one of the alien creatures, and it does NOT look pretty.

A full trailer for the film finally arrived in December 2018.

How did Captive State do at the box office?

Captive State’s opening weekend was not successful. The film grossed $3.1 million across 2200 theaters, finishing seventh overall. Overall, it only made $8.8 million, as compared to its $25 million budget.

What did critics have to say about Captive State?

Captive State has a 45% rating on Rotten Tomatoes, a score of 54 on Metacritic, and a C- on CinemaScore. The reviews ranged from middling to negative, with critics feeling like the visuals were messy, and the story was both uninteresting and clunky.

Captive State was released in theaters on March 29, 2019.