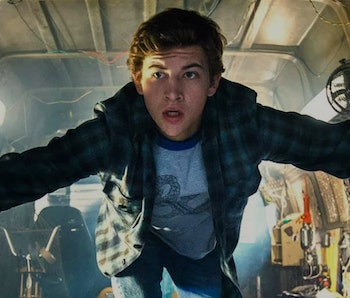 In the future, Ready Player One will be a cautionary tale. In its chilling vision of of the year 2045, there are no new books, films, movies, poems, video games, or thoughts being had by anyone. Instead, the only escapism that exists comes from mainstream pieces of intellectual property rights, all of which make up a virtual world that has enslaved the human race. In this hellscape, people’s brains are controlled by a random collection of pop-culture references, none of which even represent what they once meant. And there is no escape. You will play this game or else.

That description of Ready Player One is factually accurate. But tonally, it’s obviously not the intent of the story. Which is why the new film — based on the mega-popular novel by Ernest Cline — is so shocking. Director Steven Spielberg, screenwriter Zak Penn, and Cline, clearly believe this setting is fun. But it shouldn’t be. Ready Player One is a horror movie for a thinking person. It presents a bleak dystopia where originality has been replaced by fandom and characters have been obliterated in favor of clichés.

The following review of Ready Player One is spoiler-free.

The essential problem of Ready Player One is that ethically, it feebly suggests that everyone should unplug from all their various distractions and just live a life free of devices. But, because more than 90 percent of the narrative takes place in the virtual world of the Oasis, that message feels like a disclaimer, rather than a theme. As with the novel, knowledge of a specific collection of pop-culture interests can literally open doors for you in this VR world. Unsurprisingly, this means the stakes, plot, characters, and motivations all rely heavily on the audience understanding these references themselves. If The Matrix took place in Looney Tunes world and to win, Neo had to recite pieces of trivia about how Mel Blanc first recorded the voice of Daffy Duck, well, that is basically the premise of Ready Player One. The appropriation isn’t just a fun feature of the movie. It is the movie, to a fault.

To be fair, appropriation in adventure stories is a proud and honest tradition. Sherlock Holmes famously ripped-off Shakespeare so effectively that we associate the catchphrase “The game’s afoot!” more with Conan Doyle’s brainy detective than we do with the play Henry V. It’s unlikely that the flying DeLorean from Back to the Future Part II will similarly lose its identity, but that’s because in the Ready Player One school of references, you have to wink really hard at the camera and say “get it?” about fifty billion times.

It’s hard to know how to feel about the utter lack of originality in the film. In some sense, the sheer volume of other movie references blatantly creating this movie is sort of the point. But, in Cline’s novel, plucking a ton of film, television and video game references and plopping them onto the page felt more punk rock because at least it mixed mediums. In the movie version, the appropriation doesn’t feel daring. It’s more like a commercial for everything.

As a book, Ready Player One was a novel novel; a true combination of a high concept and easy pop references. It’s not a great work of literature by any stretch of the imagination, but because it was a book, the reliance on other art to make the bones of its world was somewhat artistic. But once all of that hodgepodge becomes this movie, it feels cynical and pandering. In one scene, the evil corporate mastermind Sorrento (Ben Mendelsohn) feigns being “cool” by having a bunch of pop culture references fed him in an earpiece from “real” nerds. This is a perfect metaphor for the movie itself: everything you see is Sorrento, pretending to be cool, but really, you’re just watching a carefully crafted product.

And that’s the biggest crime of Ready Player One. It reduces “geek” culture, and by extension, the future of art, down to two kinds of cliché people. In this vision of 2045, you’re either an evil corporate asshole like Sorento or a pure fanboy who would do anything for love like Wade. This leaves out a whole diversity of other people who have other viewpoints about gaming, science fiction, cinema, and writing, to say nothing about poverty and widespread violence. Ready Player One may want you to think it’s a battle cry for the oppressed, but it’s really just one more nail in the coffin of true creativity. We’re told the Oasis is a place for imagination, but instead, it’s a depressing future where imagination is just on loan for a while. And the scariest thing is, this future doesn’t really seem that far away.

Ready Player One is out in wide release on Friday from Warner Bros.