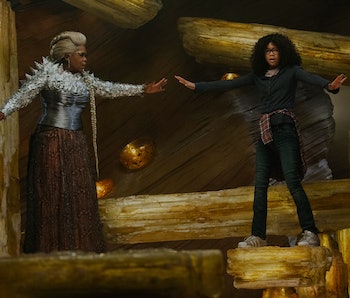 If after watching A Wrinkle in Time you think the movie was all over the place, don’t blame director Ava DuVernay. That’s how A Wrinkle in Time is supposed to be. The new Disney adaptation of the beloved 1963 children’s science fiction classic by Madeleine L’Engle sticks pretty close to the source material, creating a beautifully abstract movie that appropriately feels like it’s from another planet.

No spoilers ahead for Disney’s A Wrinkle in Time.

The early 21st-century renaissance of children’s fantasy and sci-fi literature has conditioned readers and moviegoers to expect large doses of world building. From Harry Potter’s Hogwarts to the Districts in The Hunger Games, the hows and whys of a science fictional setting are meticulously explained and managed. But A Wrinkle in Time’s script (adapted from L’Engle’s novel by Jennifer Lee and Jeff Stockwell) isn’t like other YA sci-fi. Just like the book, the world building in the film is subtle and slight. Which, is both refreshing and occasionally frustrating.

The closest contemporary pop culture cousin to A Wrinkle in Time, is probably Doctor Who, insofar as both narratives contain lots of heavy-handed moralizing, space/time travel, and enigmatic characters named “Who.” In fact, viewing A Wrinkle in Time as a big-budget kid’s movie version of Doctor Who is probably one of the easiest ways to love it. Because once you accept that criterion, you can accept that not a lot of this is going to make any sense. And that’s because the sci-fi rules aren’t very clearly delineated. In this story, people can “tesser”, which means they can move across space and time without using a craft of any kind. In the book, the noun of what they use is called a tesseract.

But, why can’t the time-traveling aliens — Mrs. Who (Mindy Kaling), Mrs. Whatsit (Reese Witherspoon), and Mrs. Which (Oprah Winfrey) — tesser into the evil planet? How do they specifically fight the IT; the personification of all evil in the universe? Unclear. Because the book wields sci-fi as abstractions, the specifics are intentionally up for interpretation. So, because the film adapts this vibe faithfully, these vagueries feel odd in a 21st-century big-budget sci-fi adventure movie for the whole family. In A Wrinkle in Time, thematic stakes are often the same as the actual stakes. In other words, the power love is a literal weapon.

As in the novel, young Meg Murry (Storm Reid) is searching for her father (Chris Pine) who mysteriously vanished while conducting some kind of experiment. It’s no spoiler to say that this story and its themes occupy a lot of what A Wrinkle in Time is about. Is it cool that Chris Pine tried to teleport himself with his mind halfway across the universe and ditch his family? The movie spends most of its time trying to answer that question, with mixed results.

The best thing about the film, other than the fact that it captures the whimsy and wonder of the book accurately, is Ava DuVernay’s beautiful direction. Her keen eye makes the story feel both large and small simultaneously, which is totally correct for the tone of the book. And though L’Engle’s prose is wonderful, even she couldn’t have imagined her beloved Meg and the time travelers looking this good. The casting works, and the film has the right sense of magic to feel like a worthy representative of a book many loved as children, but only remember hazily.

One of the best parts of both the film and the book is when Mrs. Whatsit tells Meg that she gives her “the gift of your faults.” The movie version of A Wrinkle in Time is the same. It’s bizarre, inconsistent, morally ruminative, and is plotted with abrupt starts and stops. But those faults make it what it is. And in a cinematic landscape populated by films willing to explain everything, and desperate to build a franchise, it’s nice to find one that is confident and strange enough to explain almost nothing and be content with just being itself.

A Wrinkle in Time is out in wide release on March 9.