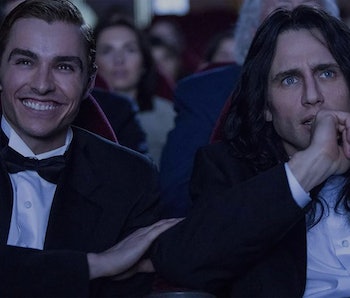 Even die-hard fans of The Room will admit that it’s not a good movie. In fact, that’s kind of the point. The film, a 2003 drama written, directed, produced by, and starring an eccentric oddball named Tommy Wiseau, is famously one of the worst movies ever made. For that reason, it is beloved, and has gone on to become a celebrated cult classic, the epitome of the “so bad it’s good” genre. The story behind the movie, which is almost as bonkers as the film itself, has now been adapted into a movie of its own in The Disaster Artist.

If you’re watching The Disaster Artist somewhat blind, though, you don’t know exactly how it ends. Without firsthand knowledge or appreciation of what the truly beloved cult classic The Room became, the story of the film’s making is an examination of Wiseau’s megalomania, misplaced confidence, and shocking levels of petty cruelty born from slights both perceived and real.

Adapted from the book of the same name written by The Room co-star Greg Sestero and author Tom Bissell, The Disaster Artist follows Sestero, played by Dave Franco, as he becomes friends with Wiseau and is drawn into Wiseau’s odd life and his equally odd movie. James, the elder Franco, who also produced and directed The Disaster Artist, plays Wiseau, and he is a lot. As a person, Wiseau seems borderline unbearable, the type of guy you might change subway cars or ask a waitress to reseat you in order to avoid being around. Franco plays the real-life eccentric expertly, nailing his sasquatch-like mane and body language, somewhat melted-looking face, and off-kilter, mumbled style of speaking.

Both Francos are exceptional in their roles, and side-by-side comparisons of Franco and Wiseau acting out scenes from The Room that air before the end credits highlight just how on-point James Franco’s acting was as he portrayed one of the most singularly awful actors ever to lead a film. Wiseau’s many quirks made The Room what it is, and the movie’s profound badness made both it and Wiseau beloved by legions of fans.

Before it became a cult classic, though, it was a nightmare filming experience. For newcomers to The Room, Wiseau’s monstrous on-set antics are more immediate than the film’s ultimate, unlikely success. Two scenes especially stand out. During one, the filming of a sex scene between Wiseau’s The Room character and the female lead, Wiseau berates her, throwing misogynistic insults at the actress to the point where other crew members threaten to quit or beat his ass. Later Wiseau refuses to allow Sestero to film a scene where he shaves his beard just a few days later than originally scheduled so that he could snag a part in Malcom in the Middle. (That subplot features Bryan Cranston as his pre-Breaking Bad self, which is a hoot). Even though Wiseau is supposedly friends with Sestero, he’s so petty and fragile that he ruins the opportunity, all the while terrorizing his entire cast with unreasonable demands.

As drama, it’s uncomfortable, unusual, and impossible to look away from. But, without firsthand knowledge of how things end up, it’s too cringeworthy to be fun — though there are plenty of uneasy funny moments.

The movie’s conclusion, set at The Room’s premiere as Wiseau sees the audience react in a totally unexpected way to his magnum opus, is perhaps a little too tidy given the mess that came before it. That’s for the best, though, because by going out of its way to show in a crystal clear fashion what The Room would go on to become, The Disaster Artist vindicates some of Wiseau’s earlier actions. That love isn’t there when you’re watching it, which casts everything in a sour rather than amusing light.

For fans of The Room, The Disaster Artist peels back the curtain and shows the crazy, mostly-true story behind this beloved piece of unexpected comedy. For newbies, though, it’s a fascinating film about a strange, abusive man who accidentally created a weird sort of art. A fellow Inverse writer who had seen The Room before seeing The Disaster Artist confirmed as much. While she was laughing at seeing what happened behind the camera during the filming of an iconic scene, I was just wincing in awe at what Tommy Wiseau had wrought.

The Disaster Artist is a good movie. What type of good movie it is depends on whether you’ve seen the bad movie. Either way, what a story.