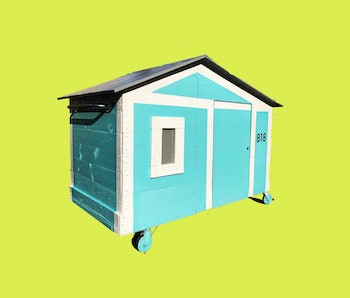 Before the novel coronavirus, homelessness in America was seeing a disturbing trend. Rising rent and stagnant wages had been driving a noticeable uptick in homelessness, with the unhoused population rising by 2.7 percent in 2019, according to numbers put out late last year by the US Department of Housing and Urban Development. One idea for relief that stood out: tiny houses.

The tiny home concept as we think of it today began in the '90s as a paean to minimalism, the trend later kicked into overdrive after the financial crash of 2008. Over the next decade, the trend emerged among hipsters, on cable TV, and then, for the homeless. A wide range of activists, from Seattle to Los Angeles to Georgia, have seen a clear and somewhat obvious advantage: tiny houses are smaller, which allow for them to be built at a rapid, efficient clip that bypasses many (or in some cases, all) of the bureaucratic measures that usually follow construction projects.

Alex Gano, an artist in Los Angeles, joined their ranks earlier this year. Gano isn’t a traditional homelessness activist — he’s worked with the heavyweights of Southern California art world like the Getty Museum, as well as smaller galleries and museums across the region. His “whole career is in the museum and exhibits industry,” he tells Inverse. “So I have a lot of experience building stuff — you know, exhibits, and then keeping them working.”

California has been particularly hard hit by homelessness, and Los Angeles County, which consists of L.A and 88 smaller cities in the same immediate area, has been the epicenter: a count by the Los Angeles Homeless Services Authority in 2019 found over 49,500 people affected by homelessness.

For Gano, building a tiny house was a “passion project” that made perfect sense. What happened next is a warning for anyone wondering how the homeless will affect the future of a society that's fighting the spread of Covid-19. (Covid-19 is already "surging" among the homeless population.)

Easy start, hard end — Working in art galleries and museums takes a lot of carpentry and construction — exhibits are regularly going up and down, and each one has to create a new experience. So for Gano, building a tiny house was all in a day’s work. Working independently, he didn’t have a budget, but that didn’t matter.

With the rest of the money, Gano bought a sleeping bag, floormats, lights, and other odds and ends. "The possibility to make something like this for next to nothing is definitely there," he tells Inverse.

Gano estimates he put “about $60 into it, but most of that was in outfitting it with stuff, making it cute and livable. Probably $12 in material in terms of the actual thing.”

The house Gano built looks like a single-level home miniaturized and on wheels: there’s a window, a slanted roof, and it’s painted robin's egg blue. The three-by-six structure had a “mid-century inspiration — not only that this is a mid-century modern architecture neighborhood — but that particular style of architecture, with the roofline the way it is, really lends itself to a spacious, open kind of feeling,” he says. As a local touch, Gano painted “818” near the door, a shout-out to his local area code.

House built, Gano was ready to give it away. He didn’t have to look far. There was a small homeless encampment near his house, under a freeway. There he met Julien, who fit all of the qualifications: he was homeless and not too tall (it’s called a tiny house for a reason).

Attempts to reach Julien, who does not have a cell phone, were unsuccessful, but in January he told the Los Angeles Daily News that “It’s more cozy in here and safer, because theft and random aggression is something I worry about a lot. It’s a step in the right direction and a nice gesture as a human being.”

As Julien was settling in, both he and Gano started to face a backlash. Gano saw it first, happening in private neighborhood groups online. He saw screenshots that listed his home address and blamed him for the rise in homeless persons in his neighborhood.

“Most of the people who saw it just loved it. They said, 'this is such a great idea, exactly what we need, more creative solutions.' This one small very vocal group just made it their personal vendetta to make sure that this thing did not stay on the street. And they set out immediately; they called the police, they called the city, they’re calling my partners.”

Getting doxxed is a painful experience, but Julien experienced the brunt of people’s anger, according to Gano. The wheels of the tiny house became a practical safety measure. Neighborhood watch groups and local authorities were determined to make Julien move, making his home the centerpiece in a cat-and-mouse game across the streets of Los Angeles.

“He wheeled it up further down the street, tried to hide it in the alleyway, covered it with a tarp trying to hide from the service’s truck,” Gano says. “Julien moved.and when they came back the next day after that 24-hour notice, they showed up like: four cop cars, two garbage trucks, a whole contingent of the neighborhood watch group was there.”

The threats became violent. And not just at Julien, but at the homeless population living in the area. Gano describes “residents who throw shit at them: people shoot paintball guns, bb guns, people threw a Molotov cocktail at him—just sitting there, they’re just sitting there. And even when I was talking to him, there’s, like, little subtle things that a lot of neighbors are doing—just revving their engines under the bridge, so you have like a loud bike or a big muscle car, revving the breaks, under the bridge and they do it all day long.’”

Eventually, L.A. City Sanitation took Julien’s house away. No reason was given, but L.A city councilmember Bob Blumfield told the Daily News that “It’s not as simple as rolling these things up to a safe parking lot, rubbing your hands together and calling it done,” citing proper permitting.

New plans brought to a halt — Despite the many setbacks that Julien’s home faced, Gano was excited for the potential. He was eager to work with the city to create a permitting process, envisioning a little village.

"Part of how these would work is in how the state parking works, is that you clear the parking lot during the day. So this would be a similar kind of thing: where you can have this, you roll it out at night, you sleep in it, and then you roll it back into a designated storage area during the day.

"It keeps the space clear, and allows us to work with churches and businesses and stuff to potentially use their lots as well as city space.”

Gano isn’t the first person to have such a vision. Tiny house villages have been successful in places as disparate as Seattle, Washington, and Savannah, Georgia. Los Angeles has been slow to act, but late last year, the city approved them as Accessory Dwelling Units, meaning that they could be built on an already-existing home’s property. It was a step toward legitimacy and Gano’s vision of parking lots converted into temporary shelters.

But then, coronavirus. “It was in motion,” Gano told Inverse this week. “Until everything stopped.”

After getting in touch with City Council, Gano felt confident that the effort for land for such a village was underway. But “it seems like everything has come to a screeching halt” ever since the coronavirus pandemic caused the shutdown of much of America in mid-March. “It doesn’t sell as well.”

NIMBY-ism (shorthand for Not In My Back Yard) has long been a struggle for people facing homelessness in Los Angeles: put them somewhere, but not near me.

Hundreds of protestors came out last year against a proposed homeless shelter in the Koreatown neighborhood. And now, with the added threat of coronavirus, the hostility has become official: when a hotel in Lawndale, one of the 88 cities in LA county, was leased for housing the homeless, the city responded with the threat of legal action revoking the hotel’s license to operate.

Governor Gavin Newsom has been forced to plead with the cities to get the homeless off the streets. “Cities that are blocking those efforts,” he said last week, “please consider the morality of those decisions.”

Gano has seen a few sparse improvements. The homeless encampment near his home has been provided with a bathroom and a handwashing station, a nod toward coronavirus best practices that have caused the encampment’s population to grow.

“I’m hoping when society’s gears start grinding again, these things might find their way into the conversation,” Gano tells Inverse.

As an interim solution that could add to public health and be acted quickly and cheaply, tiny houses are an answer waiting for a city to find the solution.