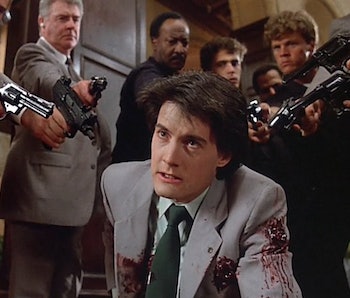 From The Terminator and Robocop to the slightly more obscure Hands of Steel and The Vindicator, the 1980s was the decade for the indestructible being that’s programmed to wreak as much havoc on the unsuspecting American public as possible. The Hidden has been all but forgotten compared to the endlessly quotable antics of Arnie and friends, but it provides as many pulpy thrills, and it's a far more accurate representation of the “greed is good” mood that defined the Reagan era.

Directed by Jack Sholder, the 1987 mash-up of alien invasion, body horror, and social satire centers on an extra-terrestrial slug capable of entering and controlling the bodies of other living creatures. Having traveled to Earth with a bucket list of debauchery and depravity, it's hellbent on sampling every vice the planet has to offer.

That's why previously mild-mannered, law-abiding citizen Jack DeVries (Chris Mulkey) suddenly transforms into a murderous bank robber before leading the cops on a cross-city car chase that defies the laws of physics, runs down numerous people, and, in a sign the film has its tongue firmly-in-cheek, involves two men carrying a sheet of glass.

The majority of policemen, including Michael Nouri's no-nonsense Thomas Beck, are understandably baffled. Their confusion grows when a comatose patient (William Boyett) escapes from his hospital bed and beats a record store clerk to death in broad daylight.

“Why would he come in here and kill a guy for a lousy hundred bucks and a radio?” Beck asks the cleaner-cut FBI agent Lloyd Gallagher (Kyle MacLachlan, warming up for his role in Twin Peaks). “Because he likes it. He sees something he wants, he steals it. If something gets in his way, he kills it. And right now, he's hiding out in your city,” is the ominous reply.

There’s a reason Gallagher isn’t surprised by all the strange personality transplants. As foreshadowed by his confusion over alcohol and everyday kitchen utensils, he too is revealed to be an alien. His family was wiped out by the ever-mutating thrill-seeker, and he’s on Earth to get revenge.

Watching this cat-and-mouse game unfold is a blast, particularly in the weird ways the killer disguises itself. At one point, it transforms into a lieutenant’s cuddly canine. Later it takes over the body of a senator, announcing a presidential bid that suggests its ambitions of power extend beyond Los Angeles. Unfortunately for the alien, its campaign to become the leader of the free world is cut shorter than Scott Walker’s, as within seconds its parasitical origins are exposed by Gallagher’s flame-throwing skills. Most memorably, it assumes the form of a stripper named Brenda Lee Van Buren (Claudia Christian), who turns murderous mid-coitus before becoming enamored with the sight of her own breasts.

Indeed, the ever-changing villain is all about instant gratification. It indulges in vehicular sex with a cat-caller just moments after becoming a woman for the first time. It rocks up to a car dealership and steals a red Ferrari after dispatching the salesman and coked-up test driver. “I want that car,” the possessed man deadpans before blowing their brains out. Even extra-terrestrials weren't immune to the trappings of ‘80s consumerism.

Nor, apparently, could they resist the lure of heavy rock. In keeping with its sex, drugs, and rock and roll lifestyle, the alien always takes to the streets with pedal-to-the-metal songs from the likes of The Lords of the New Church, Concrete Blonde, and Shok Paris. You half expect it to visit the Sunset Strip and start chugging shots with Mötley Crüe.

Sholder knows when to interrupt all the carnage with a well-timed visual gag or quick-witted one-liner, while MacLachlan and Nouri share a chemistry in keeping with the mismatched buddy capers of the era.

The Hidden isn’t a comedy, though. The man behind early ’80s slashers Alone in the Dark and Nightmare on Elm Street 2 is more concerned with delivering scares than laughs, something he succeeds at whenever the disgusting slug slithers its way into a new host’s mouth. There’s also something inherently creepy about the opening CCTV footage in which the possessed gunman looks straight into the camera and adopts a manic grin.

It’s not all brutality, as there’s a surprising amount of heart for a film that involves alien law enforcers and two car chases that feel like they both last for the duration of the Daytona 500. Although incarcerated by his partner-in-crime after trying to explain his true identity, Gallagher later sacrifices himself by transporting his life force into Beck’s dying body. The moment the latter’s young daughter and wife embrace the man they believed was at death’s door is an unexpectedly touching way to end a film so firmly steeped in ultra-violence.

But it’s how the movie taps into the era’s excesses that’s helped it attain cult classic status (and inspired an inferior 1993 direct-to-video sequel). It might not have been exactly what the 40th POTUS was selling, but the unnamed alien is simply living out his warped American dream.