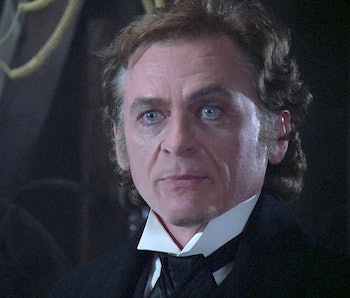 CBS/Paramount
We may receive a portion of sales if you purchase a product through a link in this article.
Ryan Britt
Jan. 25, 2023

To defeat Data and Captain Picard, Star Trek had to borrow from Sherlock Holmes. In two episodes of The Next Generation, a holographic version of Professor James Moriarty (Daniel Davis) hassled the Enterprise crew, and in Picard Season 3, Moriarty is back. But how did we get here? On January 25, 1993, the TNG episode “Ship in a Bottle” perfectly set the stage for the wrath of Moriarty.

Let’s turn the clock back a bit more. In the 1988 Season 2 TNG episode, “Elementary, Dear Data,” Geordi gets bored watching Data easily solve Sherlock Holmes mysteries on the holodeck and asks the computer to create someone who could defeat Data. Crucially, they don’t say Holmes, but Data. And so, thanks to the super-efficient and very literal Enterprise computer, a sentient Moriarty AI (Daniel Davis) was born. At the end of the episode, after Moriarty nearly takes over the ship, Picard agrees to help figure out how to give him life outside of the holodeck, because to Picard all life is precious. Even Victorian supervillains.

The notion of sentient hologram rights would be explored extensively in Star Trek: Voyager, but what happens in Moriarty’s second appearance, the TNG Season 6 episode “Ship in a Bottle,” is where that conversation begins. In the 24th century, holodeck characters are treated like video game characters; they’re no more real than any other fiction. What “Ship in a Bottle” does is ask what would happen if a video game character left the game and entered the real world. What rights would they have? As Picard says, “the moral and ethical implications are... overwhelming.”

But “Ship in the Bottle” is more classic Star Trek villain creation than sci-fi head-scratcher. The crew wants to believe that Moriarty’s past as a super-criminal has nothing to do with his future, but he’s up to his old tricks and tries to take over the Enterprise again. It turns out he didn’t leave the holodeck at all, but instead created a simulation of the Enterprise within his own simulated environment, thus tricking Picard and Data. In the end, Picard turns the tables and creates a simulation inside this simulation in which Moriarty believes that he and his girlfriend, Countess Regina Bartholomew (Stephanie Beacham), are traveling the stars in a shuttlecraft all their own. It’s really a ship in a bottle inside another bottle.

While the tone of “Ship in a Bottle” is light, the fact that Moriarty is back in Picard Season 3 suddenly changes the character. It’s been three decades since Picard left Moriarty trapped in a simulation, and it’s a safe bet the latter has figured out the ruse and wants revenge. Jean-Luc will probably be as surprised as fans were back when Daniel Davis appeared in the New York Comic Con trailer for Picard Season 3.

“Any chance to bring Moriarty back was something I was going to jump on,” Terry Matalas told me in late 2022. “I had to convince a lot of people that it was meaningful at the studio and the network, too, who weren't necessarily familiar with those episodes and that character. But they agreed and we did it. And then now, he's in the trailer! I think what Moriarty does is, if you're a hardcore Star Trek fan, like me, it's kind of a way of telling the fans that they're seen.”

Matalas also made it clear that Moriarty’s return isn’t just fan service. “We needed to do it organically, we couldn't just jam it in,” he said. It’s still unclear what Picard Season 3 is about, but Matalas said, “Moriarty is part of a puzzle. And when the puzzle reveals itself, you’ll understand why Moriarty was a part of this.”

When Arthur Conan Doyle first created Moriarty for the 1893 Sherlock Holmes story “The Final Problem,” everything about the arch-enemy of Holmes was a retcon. Moriarty had appeared in none of the preceding novels and stories, making his “final” battle with Holmes very sudden. He would later be fleshed out in a flashback novel, but his addition to the Homes canon was rushed.