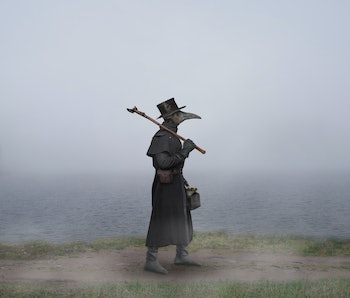 Language always tells a story. As COVID-19 shakes the world, many of the words we’re using to describe it originated during earlier calamities – and have colorful tales behind them.

In the Middle Ages, for example, fast-spreading infectious diseases were known as plagues – as in the Bubonic plague, named for the characteristic swellings (or buboes) that appear in the groin or armpit. With its origins in the Latin word plaga meaning “stroke” or “wound”, the plague came to refer to a wider scourge through its use to describe the ten plagues suffered by the Egyptians in the biblical book of Exodus.

An alternative term, pestilence, derives from Latin pestis (“plague”), which is also the origin of French peste, the title of the 1947 novel by Albert Camus (La Peste, or The Plague) which has soared up the bestseller charts in recent weeks. Latin pestis also gives us pest, now used to describe animals that destroy crops, or any general nuisance or irritant. Indeed, the bacterium that causes Bubonic plague is called Yersinia pestis.

The Bubonic plague outbreak of the 14th century was also known as the Great Mortality or the Great Death. The Black Death, which is now most widely used to describe that catastrophe, is, in fact, a 17th-century translation of a Danish name for the disease: “Den Sorte Død”.

The later plagues of the 17th century led to the coining of the word epidemic. This came from a Greek word meaning “prevalent”, from epi “upon” and demos “people”. The more severe pandemic is so-called because it affects everyone (from Greek pan “all”).

A more recent coinage, infodemic, a blend of info and epidemic, was introduced in 2003 to refer to the deluge of misinformation and fake news that accompanied the outbreak of SARS (an acronym formed from the initial letters of “severe acute respiratory syndrome”).

The 17th-century equivalent of social distancing was “avoiding someone like the plague”. According to Samuel Pepys’s account of the outbreak that ravaged London in 1665, infected houses were marked with a red cross and had the words “Lord have mercy upon us” inscribed on the doors. Best to avoid properties so marked.

The current pandemic, COVID-19, is a contracted form of Coronavirus disease in 2019. The term for this genus of viruses was coined in 1968 and referred to their appearance under the microscope, which reveals a distinctive halo or crown (Latin corona). The virus comes from a Latin word meaning “poison”, first used in English to describe a snake’s venom.

The race to find a vaccine has focused on the team at Oxford University’s Jenner Institute, named for Edward Jenner (1749-1823). It was his discovery that contact with cowpox resulted in milkmaids becoming immune to the more severe strain found in smallpox. This discovery is behind the term vaccine (from the Latin vacca “cow”) which gives individuals immunity (originally a term certifying exemption from public service). Inoculation was initially a horticultural term describing the grafting of a bud into a plant: from Latin oculus, meaning “bud” as well as “eye” (as in binoculars “having two eyes”).

Although we are currently adjusting to social distancing as part of the “new normal”, the term itself has been around since the 1950s. It was initially coined by sociologists to describe individuals or groups deliberately adopting a policy of social or emotional detachment.

Read more: A history of English ... in five words

Its use to refer to a strategy for limiting the spread of disease goes back to the early 2000s, with reference to outbreaks of flu. Flu is a shortening of influenza, adapted into English from Italian following a major outbreak which began in Italy in 1743. Although it is often called the Spanish flu, the strain that triggered the pandemic of 1918 most likely began elsewhere, although its origins are uncertain. Its name derives from a particularly severe outbreak in Spain.

Self-isolation, the measure of protection which involves deliberately cutting oneself off from others, is first recorded in the 1830s – isolate goes back to the Latin insulatus “insulated”, from insula “island”. An extended model of isolation, known as quarantine, is from the Italian quarantina referring to “40 days”. The specific period derives from its original use to refer to the period of fasting in the wilderness undertaken by Jesus in the Christian gospels.

Lockdown, the most extreme form of social containment, in which citizens must remain in their homes at all times, comes from its use in prisons to describe a period of extended confinement following a disturbance.

Many governments have recently announced a gradual easing of restrictions and a call for citizens to “stay alert”. While some have expressed confusion over this message, for etymologists the required response is perfectly clear: we should all take to the nearest tall building since alert is from the Italian all’erta “to the watchtower”.

This article was originally published on The Conversation by Simon Horobin at the University of Oxford. Read the original article here.