35 years ago, Dennis Quaid made the last sci-fi movie of its kind

“You just digested the bad guy.” 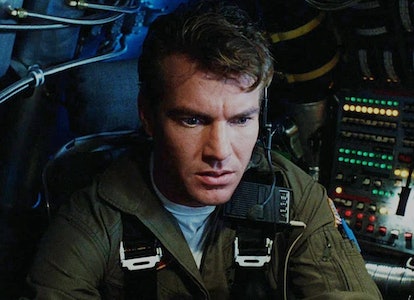 A chaotic, alcoholic military veteran volunteers for an experimental process that would miniaturize him, but a series of wacky hijinks keep him from being injected into a lab rabbit as initially planned. Instead, he gets jabbed into the body of a bumbling Safeway clerk. Together they must find the missing element to allow for re-enlargement, and along the way learn more about each other and themselves.

It sounds like the perfect outline for a broad buddy comedy with some goofy genre elements thrown in, something in the vein of Flubber or one of the old Road to... movies. But while Innerspace, which turns 35 on July 1, does have its comedic elements, it is first and foremost a sci-fi thriller that tackles international intrigue and Soviet era paranoia.

Innerspace, a 1987 movie directed by Joe Dante and executive produced by Steven Spielberg, could not be made today. While we now have countless sci-fi and action thrillers with their fair share of jokes (think Marvel’s endless one-liners), they’re always sci-fi movies with some comedy thrown in, not the other way around. Innerspace, however, has a perfect comedic premise, but lets the sci-fi elements drive the plot while the inherent goofiness supports every twist and turn.

The story revolves around Navy pilot Lt. Tuck Pendleton (Dennis Quaid) who loves a drink as much as he loves serving his country and is in a volatile love-hate relationship with reporter Lydia Maxwell (Meg Ryan). He signs on for a top secret mission in experimental miniaturization, but the operation goes wrong when the lab is attacked by a rival scientific organization.

While carrying a syringe containing Tuck in a microscopic submersible, the lead scientist is chased to a shopping mall and shot. Faced with no other options, he injects Tuck into the nearest person, a meek, hypochondriac Safeway clerk named Jack Putter (Martin Short) whose worst nightmare is made real when a voice starts speaking in his head. Jack and Tuck must join forces to defend the secret of miniaturization and get Tuck re-enlarged before he runs out of oxygen.

You can’t have a movie starring Martin Short not be funny. Jack Putter is an utterly incompetent man thrust into the leading role out of sheer necessity, and that’s what drives the majority of the humor. But the story takes itself completely seriously, even as it veers into face-swapping and drunken dance routines.

Today, this kind of sci-fi movie couldn’t be made without thrusting its tongue into its cheek with every joke it makes. Just look at Free Guy, another story about a normal man being thrown into an absurd sci-fi scenario. Yes, there are action elements, but it was advertised as a self-aware comedy. Innerspace is the anti-ironic movie, not once admitting to the fact that it’s funny.

Aside from its remarkable balance of tone, Innerspace is important because we wouldn’t have a beloved leading man without it. Stars Dennis Quaid and Meg Ryan met on set and eventually married, resulting in the birth of a son, Jack. Jack Quaid is now best known as Hughie Campbell in The Boys. Innerspace’s legacy may have been obliterated by snarky superheroes, but it now exists as an artifact where a goofy story can be a successful and captivating sci-fi thriller that keeps you guessing — and laughing.