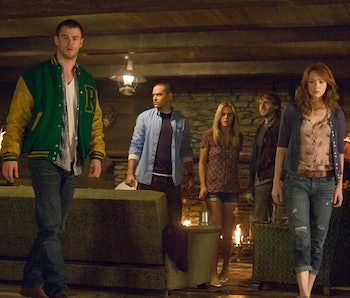 Horror has been around for long enough that its modern-day entries usually have to contend with genre tropes in some form or another. That’s especially true of horror movies, which have redefined how contemporary moviegoers see chainsaws, lonely cabins, Victorian manors, Halloween masks, and countless other pieces of horror iconography. As a result, most modern horror movies are forced to make a choice: either buck against their genre’s biggest tropes, or lean into them.

But in recent years, plenty of memorable horror movies have taken both approaches, and no modern film has done so quite like The Cabin in the Woods. Not only does the Drew Goddard-directed black comedy pay homage to its predecessors, but it bakes the genre’s past into its story in ways that are equally delightful and ruthless.

The Cabin in the Woods is simultaneously a bloody slasher flick, a workplace comedy, and a scathing satire. Part of what makes it such a fun viewing experience is getting to see how it seamlessly blends all those opposing genres and tones together.

Based on a screenplay written by Goddard and Joss Whedon, the film follows five American college students as they embark on a trip to a remote forest cabin that quickly and brutally goes awry. The film’s heroes are soon attacked by zombies, which isn’t the most original horror premise.

But that’s the whole point. Through a series of seemingly random scenes featuring a pair of beleaguered office workers, Goddard and Whedon make it clear that the film’s five leads have been intentionally placed in the kind of horror plot you’ve seen a million times before. While saying much more would spoil some of The Cabin in the Wood’s best surprises, the film ultimately uses its cliché plot to both satirize and pay tribute to the horror genre’s extensive history. But if you don’t know what’s coming, let’s just say that zombies aren’t the only iconic horror villains destined to appear.

While the film could have benefited from a bigger VFX budget, Goddard nails its satirical tone. He knows when to lean into the horror and when to let the movie’s darkly comic spirit shine. The scenes that dispatch our heroes are suitably bloody and allow Cabin to earn its place as a slasher flick, while the chaotic third act employs a handful of wide, static shots to further emphasize the deadpan comedy of the biggest moments.

The Cabin in the Woods has few missteps. It’s an incredibly well-structured, fittingly silly tribute to the horror’s greatest strengths and weaknesses. Few genre movies are as self-aware, and few ride the line between satire and horror as well as it does. It’s both a scathing critique of the horror genre and a tribute to it, like an admission of love accompanied by a playful rolling of the eyes.

The Cabin in the Woods is streaming on HBO Max.

More like this
Culture
Jan. 29, 2023
A 2011 Jake Gyllenhaal thriller reinvented the time travel movie
By Alex Welch
Culture
Feb. 2, 2023
After Harry Potter, Daniel Radcliffe Obviously Had to Play a Farting Corpse
By Alex Welch
Culture
25 minutes ago
Quantum of Solace Remains a Mess, But It Understands What Makes Bond Tick
By Mark Hill
LEARN SOMETHING NEW EVERY DAY.
Related Tags
Share: