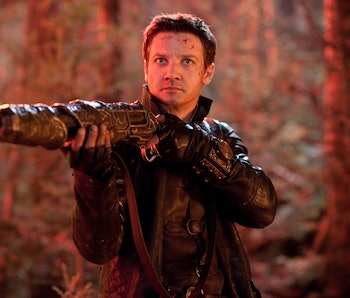 Hansel & Gretel: Witch Hunters is the latter, but was inexplicably presented as the former. It’s not odd that the Hollywood of 2013 decided the classic children’s fable needed buckets of gore, interminable lore dumps, a hard rock soundtrack, and cheap sex. What’s unusual is that this glorified Party Down gag was considered a showcase for Jeremy Renner, a prestige affair that would generate piles of cash for every glowering witch it reduced to giblets.

Yes, Jeremy Renner — he of the Jeremy Renner Official app — plays Hansel. Renner was just a year removed from The Avengers, and two from Mission: Impossible – Ghost Protocol. American Hustle would win awards months later. He could have done any movie but this. He could have done anything but this. But instead of staying home and playing with his dog, he chose to play a man with magic diabetes, to create a line on his filmography as inexplicable as a rotting egg salad sandwich in the Louvre.

Renner cashed his check and, to be fair, he gives the movie his all. So does his sister, Gemma Arterton. Together, they survive a childhood encounter with a hungry witch and grow up to be renowned witch hunters, traveling from town to town in a smelly, vaguely steampunk Europe to dispose of the local monsters. As our ostensible adventure begins, they’ve arrived in Augsburg, where they’ll uncover a plot by the witchcraft community to kidnap and sacrifice children for a ritual that will enhance their already significant evil powers.

It’s nice to read that Renner had a lot of fun making Hansel & Gretel, because it’s unlikely you’ll have any fun watching it. Oh, you can see what it’s going for, with its snarky one-liners and ludicrous setpieces. If you’re looking for an excuse to watch a Gatling gun be unloaded into a horde of hags during an “Epic Magic Battle Scene” then you’ll get your wish, even if you should maybe just get out more. But once the novelty of Renner cursing and popping heads wears off — and it doesn’t take long — it becomes impossible to forget that you are watching a movie called Hansel & Gretel: Witch Hunters.

Witch Hunters was also supposed to be a coming-out party for Tommy Wirkola, the Norwegian director who’d attracted the attention of both Hollywood and genre fans with his 2009 Nazi-zombie horror-comedy, Dead Snow. Wirkola, who most recently gave us Violent Night and is now threatening to release an animated musical comedy called Spermageddon, delivers exactly what he was hired to make. Blood is spilled, a boob is shown. The sinister design of the witches and a morally conflicted troll are both marginally clever, but mostly it’s just a parade of workmanlike slaughter.

Shaun of the Dead, The Matrix, Sam Raimi, Quentin Tarantino, and John Carpenter were all cited as influences, which at a certain point implies the message of, “We’re going to make a movie that’s movie-like.” Still, it would have been nice if any of these supposed influences had shone through. Instead the movie’s mostly just stupid, sometimes in a specifically 2013 way: Gretel is every bit a competent badass as her brother, but he gets to have hot sex with Pihla Viitala while she gets threatened with rape.

Wikipedia insists that Hansel & Gretel has achieved “Cult Status,” so let’s be clear: this is a bad movie. It doesn’t matter how tongue-in-cheek you are if you’re drooling everywhere. And yet it was profitable in a way that feels impossible now, far outstripping most of its grittily moronic fantasy reboot contemporaries — Jack the Giant Slayer, Abraham Lincoln: Vampire Hunter, I, Frankenstein — by raking in $226 million. If it were made today, it would be given a stripped-down title like Witchhunters, get dumped on Netflix, and never be thought of again. But this was a gosh darn theatrical event, one that many a YouTube commenter remembers with fondness.

It’s so dumb that it’s almost beautiful. Watching Hansel & Gretel is like watching a mangy, three-legged cat battle through its astigmatism to catch a mouse. You can’t help but root for it, even if maybe it should just be put out of its misery. It sounds like a backhanded compliment to note that Wirkola ran a drama-free production that stuck to its budget and schedule, but “Hey, competent foreigner, here’s $50 million to make your fever dream of a blockbuster idea” isn’t said much in Hollywood anymore now that sprawling franchises are strangling the box office.

And that’s a shame because, for as dumb as this movie is, it cannot be called unmemorable. It’s almost nostalgic to revisit a movie that was allowed to be this ridiculous and still be a smash hit. Audiences watch what’s put in front of them, and even revisiting this nonsense was a reprieve from yet another middling superhero movie. So God bless you, Hansel & Gretel: Witch Hunters, in all your hideous glory. Your kind may never be seen again.

More like this
Culture
Jan. 31, 2023
Final Destination 2 Perfected the Art of the Gross-Out Kill
By Jon O'Brien
Culture
Jan. 23, 2023
5 years ago, DC released the best Batman movie you haven't seen
By Laura Kelly
Culture
Feb. 5, 2023
Zombies Used to do More Than Eat Brains, and Wes Craven Showed Us How Scary Their Masters Could Be
By Josh Bell
LEARN SOMETHING NEW EVERY DAY.
Related Tags
Share: