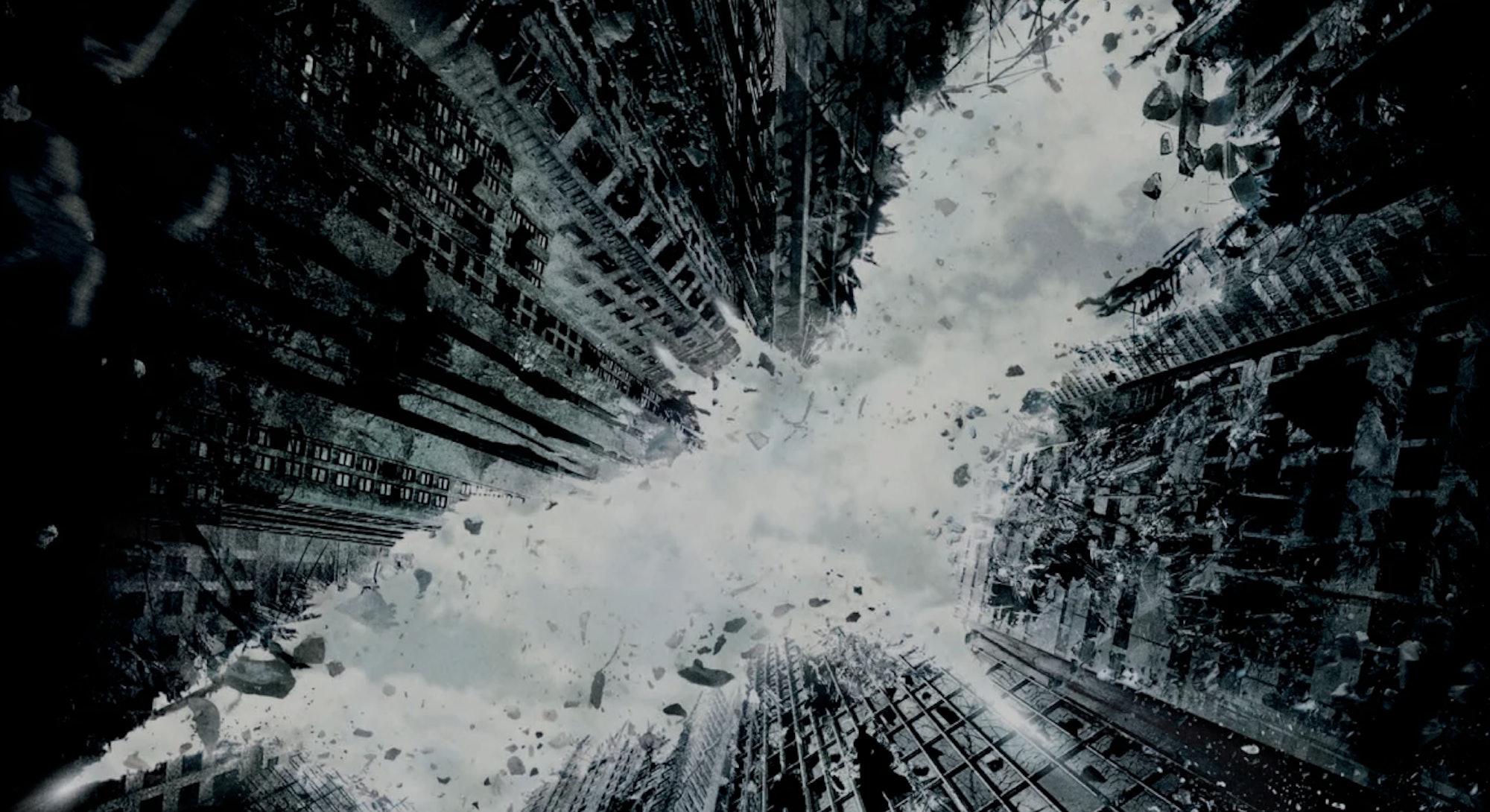 In 2008, Christopher Nolan was rightfully regarded as Hollywood royalty.

“Chris was the wonder kid,” executive producer Michael Uslan tells Inverse. “Nobody had more clout at Warner Bros. That gave him carte blanche to execute his vision without interference.”

With both Batman Begins and The Dark Knight, Nolan brought seriousness and depth to the superhero genre. This was even more impressive when you consider that 1997’s Batman & Robin was such a critical and financial disaster that many thought the character and genre might have been ruined forever.

“Every single setup has a payoff.”

Memorable, messy, and endlessly memeable, The Dark Kight Rises may not be everyone’s favorite Batman movie, but its importance to both the Christian Bale trilogy and the entire superhero genre cannot be overstated. Ten years later, its producer and one cast member reflect on how Christopher Nolan orchestrated his grand finale — and changed the movie industry.

“Christopher Nolan’s mission was to restore the darkness and dignity to Batman,” declares Uslan, who believes that Batman Begins, The Dark Knight, and The Dark Knight Rises should be regarded as one complete story, split into three movies.

“It is one of the most beautifully structured trilogies of movies ever made,” he continues. “Every single setup has a payoff. Every character has an arc. Everything that was planted along the way comes to life. I don’t remember talking to anyone who wasn’t brought to tears by the last five or six or seven minutes of The Dark Knight Rises. It’s really quite the accomplishment.”

Nolan’s achievement with The Dark Knight Rises is all the more remarkable when you consider that he had several issues to overcome before he finally agreed to make it. The release of The Dark Knight had been marred by the tragic death of its actor Heath Ledger, whose performance as the Joker was so remarkable he posthumously collected a Best Supporting Actor Academy Award for it.

As The Dark Knight kept on breaking box office records — while also being labeled the greatest superhero film ever made by many — Nolan took his time deciding whether or not to do another sequel. He even made Inception before finally signing up to bring his Batman trilogy to an end.

Out of respect for Ledger, Nolan decided not to recast Joker, which meant he had to figure out who the brand-new villain would be. Uslan never had any doubt Nolan would make the right choice, especially considering how successful Liam Neeson’s Ra’s al Ghul had been in Batman Begins, too.

“I was ecstatic that Ra’s al Ghul was in the first movie,” Uslan says. “There you had somebody that tied Batman to Bruce Wayne’s psyche. It was this incredible psychological unfolding of what makes a superhero a real person. Then, the Joker represented the line between insanity and chaos.”

So Uslan immediately understood why Nolan picked Bane as Batman’s next adversary. After making his comic-book debut in January 1993, the masked antagonist wreaked havoc on Batman. Not just through his brute strength, but also with his dastardly strategic intelligence.

“Bane represented the physical aspects of Batman’s villains. I was so happy when Chris made the decision to do that and show the physical side,” says Uslan.

Tom Hardy, whom Nolan had just worked with on Inception, was soon chosen to portray Bane. Nolan’s stock was so high that many of the finest actors in the industry were eager to join the beloved franchise.

“I’m going to have to kill you”

This included Matthew Modine, the star of Stanley Kubrick’s Full Metal Jacket. Modine had been hugely impressed with the original films, especially as they used “a sense of epic realism” to explore “the pain of a grown man still shackled to his past and the horrific deaths of his parents. They were more grounded and realistic than the other Batman incarnations,” Modine tells Inverse over email.

So when he learned of production on The Dark Knight Rises, he was the one who reached out to casting director Toby Whale.

“I wanted to see if there was an opportunity for me in the cast,” Modine says. “There was, and I subsequently met with Nolan during a casting call and was hired.”

“The black circles painted around his eyes made him look a bit like a raccoon.”

Despite the packed ensemble, Modine’s Deputy Police Commissioner Peter Foley still has a sturdy arc. He starts The Dark Knight Rises with a deep hatred for Batman that repeatedly obscures his choices and judgment, a stance that slowly softens as the film goes on.

Unfortunately for Modine, he didn’t actually get to share any scenes with Bale’s Batman. However, when they were shooting on Wall Street in New York, Modine did stumble into the actor just after he’d filmed an action scene, which gave him a unique look at Bale’s playful side.

“I was wandering around between setups, poking my head into the many rooms, and I opened a door and found Christian,” Modine recalls. “He had removed the cowl and was seated in a special chair built for him. I was shocked to see him without the cowl. The black circles painted around his eyes made him look a bit like a raccoon. He looked at me without expression and said in his flat, Batman voice, ‘Matthew. Now that you have seen me without the cowl, I’m going to have to kill you.’ It was brilliantly performed.”

When it came to Nolan’s intent with The Dark Knight Rises, though, Modine insists he didn’t have any such conversations. Instead, the director has complete and utter trust in the person he has hired for the job, whether they’re part of the cast or the crew.

“Nolan, like the best directors, is rather like a symphony director. It is the responsibility of each musician to study the piece of music being performed. For each to learn their parts and be thoroughly prepared,” Modine says. “Then, they show up, and the conductor fine-tunes and leads the musicians through the song. It’s a beautiful collaboration. Conducting musicians and directing films are quite similar.”

Modine had another poetic way of explaining the differences between Nolan and the other directors he has worked with: “He’s just different. It’s rather like making love. We all do it. But of course, we each do it a bit differently.”

“Hollywood has not been the same”

For Uslan, The Dark Knight Rises saw Nolan wrestle with themes of legacy and consequence, as Bruce Wayne wonders whether or not his efforts as Batman have actually made any difference to Gotham.

“Batman’s greatest superpower is his humanity,” notes Uslan. “In the process of becoming Batman and hoping he could make things better, Wayne constantly has doubts and wonders how, after all these years, things sometimes appear to be worse. He asks himself, ‘Am I making a difference? Am I making an impact?’ It is about our own individual legacies, which is something we all wrestle with.”

Ultimately, as The Dark Knight Rises progresses, the power of the symbol of the Batman becomes more prominent and inspiring.

“It’s about what the symbol means to society, Gotham, and humanity,” continues Uslan. “It shows that anyone has the power to step up and beat [Bane]. That’s an incredibly powerful statement, which has been at the core of Batman’s popularity for 85 years.”

Despite honoring Batman’s long and illustrious heritage that dates back to his comic-book debut in 1939, Nolan also managed to imbue all three of his Dark Knight films with a moral complexity that resembled the modern world of 2012.

“The world has changed,” Uslan says. “We are not in a black-and-white world of good versus evil. We are in a gray world. Today, it’s order versus chaos. Chris wanted to make everybody around the world believe that Bruce Wayne could be real today. That he could have post-traumatic stress disorder and be a young man on a journey of self-discovery.”

That’s why using real cities, like New York, London, and Chicago, to create Gotham on screen was so important.

“He wanted to make us believe Gotham City could be real, so he didn’t build it,” adds Uslan.

Such creative decisions are exactly why, 10 years after The Dark Knight Rises ended the series, the seismic impact of Christopher Nolan’s Batman trilogy still reverberates to this day. So much so that they are still the benchmark against which all other comic-book films are compared.

“Hollywood has not been the same,” Uslan says. “The comic book industry has not been the same. They all had to reflect the fact that people want a human story. They want in-depth characterizations. The old days of doing comic book superheroes as cardboard stereotyped characters doesn’t work anymore. When people walked out of The Dark Knight Rises, they didn’t have to say that was a great comic-book movie, they just said that was a great film. That is what Chris Nolan brought to the plate. He elevated everything.”