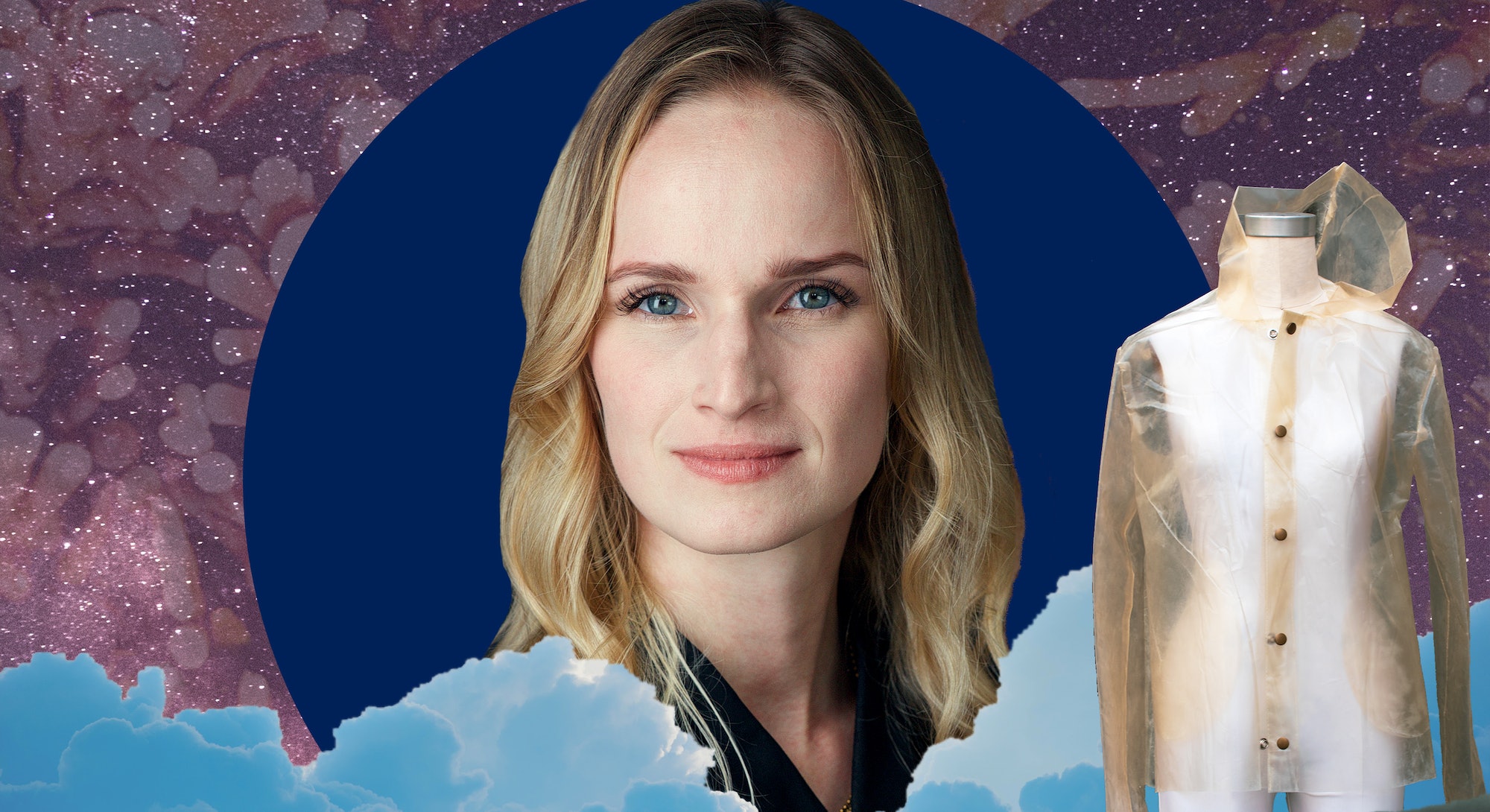 No. Instead, McCurdy is interested in the life you live now, and helping you keep it that way.

“The problem I am most interested in is the gap between people feeling like climate change is a problem, and then feeling unable to act on it, because the only stories they have been told are that the way to solve climate change is to give up their modern standard of living,” McCurdy says.

“That is a politically impossible story to tell. It is a really hard sell.”

Designer McCurdy, 30, weaves that new narrative of climate change action into the fabric of her work — literally. Standing in the Cooper Hewitt Smithsonian Design Museum, she presents me with a potential future and the culmination of her master’s thesis: a plastic raincoat.

At first glance, it is underwhelming. And that is the point.

“I took carbon out of the atmosphere; I fought climate change.”

“It was super important for it to be familiar and banal; it is not futuristic at all,” she tells me.

But this raincoat represents a future governed by climate change — albeit a positive one. Made from a plastic that is derived entirely from marine macroalgae, the raincoat’s “fabric” is in fact large sheets of biopolymer, shaped in a mold, cut to pattern, and stitched together with cotton thread. To give it its water-resistant properties, McCurdy coated the jacket using a plant-derived wax. As a garment, it may be unremarkable, but as a proposal for the future, it represents a way to effectively sequester carbon in a consumer-driven world.

“To me, climate change is the core problem,” McCurdy says. “We don’t have time to reinvent capitalism. So is there a way that we can use it, as imperfect as it is, as an engine to combat climate change?”

“As long as the coat is in its useful form, then it is sequestered carbon,” she says. As a result, the wearer is doing something to combat climate change, she says — not just doing something less bad, like recycling, which, while arguably better than sending waste to landfill, still produces carbon emissions.

Born and raised in New York City, where she still lives now, McCurdy takes a pragmatic approach to her work as an industrial designer. She isn’t trying to reinvent the system, but she is trying to change what goes in the system, the raw materials that power our world, and, in turn, changing what comes out.

“Our system around carbon and energy is so nonsense,” she tells me. “There is no reason formally to have this dependency on this carbon that is underground.”

And that is where the raincoat comes in.

“I took carbon out of the atmosphere; I fought climate change,” she says. “That is the feeling I want to be able to create.”

Both the fabric and the wax for the coat are McCurdy’s own creation, but the inspiration and sourcing came from something we are all very much familiar with: the food industry. The same macroalgae-based polymer the fabric is made of is used to make thickening gels like agar agar, which are used in the manufacturing of foods as diverse as ice cream to low-fat meat products.

To make the finished garment, McCurdy also drew inspiration from glass blowing. She ran innumerate tests, working to stop the macroalgae, which is seaweed, from drying into hard, shrunken, crinkled sheets, and instead to be pliable and transparent, like vinyl fabric.

“The molecules have all this tension in them like glass,” McCurdy says. “That is why they want to pull themselves into this tighter arrangement; that is why they start to buckle. So how do you cast in a way that is like, ‘No, you will not!’ And then get it to look how you want.”

Eventually, she hit on the right combination of humidity, temperature, airflow, and thickness to get the algae to form a fabric. She also created a solid black backpack from the same material, complete with a leather-like grain. The black coloration comes from a wood-based dye, she says. The raincoat, by contrast, is transparent, with a faint yellow tinge; this is the biopolymer’s natural color and state, she says.

McCurdy isn’t sharing the recipe, for now. While she doesn’t plan to patent or commercialize her technology, she also doesn’t want to divulge all her secrets yet, either.

“The future will not be the past. It is going to be different.”

Instead of selling clothes made of bioplastics, McCurdy wants to achieve something grander: to get you back into a present tense relationship with the Sun.

“We got super dependent on ancient sunlight, the stored chemical energy of these fossil fuels, and if we want to stop taking carbon from the ground and putting it in the air, then we need to figure out how to use sunlight now.”

The beauty of using marine macroalgae is that it is fed through photosynthesis, getting energy directly from the Sun.

“So, it is a raincoat to talk about climate change already being about extreme weather, but it is also a raincoat because I wanted something that spoke to that question of getting back to a present tense relationship with the Sun,” McCurdy says. “What would it feel like, to live in a material culture that was like that?”

“It is not going back to some pastoral, peasant lifestyle; it could be very much like the life we have now,” she says.

“So much of the rhetoric around climate change are stories of loss and sacrifice, and I think it is part of why people push it aside.”

Instead, McCurdy’s proposed future is one you can wear now.

“You can imagine it being in your life and actually using it and loving it.”

McCurdy’s approach to design reflects a life spent trying to reduce her personal carbon footprint. When McCurdy was 18, she stopped eating meat because it was the single greatest thing she could do to reduce her own greenhouse gas emissions. She was, she says, that “weird vegetarian” who did not care about animal suffering so much as she cared about climate change.

“I come at this from a very humanist angle,” she says. “Even when I was 18, climate change was connected to global poverty and agriculture and water access for people living their lives.”

Instead, climate change action “has to be focused on all 8 billion people and not just the people who shop at Whole Foods,” she says.

McCurdy’s work provides just a taste of what could be. While her raincoat is a one-off design, she is now working with a fashion designer — Phillip Lim, also known by his label 3.1 Phillip Lim — as part of One X One, The Conscious Design Initiative. The program, supported by Swarovski and the United Nations Office for Partnerships, brings people like McCurdy and fashion designers together. While their work is currently under wraps, we will be able to see the fruit of their collaboration at September 2020’s UN General Assembly meeting in New York.

Until then, McCurdy says one of the best ways to approach climate change is to give up the doom narrative that we have held onto for so long and take positive action.

“The future will not be the past. It is going to be different,” she says.

“Climate change is making sure of that. So it is a question of, ‘How do we embrace change and do the best we can with it?’”

Charlotte McCurdy is a member of the Inverse Future 50, a group of 50 people who will be forces of good in the 2020s.

Also read: A world where your clothes fight climate change is possible